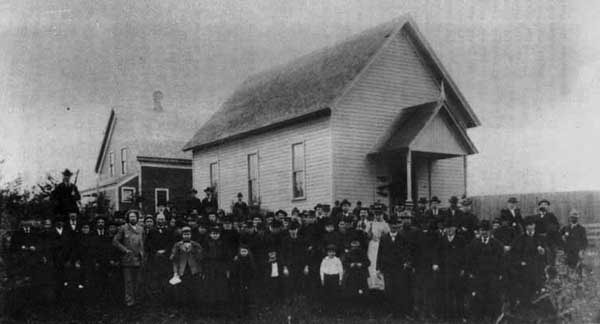 The first Ebenezer church building and parsonage in 1895 located at NE 7th and Stanton. Source: "Ebenezer Congregational Church Seventy-Five Years 1892-1967".
Reverend Johannes (John) Koch accepted a call from a group of about 100 people in Portland and took charge of the congregation on April 17, 1892. Many people had known Johannes Koch in Russia where he served as a schoolteacher in the German colonies. In 1871, at the first Brethren Conference which was held the colony of Brunnental, Koch and Heinrich Peter Ehlers were elected as evangelists and colporteurs. These two men, along with Rev. Wilhelm Stärkel from Norka, were the three principal leaders of the Brotherhood movement amongst the Volga colonists. All three men were all ardent Millennialists and took an active role in the Zionist movement of their day, lecturing on its behalf and supporting it financially.

Koch arrived in the United States around 1882. He was ordained as a German Congregational minister in Endicott, Washington through an interpreter, since he could not understand English. In the states of Oregon and Washington he found scattered groups of his former countrymen who were without a pastor. His first churches were in Ritzville and Endicott, Washington. Rev. Koch became the leading force of German Congregationalism on the Pacific Coast, and it was largely through his influence that the Volga Germans in Washington, Oregon and California were brought into the fold of this denomination.

After his arrival in Portland, Rev. Koch soon organized the First German Congregational Church, which was simply known as Ebenezer, a name often given to Protestant houses of worship. Ebenezer derives from the Hebrew ebhen ezar  or "stone of help" which originates from the name of a stone raised by Samuel to commemorate a victory over the Philistines at Mizpeh.

Then Samuel took a stone, and set it between Mizpeh and Shen, and called the name of it Ebenezer, saying, Hitherto hath the Lord helped us. -- I Samuel 7:12

The Articles of Incorporation for the Ebenezer Church were to be filed on August 1, 1892 according to the Sunday Oregonian published the prior day. The filing allowed the congregation to obtain a deed for the lot it had purchased at 7th and Stanton for the proposed house of worship. The newspaper article reported that Rev. H. V. Rominger, pastor of the Congregational church in Holladay's Addition, was greatly interested in the new church organization and hoped that the wealthy Germans of the city would aid in the erection of the new building.

The October 1, 1892 edition of the The Morning Oregonian reported that about $300 was raised at a meeting of the State Association of Congregational Churches held in Forest Grove for the construction of a new Congregational church in Albina. "This, together with liberal gifts from friends of the cause in the city, will insure the speedy erection of the church building for these needy people, most of whom are refugees from Russia, whence they were driven by persecution." Architectural plans for the church were drawn by Otto Kleeman, who did the work free of charge. Kleeman is well known for designing The Oregonian building and the monastery at Mt. Angel.

The following people were charter members of the Ebenezer Church:
The majority of these families had been members of the Brethren movement in the Volga German colony of Norka, Russia.

The Ebenezer Church building was erected on the corner of NE 7th and Stanton in the fall of 1892. Before the first church was finished, Rev. Koch confirmed a class of young people in the home of John Krieger, Sr.

The new church building was dedicated on December 18, 1892 and Rev. J.J. Staub of Sunnyside provided the sermon in the German language followed by several pastors from the city who spoke in English.

The following excerpt is taken from a letter, dated February 6, 1893, in which the Rev. Koch depicts the religious life of his Volga German congregation in Portland:

We have not had a single evening without a meeting since Christmas. Last week our Brethren felt that the evenings would no longer suffice. We therefore had meetings in the houses hither and thither, beginning at nine o’clock every morning and closing at nine o’clock at night. People who were considered to be beyond the reach of grace have been carried along by the power of the revival. Old perverse sinners, drunkards and hardened men, down to children of fifteen, have been reached and have humbly sought forgiving grace. Last Sunday we had reception of members. The church was packed full. Forty-eight converts gathered about the altar. All freely confessed Christ as their only Savior, after a very searching address.  Then they were strongly exhorted to steadfastness in the Christian life and the Apostolic Confession of Faith was read to them, to which they all responded with a loud ‘yes.’  Then while the church sang the hymn:

‘To each other we give in covenant

I gave to each the right hand of fellowship. Then all went down on their knees, sometimes a half-hour at a time.  Every man wanted to thank the Lord that he had sought him and found him and given him his hand of fellowship… Thus the work goes on.  God be praised!

This was known as the glorious revival of the winter of 1893, in which, nearly one hundred souls were saved, the majority of whom became members of Ebenezer Church.

Reverend E. Grieb became the first resident pastor and served the congregation from 1893-1895. Reverend Grieb was educated in Germany and had the desire to be a good pastor. However, the more conservative members of the church accused him of not being a 'real' Christian whenever he suggested that they do anything different from what had been customary in Russia. As a result, he was forced to leave the church in 1895. Rev. Koch was asked return as leader of the church. It was at this time that the parsonage was built south of the church (now 2831 NE 7th).

The Pacific Conference of German Congregational Churches, covering the states of Oregon and Washington, was organized on March 5, 1897 at the Ebenezer German Congregational Church in Portland led by the following ministers and delegates from Portland: Rev. Johannes Koch, Brothers Peter Yost, John Krieger and Conrad Yost. Rev. Jacob Hergert, who was serving the Evangelical Lutheran church in Endicott, Washington at the time, was also present. Thirteen churches were received into the conference at its founding.

On April 29, 1898, the Irvington Park Race Track was requisitioned as Camp McKinley, an encampment for the federalized Oregon National Guard which was being sent off to the Philippines to fight in the Spanish American War. One hundred sixty one tents were pitched on the grounds until the camp was disbanded around May 19, 1898 when all federal property was removed. The Ebenezer Church was located directly across 7th Avenue from the encampment. 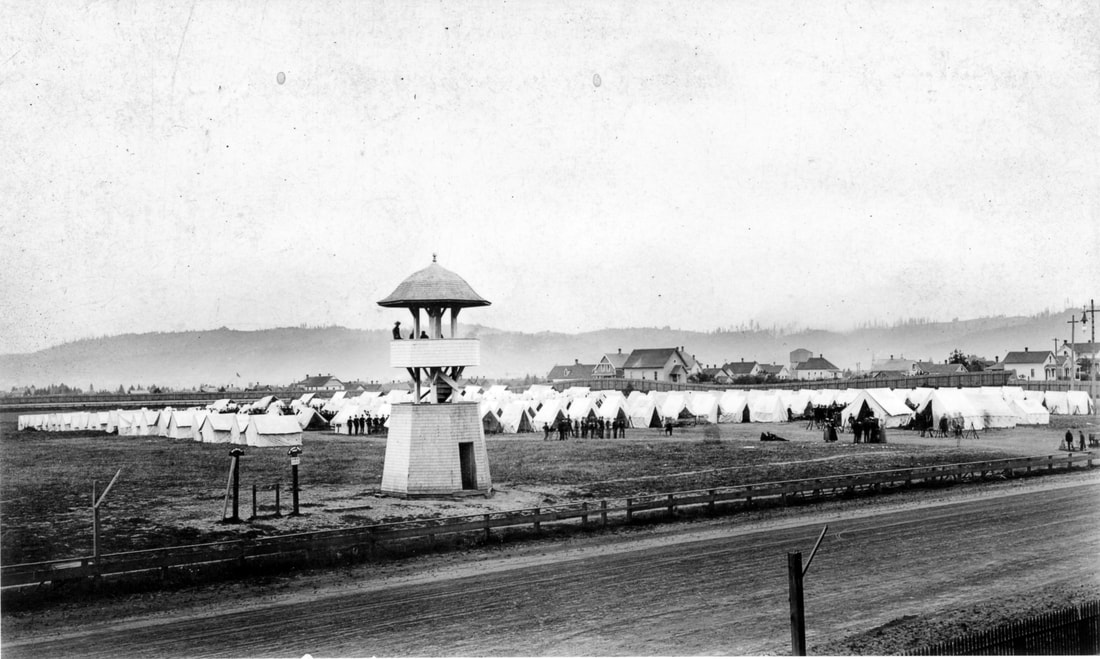 Camp McKinley, Irvington Race Track, East Portland. Spanish American War. Circa 1898-99. The Ebenezer German Congregational Church (established 1892) is the large building shown behind the fence and closest to the tents. Digital image used with the permission of the Oregon Historical Society Research Library (Image bb006844).
Following the departure of Reverend Koch in 1899, Reverend John C. Schwabenland served as pastor beginning in the fall of 1900. Upon his arrival in Portland, Reverend Schwabenland found that some of the brethren, led by Conrad Yost, felt that they should conduct the church services without the assistance of a pastor. One Sunday Morning. Rev. Schwabenland arrived at the church to find that some of Brethren had locked him out and they refused to let him conduct services.  An investigation into the conflict by neighboring pastors found the charges leveled against Rev. Schwabenland as "absurd", but the damage had been done and he resigned and returned to California with his sisters in 1901.

A large group of the disaffected church members broke award from the Ebenezer Church at this time and chose Brother Peter Yost (the brother of Conrad Yost) to lead the new Free Evangelical Brethren Church in December 1900.

Reverend Jacob Fath, reportedly one of the most outstanding ministers in the German Congregational field, led the church from 1901 until 1903. Reverend Fath was born in Germany but came to the United States as a child in 1846. He was converted while serving as a soldier in the American Civil War and decided to become a minister. Reverend Fath’s two and one-half years in Portland left a lasting impression on many members of his congregation.

In June 1903, Reverend Johannes (John) Hopp became pastor of the church. He was ordained on July 27, 1903. During Rev. Hopp's pastorate the construction of a new and larger church at NE 7th and Stanton was begun (currently 636 NE Stanton). The original church building was moved three lots to the west on Stanton Street (currently 606 NE Stanton) and converted into apartments. 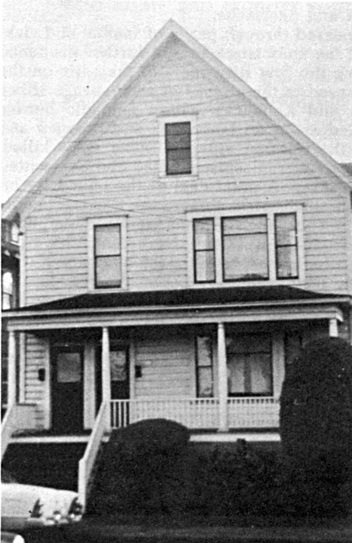 The original Ebenezer church building in the 1950's. Source: "Ebenezer Congregational Church Seventy-Five Years 1892-1967".
The following text is from The Sunday Oregonian, November 20, 1904:

German Church Is Completed. -- The German Congregational Church, Stanton and East Seventh streets, Rev. John Hoppe [sic], pastor, is practically completed, but it will not be dedicated until the Sunday before Christmas. It is yet to be furnished. The church is a beautiful building, and will cost when furnished $6,000. 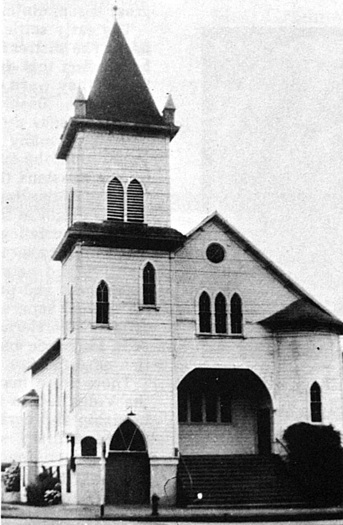 H.P. Sinner, the secretary for the Ebenezer Church, recorded that in 1914 membership included 191 members (94 males, 97 females and 127 families) with 23 new admissions. The report shows that 132 members were "Removed" through resignation. Presumably these are the people who that left the congregation with Rev. Hopp to organize the Zion German Congregational Church.

With the departure of Rev. Hopp, Rev. F. A. Willman began his leadership of the Ebenezer church in 1914. During this time, more Volga Germans continued to arrive in the city. Rev. Willman reported the following in the Minutes of the Congregational Conference of Oregon published in 1915:

This church makes a good showing. Membership increased 25 percent. Attendance increased fourfold. Addition built to the church increasing seating capacity; cost $1,000; all paid for. The average attendance at the Sunday School is 198; attendance at Christian Endeavor, 160. The spiritual life of the church is most gratifying, and is in evidence at every service. Our prayer meetings are well attended.

Rev. George H. Graf became pastor of the church in 1924 and served the congregation until 1933.

Rev. Hugo Becker was called in 1935 and he served the church until 1948. During his pastorate the church celebrated its 50th Anniversary. Rev. Becker was sent to Germany after World War II to work with prisoners of war and displaced persons who needed assistance.

Reverend J. S. Gyorog was the last full time minister of this church serving from 1958 until he passed away suddenly in the latter part of 1984. Rev. Gyorog was the longest serving pastor of the church and was respected by everyone in the community. During his pastorate the church celebrated its 75th Anniversary in 1967.

Dr. Daniel E. Sauerwein served as part-time pastor for four years from 1985 to 1989 and Dr. Anthony Casurella ministered to the congregation until 1992.

Descendants of the first Volga Germans in Portland continued to hold services at the Ebenezer Church as late as May 31, 1992 when the church was cleaned and polished for the 100th Anniversary celebration.

Ribbon commemorating the 100th Anniversary of the Ebenezer Church in 1992. Source: Steven Schreiber.
At the time of the 100th Anniversary, church membership was in decline primarily because of social changes in the neighborhood. These tensions resulted in the movement of members to other parts of the city where they found new places to worship.

After much prayer and tears, the small remaining congregation decided to disband. The last service for the Ebenezer Church was held on Easter Sunday, April 3, 1994.

The church property was sold to the Northeast Community Fellowship Foursquare Church. The pastor of this primarily African American church grew up in the neighborhood and frequently rode his bicycle past the church where he could hear the congregation singing and worshipping. His desire was to someday be pastor of this church and his wish was granted! 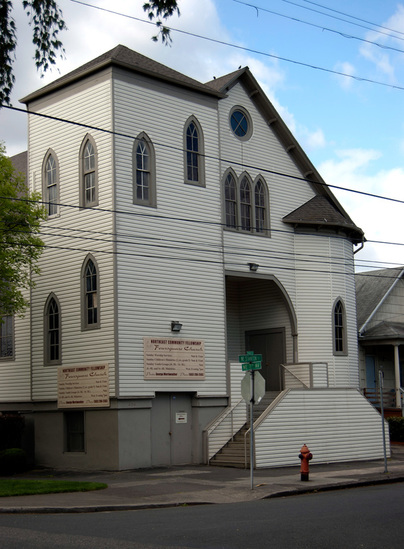