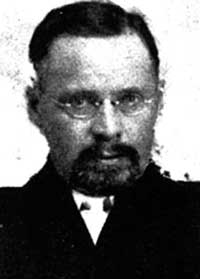 Rev. Edmund Greib was educated in Germany and had a desire to be a good pastor serving the Ebenezer church from 1893 to 1895. The more conservative members of the church accused him of not being a true Christian when he suggested that they do anything different than what had been customary in Russia. As a result, he was forced to leave the church in 1895. The church founder, Rev. Johannes Koch, was asked to again take charge of the church.