On February 4, 1871, Conrad married Elisabeth Spady. Elisabeth was born November 3, 1850 in Norka. Her parents were Heinrich Spady (born 1829) and Elisabeth Ross. The marriage ceremony was performed by Pastor Christoph Heinrich Bonwetsch in Norka.

Conrad, Elisabeth and their children arrived in Lincoln, Nebraska on August 5, 1890. Shortly thereafter, they traveled to Portland (at that time Albina) where they arrived on October 12, 1890.

In 1891, the family was living on the north side of Tusculum Street. two blocks east of Margaretta Avenue (in 1891 this street became Union Avenue and is now MLK Blvd.).

Conrad and Elisabeth were among the founding members of the Ebenezer German Congregational Church in 1892.

Conrad's brother, Peter Yost, was also a founding member of the Ebenezer Church, but later left and founded the Free Evangelical Brethren Church.

On September 2, 1894, Heinrich Peter married Elisabeth Repp in Portland. The wedding ceremony was performed by Pastor Edmund Grieb. Elisabeth was the daughter of Heinrich Repp and Margaretha Fink from Norka.

​By 1900, the Yost family was living at 398 Constance Street and Conrad was working as a teamster (a driver of a horse drawn wagon used for hauling).

Magdalena was confirmed at the Ebenezer German Congregational Church in 1903.

In 1910, Conrad and Elisabeth were living at 767 Grand Avenue N. with John, Conrad Jr. and Magdalena. Magdalena married Alexander Miller on on June 1, 1910 at the Ebenezer church. 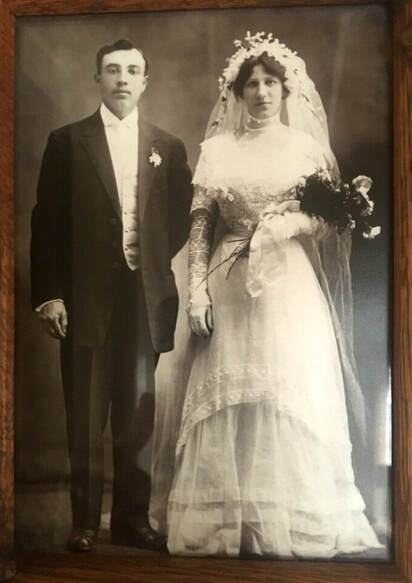 By 1920, Conrad and Elisabeth were living on Woods Creek Road in West Philomath, Oregon with their sons John and Conrad Jr. who were partners in a farming operation.

At the time of the 1930 census, Conrad and Elisabeth had moved back to Portland with John and Conrad Jr. They lived at 327 Fremont Street. John was working as a longshoreman and Conrad Jr. was a truck driver.

​Elisabeth died on January 30, 1931  and is buried at the Rose City Cemetery in Portland.