The Deutsche Evangelische Sankt Pauls Kirche (the German Evangelical Saint Pauls Church) dates its beginning to June 1904 when Pastor F. H. Freund, the newly appointed Home Mission Secretary of the Deutsche Evangelische Synod von Nord Amerika (German Evangelical Synod of North America), organized the congregation with forty men and placed it under the leadership of Rev. Jacob Hergert. ​
After initially serving several Congregational churches in the Palouse country of Washington State, Rev. Hergert moved to Portland, Oregon in 1904 where his work began to establish St. Pauls Church which was part of the German Evangelical Synod. Many of the families who founded this church had previously lived in the pietistic Lutheran and Reformed Volga German colonies of Brunnental, Grimm and Norka, Russia.

Meetings were first held in a rental hall above a hardware store on Union Avenue (now Martin Luther King Blvd). Rev. Hergert and his congregation soon began to plan for the construction of a church building. A site at the northeast corner of NE 8th Avenue and Failing Street (801 NE Failing) was chosen. According to City of Portland records, the construction of the church was completed in 1904.

Hergert served as pastor of the church from its inception until he became ill in 1921, a total of 17 years.

Rev. Conrad Bitter stepped in to serve the congregation from 1921 to August of 1923 when he was called to the Wartburg Lutheran Church in Fresno, California.

Rev. Jacob Hergert died in 1923 and Rev. Elias (Eli) Hergert was invited to follow his brother Jacob in serving the church, but he did not accept this position until 1925. 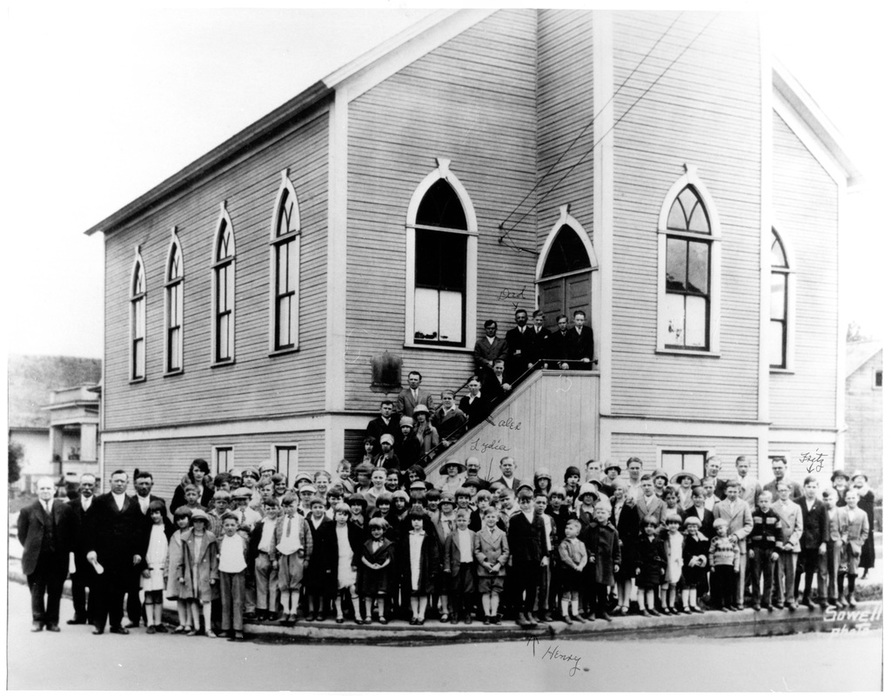 The Sunday School classes of St. Pauls Evangelical and Reformed Church circa 1925. Photograph courtesy of Esther Schreiber (née Schmidt) who identified her father and four siblings. The photo was taken by Franklyn S. Sowell, who was known as "The Photograph Man who Made Pictures Anywhere, of Anything, At Any Time." Sowell owned and operated a studio in downtown Portland.
Rev. Elias Hergert was born on June 22, 1878 in Brunnental, Russia and immigrated to the United States in 1907. The church flourished under his charismatic leadership. Virginia Millar (née Schott) recalls that Pastor Hergert directed the choir for many years before turning that responsibility over to his son, Solly. Pastor Hergert and his sons, Solly, Eli and Jake formed a fine quartet and their sister Mary accompanied them on the piano. Elizabeth Nagel (née Schott), Rosie Seibel and Lydia Nagel formed the women's trio. Lydia Danewolf played the pump organ.

The St. Pauls Choir performed during the Christmas season at the display set up by Henry Danewolf on a vacant lot next to his grocery store. The choir stood behind a lighted church in the center of the display and sang songs in German. Their voices were amplified through loud-speakers for the spectators to enjoy.
The Sonntagsschule (Sunday school) was held in the back pews of the sanctuary since there were no classrooms. The classes included singing, Bible lessons, and explanations of the lessons by a teacher. Virginia Millar's uncle, Jack Nagel, served as the Superintendent for many years and Molly Erdman was the Secretary. Jacob Greb, Henry Greenwald and Alex Smith (Schmidt) all served as teachers.
The German Evangelical Synod of North America became the Evangelical Synod of North America in 1927. In 1934, the Evangelical Synod of North America merged with another German denomination, the Reformed Church, and became the Evangelical and Reformed Church. As result, St. Pauls was renamed from St. Pauls Evangelical Church to St. Pauls Evangelical and Reformed Church.
In 1938, Rev. Hergert led an effort to enlarge and remodel the church. The addition created a new and larger sanctuary and a steeple was placed above the relocated entry door which was lowered to the ground level. The original rectangular building was joined with the new structure which extended to the east. German born architect, Ernst Kroner (1866-1955), who came to Portland in 1899, designed the addition. Some of Kroner's design drawings obtained from the Oregon Historical Society Research Library are shown below. 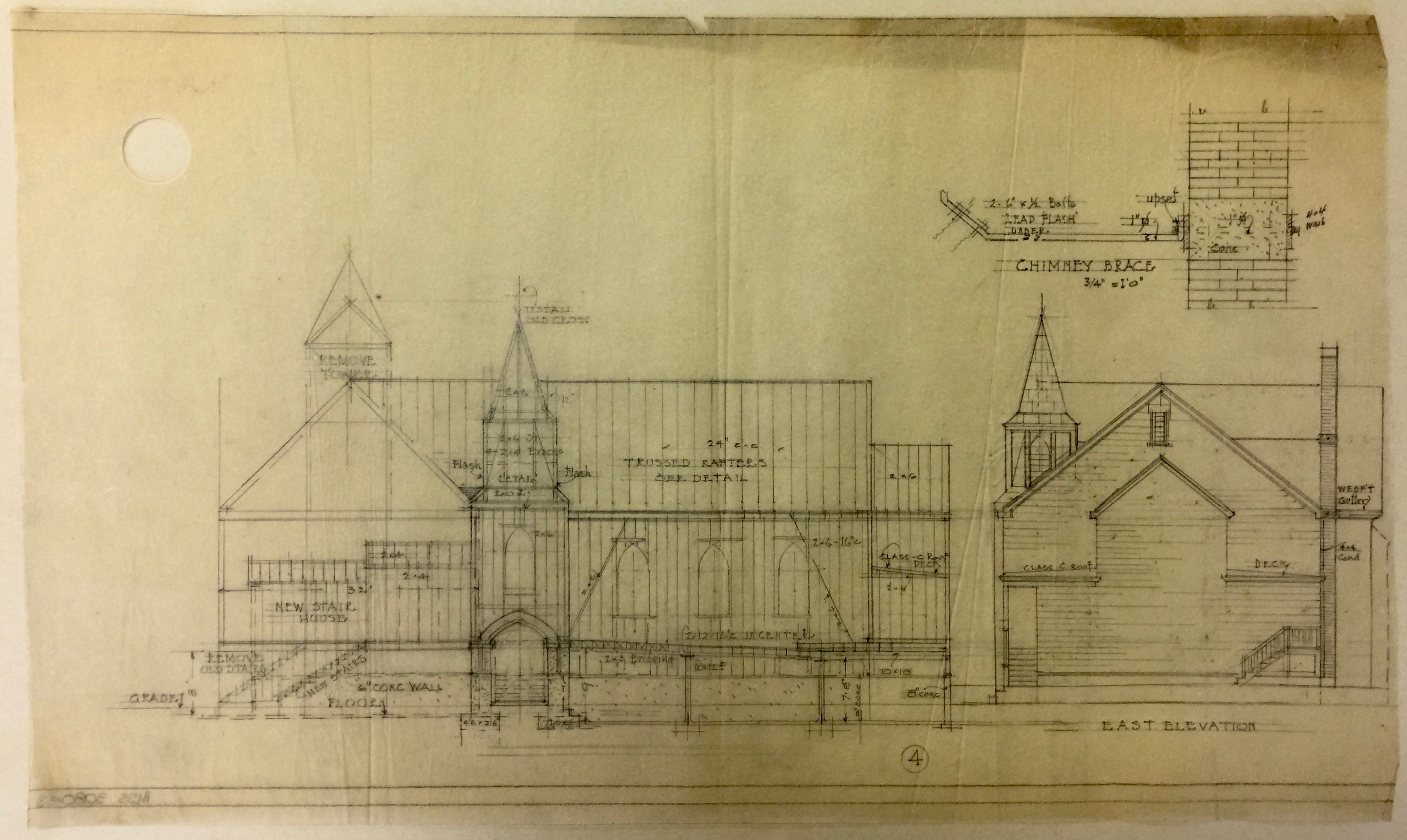 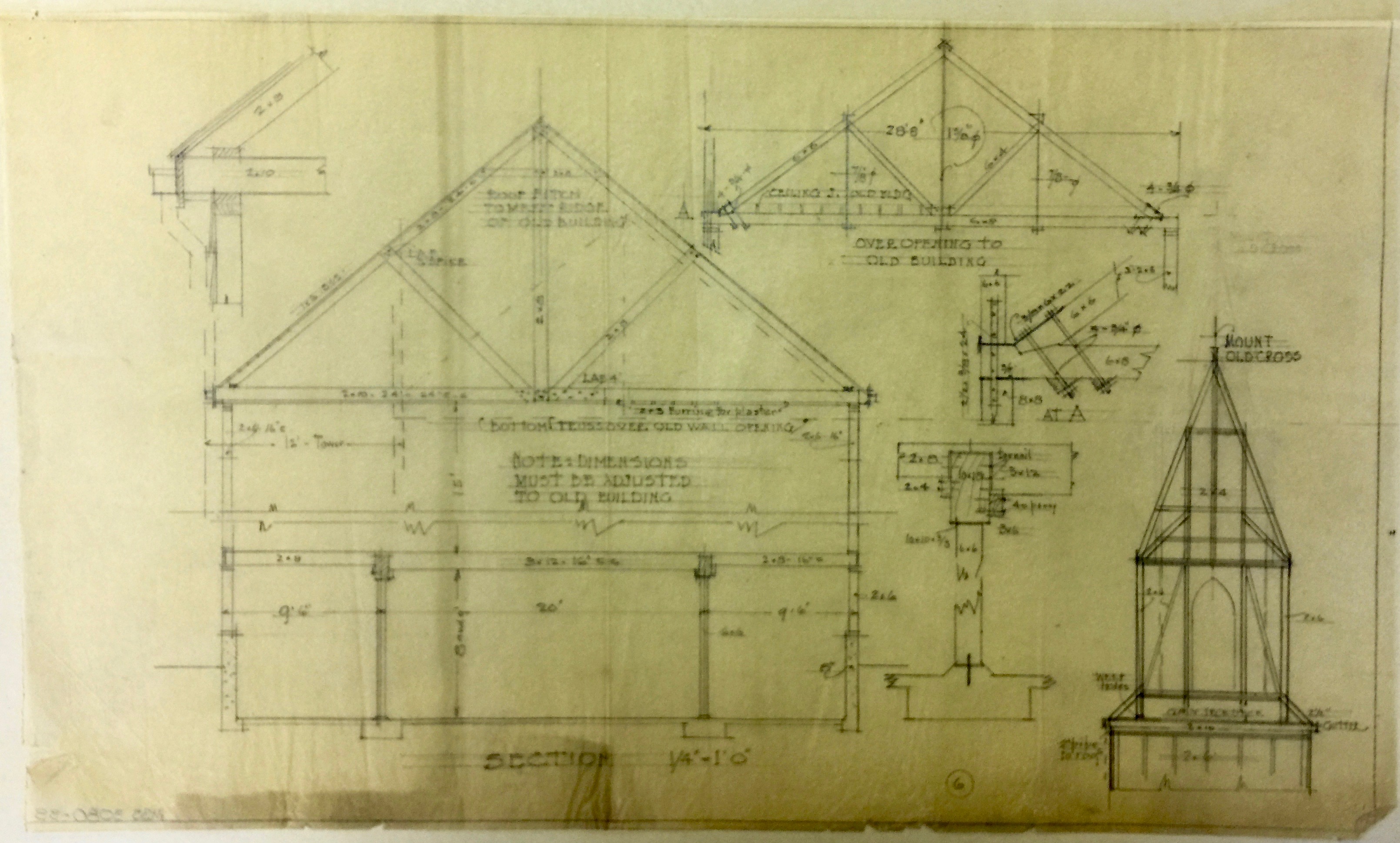 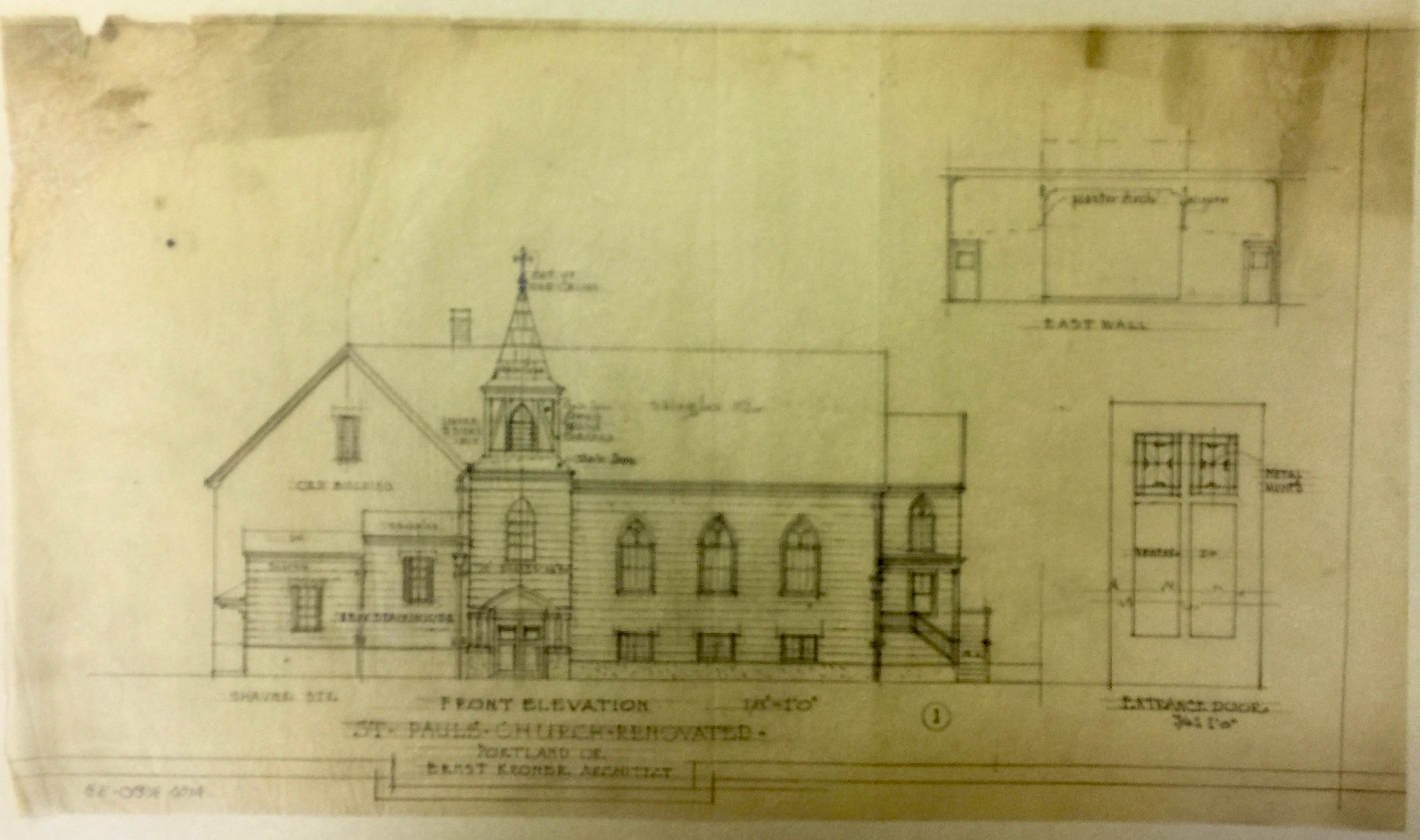 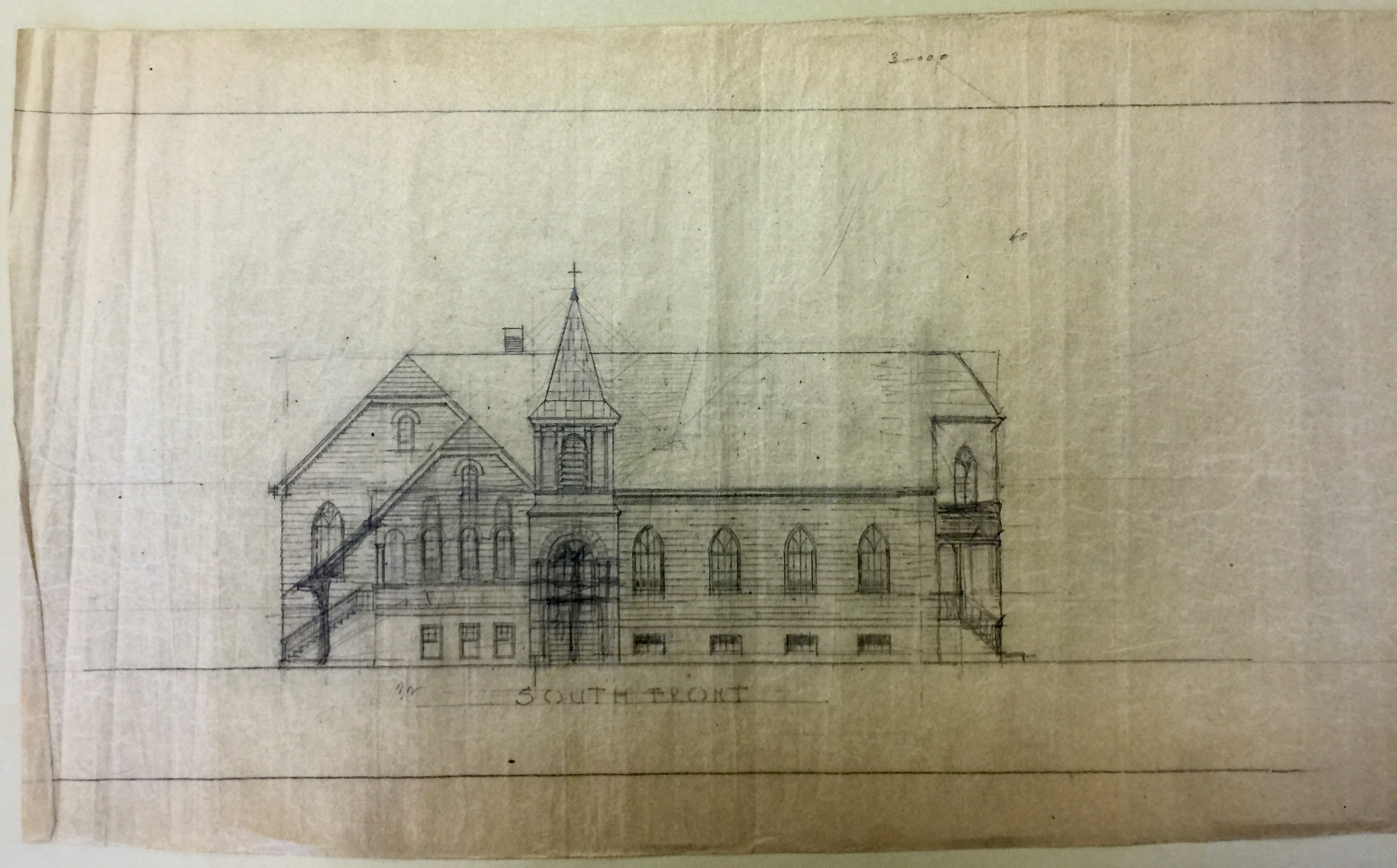 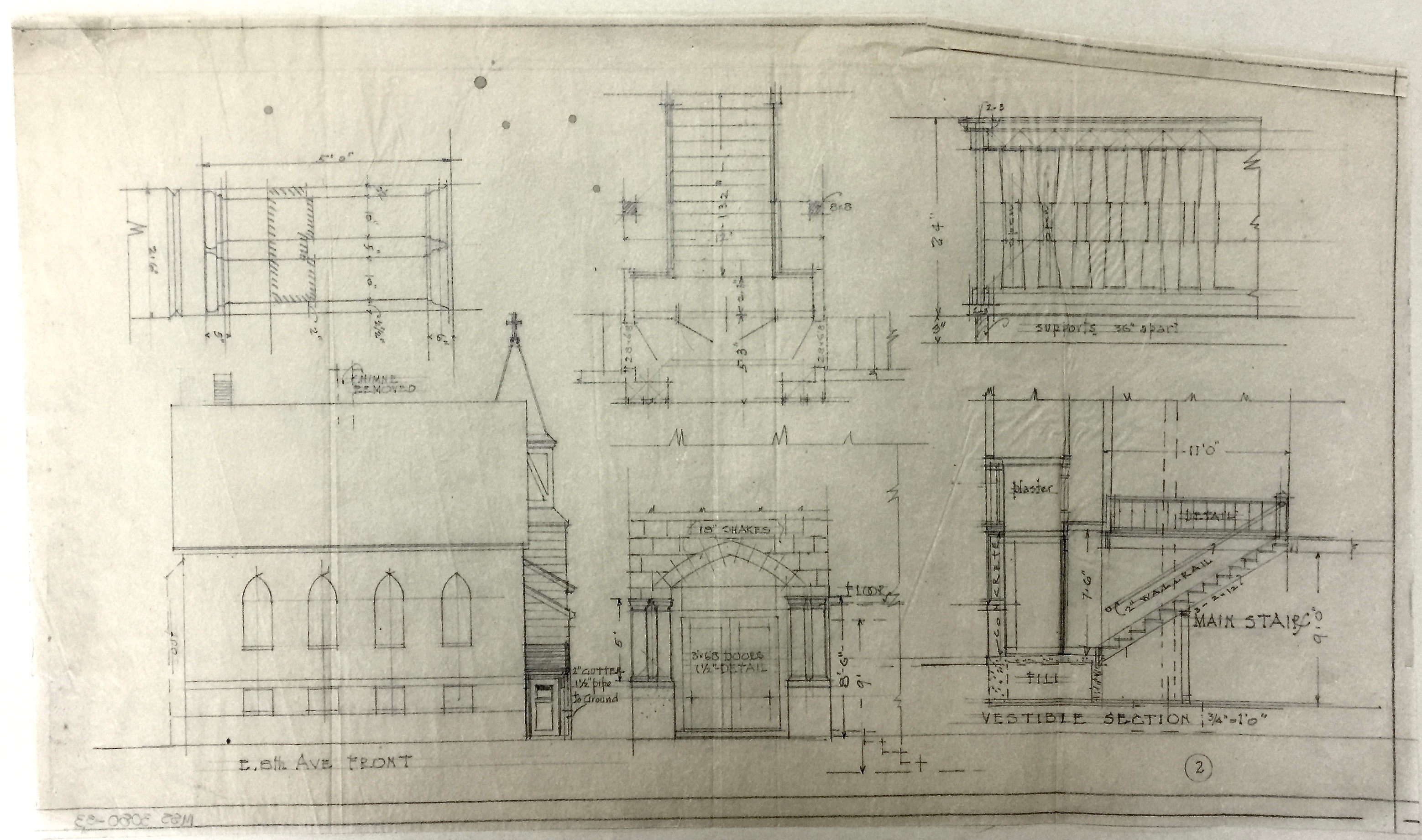 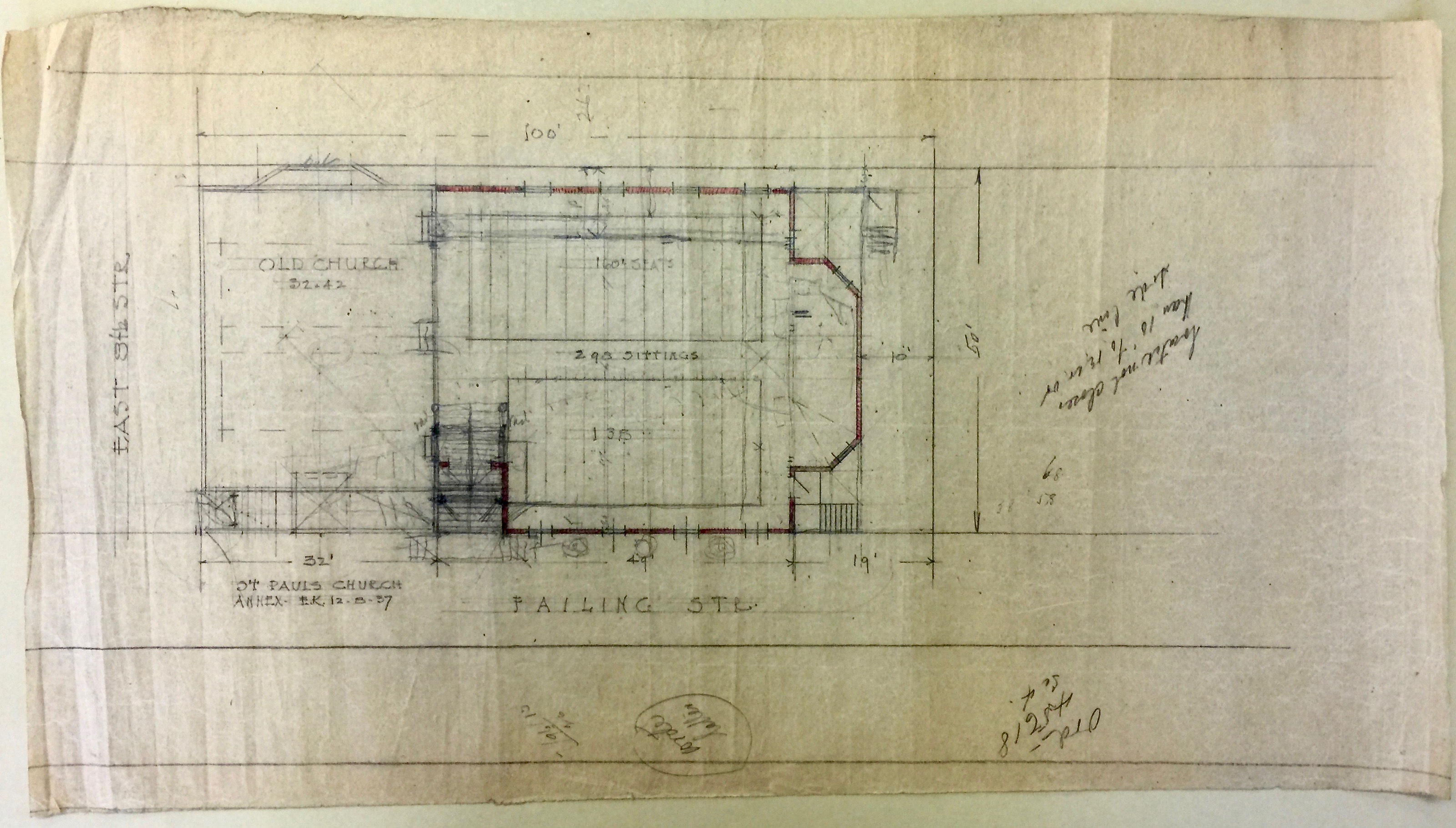 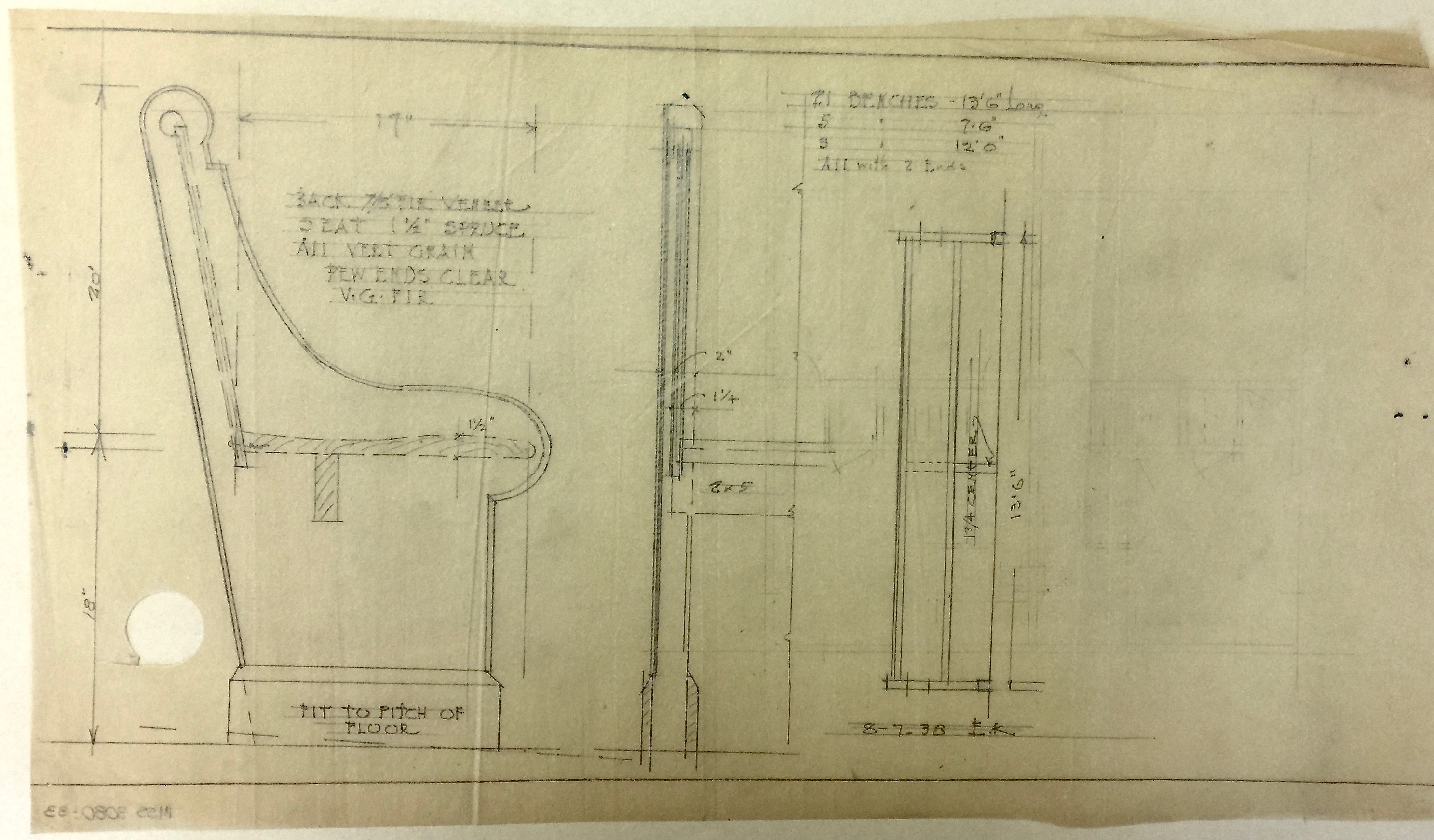 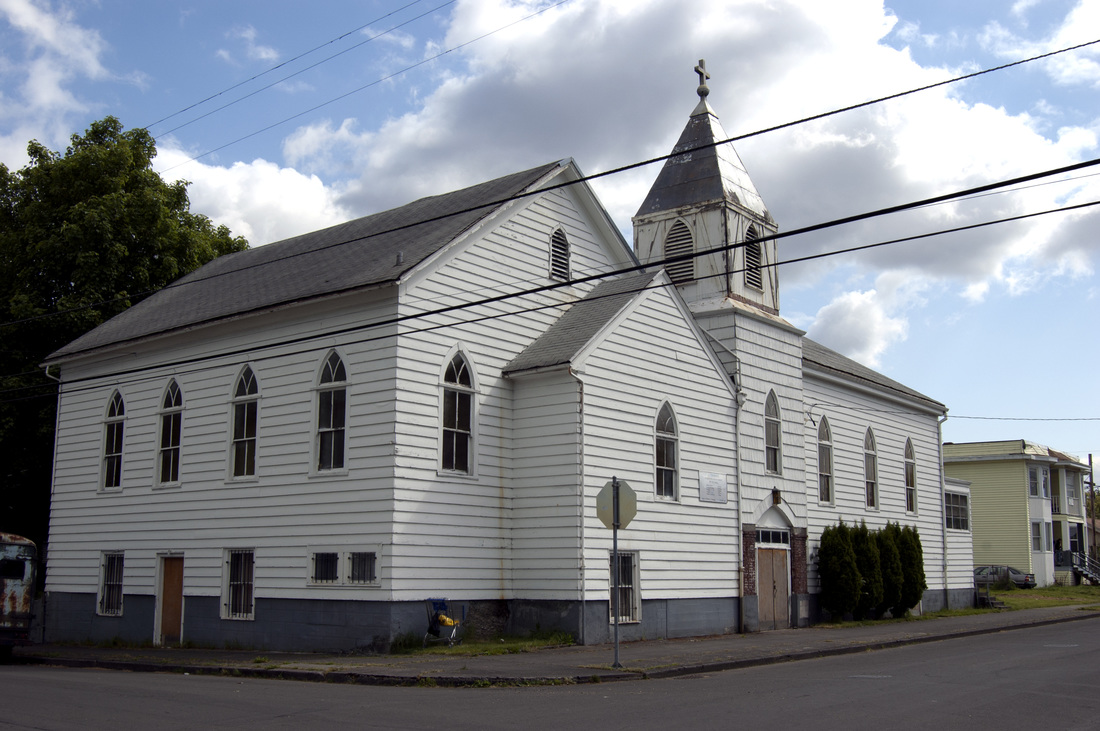 The former St. Pauls Church in 2006. Photograph courtesy of Steve Schreiber.
On November 6, 1938, a Kirchweihfest was held. The Kirchweihfest is an ancient religious festival and celebration that is traditionally held upon the consecration of a Christian church building.

As part of the Kirchweihfest, the newly enlarged and renovated church building was dedicated by a group of visiting ministers including the Rev. Charles Warber, President of the Pacific Northwest District of the Evangelical and Reformed churches who spoke in German. The choir was led by Sollie Hergert. All of the neighborhood churches were invited to the afternoon service where the Rev. Gottlieb Hafner preached in German and the Rev. I. G. Nace, Executive Secretary of the Portland Council of Churches, spoke in English. Bertha Hein was the featured singer. Rev. Hergert officiated the public dedication in which all neighborhood ministers were asked to participate. A youth meeting was held which included a union of all the Evangelical and Reformed churches in the neighborhood. Rev. C. F. Howe and Rev. Charles Hoffman spoke at the youth meeting, in German and English respectively. The evening service featured Rev. Paul Jueling (Tacoma) and the Rev. H. Becker, who both spoke in German and Judge Jacob Kanzler who presented in English.

It was a special day for all who attend the St. Pauls Kirchweihfest. They felt a sense of pride in the fact that the old religious traditions continued to sustain their community.

A special work of art was added to the church soon after the Kirchweihfest. A mural canvas painting titled The Lord is My Shepherd, which was created by a well-known Portland artist Colista Dowling, was presented and dedicated on Christmas Eve (December 24, 1938). The large mural (6 ft. high and 12 ft. wide) was commissioned by the eight children of Mr. and Mrs. Jacob Erdman (Emma, Alexander, Amalia, August, Mary, Emily, Jacob and Walter). Colista Dowling was a friend of the Erdman family. The mural was proudly displayed at the front of the church behind the altar and choir loft. 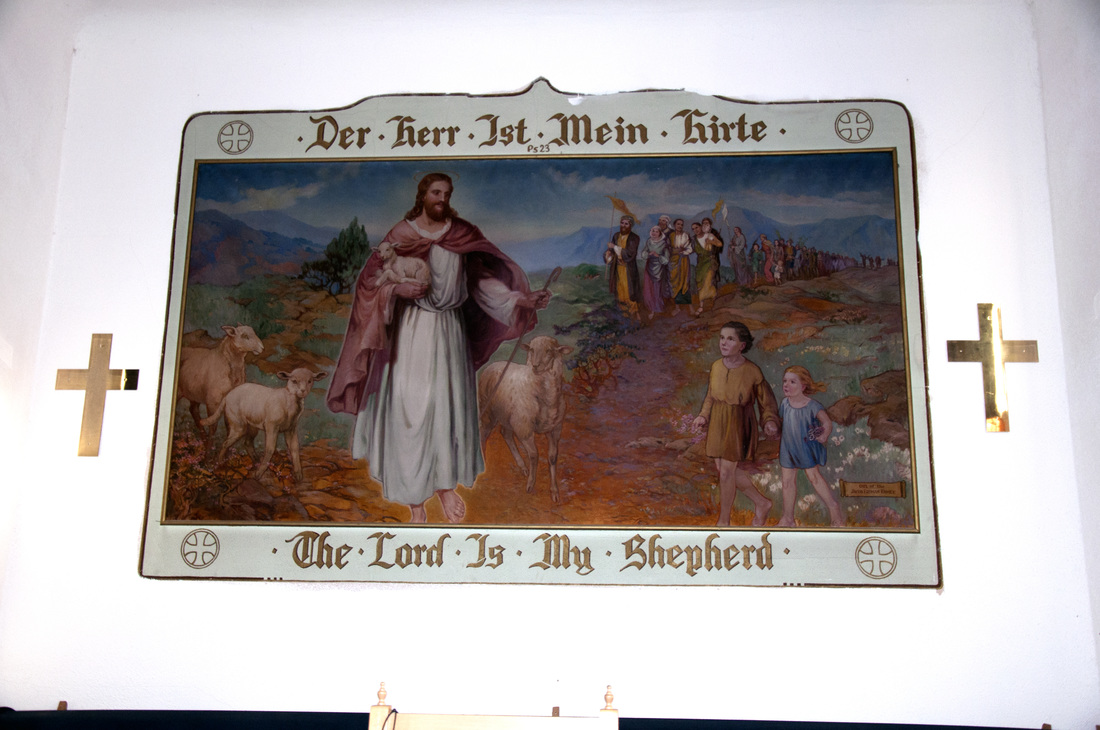 The Colista Dowling mural titled "The Lord is My Shepherd" was donated to the church by the Erdman family in 1938. The mural was donated to The Center for Volga German Studies at Concordia University and was professionally restored and displayed at the Concordia University Library in Portland. Subsequent to the closure of the university in 2020, the mural was transferred to the Oregon Historical Society.
A new pulpit was built by Jacob Schott who was a skilled carpenter, learning the craft in his home village of Franzosen, Russia. Jacob also played the clarinet at prayer meetings and special worship services.

Elias Hergert served as pastor from 1925 to 1939 when he was called to minister to a congregation in Lingle, Wyoming. He returned to Portland in 1943 on the advice of his physician to improve his health. Unfortunately his health did not return and he died on March 31, 1944.

St. Pauls Church was commonly known in the Volga German community as "Hergert's Church," after the two Hergert brothers who founded and led this church for so many years. 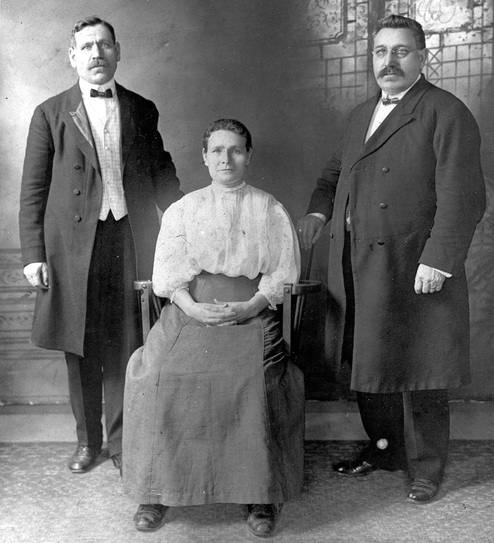 Under the leadership of Reverend H. Bock, the Easter week of 1955 was chosen to commemorate the 50th Anniversary of the church. Reverend J. J. Braun was leading the congregation by Easter Sunday 1956.

Herbert L. Hergert recalls that the church was referred to as "Lutheran" by some and "Congregational" by others. The confusion about being a Lutheran church is the result of several factors. First, the ethos of the Evangelical Synod was was largely pietistic Lutheran. Second, the German word Evangelische (Evangelical) became a synonym for the word Lutheran. Lastly, the attempt in 1949 to become part of a Lutheran Synod also contributed to the common belief that it was in fact a Lutheran church. The church had always had a close relationship with the Volga German Congregational churches in Portland and Rev. Jacob Hergert had in fact served Congregational churches and participated in its conferences.

Although the church was a member of the Evangelical and Reformed Church it chose to remain independent when this denomination merged with the United Church of Christ (UCC) in 1957. The religious practices and beliefs of Volga Germans had been shaped by their isolation in Russia and the strong Pietistic movement that flourished in the late 1800s. Many congregations, including those in Portland, saw the UCC as too liberal and incompatible with their beliefs.

Jacob Erdman served as Church Board Chairman for over 25 years. Shortly before his death in November 1964, Jacob asked Edward C. Brill, to promise to serve the remainder of his term of office and see to it that the church operate properly in hopes that it might prevail. Subsequent to Jacob Erdman's death, Edward Brill was elected by the church membership and served as Chairman of the Church Board until 1972. Church Board members at that time were: Mr. C. Kurtti; Mr. G. Schmunk; Mr. J. Maier; Mr. J. Geis.

Despite a declining membership, both Jacob Erdman and Edward Brill, kept the church operating faithfully until both were deceased.

Rev. Theodore Strobel was the last pastor of the congregation and served St. Pauls up to May 1, 1973, when he asked to resign due to ill health. Rev. Strobel was familiar with the Volga German congregations in Portland, having led the German Evangelical Congregational Brethren Church and Zion German Congregational Church in prior years.

Under the leadership of Rev. Strobel, the Easter season of 1973 was chosen for selling and closing the church, 69 years after its founding. The decision to sell the church building was based on a decline in membership to 21 people.

Mr. G. Schmunk, Church Board Chairman for approximately one year, and church board members; Mr. C. Kurtti, Mr. A. Miller and Mr. S. Miller were responsible for selling the church.

The church was sold to the Gethsemane Church of God in Christ. The predominantly African American congregation was led by Rev. R. L. Menefee and later by his son, Winfred Leon Menefee who died in March 2012. The Gethsemane Church of God in Christ listed the church property for sale in 2013, making it a focus of controversy over the gentrification of the neighborhood.
The property was sold to a housing developer Peter Kusyk and the church building was demolished beginning on April 23, 2015. Mr. Kusyk generously donated the Colista Dowling mural to Concordia University. After professional restoration, the mural was displayed in the George R. White Library until the university closed in 2020. It is now held by the Oregon Historical Society. The church bell was donated to the Hergert family and will serve the Canby Grove Christian Center.

Brill, Lillian (née Hergert). "St. Paul's Evangelical Lutheran Church in Portland, Oregon." The Brunnental Village Newsletter, May 1997, pg. 14-15. Written in 1973 at the closing of the church. Mrs. Brill was the granddaughter of Rev. Jacob Hergert.

Obituary for Rev. Jacob Hergert published in Der Kirchenbote in 1924.

The City of Portland's PortlandMaps website shows some of the historic permits related to the addition to the church in 1938.