Johannes (John) Koch was born in Kolb, Russia on April 21, 1843. His parents were Michael Koch and Elisabetha Reiber.

In 1863, Johannes married Barbara Koch (born January 12, 1844) from the colony of Frank, Russia. They had seven children from their marriage.

Koch served as a schoolteacher in the German colonies along the Volga River, but it was said that he was "a consecrated God-fearing soul, full of faith and the spirit of the Lord was upon him." This strong faith would take his life in another direction.

Koch, along with Rev. Wilhelm Stärkel from Norka, and the evangelist Heinrich Peter Ehlers became the three principal leaders of the Brotherhood (also Brethren) movement amongst the Volga colonists. Rev. Stärkel organized the first Brethren conference which was held in Brunnental, Russia in 1871. At this conference, H.P. Ehlers and Johannes Koch were both elected as evangelists and Koch was also designated a colporteur. All three men worked as part of a committee to draft the first Brüder-Konstitution (Brotherhood Constitution). Ehlers, Koch and Rev. Stärkel were also ardent Millennialists and took an active role in the Zionist movement of their day, lecturing on its behalf and supporting it financially. George Eisenach characterizes the trio as "fanatic in their support of this doctrine." 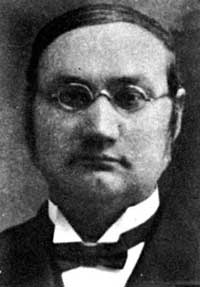 Rev. Johannes Koch
Johannes Koch arrived in the United States around 1882 and soon found many of his former Volga German countrymen in Eastern Washington where they had taken on work with the railroads. Koch founded what would become the First Congregational Church in Ritzville, Washington where he served from 1882-1891. 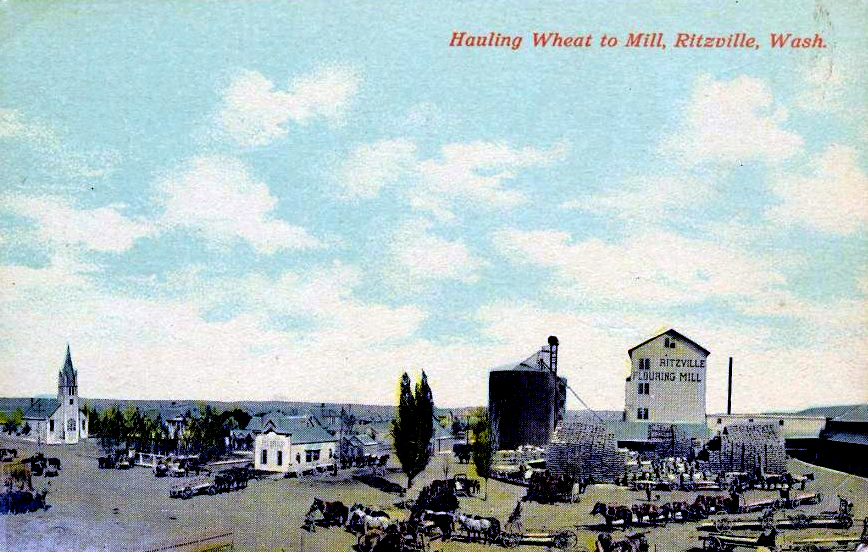 He also established what became the Evangelical Lutheran Congregational Church in Endicott, Washington and served as pastor from 1883-1893. Koch was ordained at the church in Endicott through an interpreter since he could not speak English. At that time there were only three English speaking ministers in Eastern Washington. 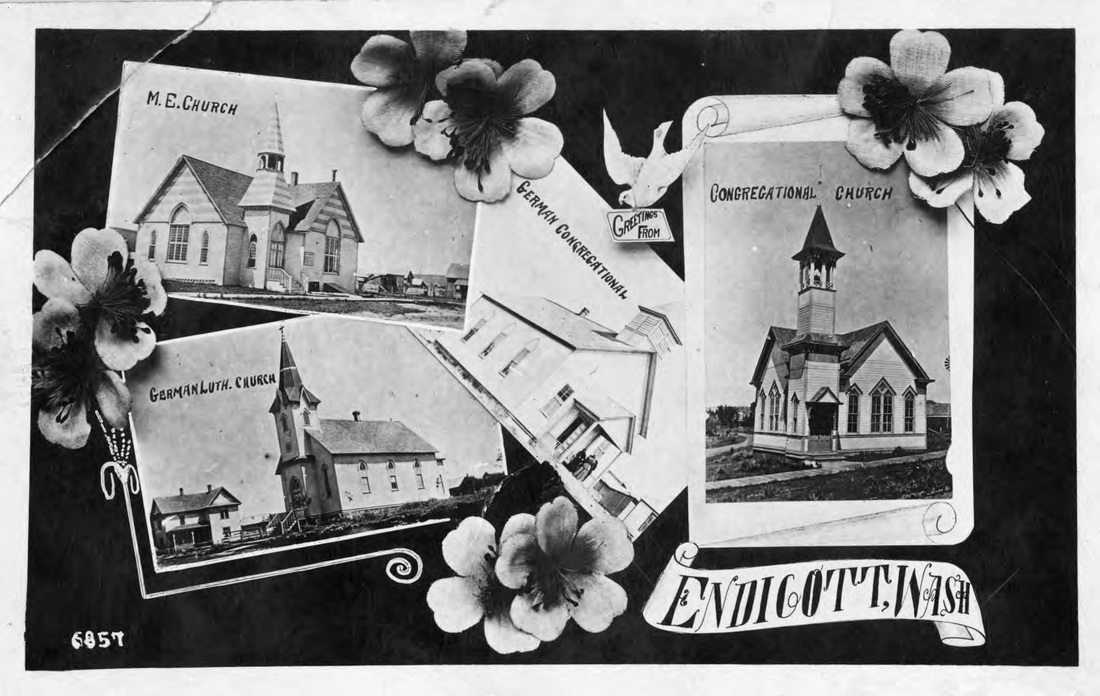 Rev. Koch also organized churches in Packard and Ralston, Washington (both near Ritzville) and for several years conducted services at all three churches.

Given that many of the people in Portland had known Koch as an evangelist in Russia, it is clear why he was called to establish the Ebenezer German Congregational Church in 1892, the mother church of the Volga Germans in Portland. 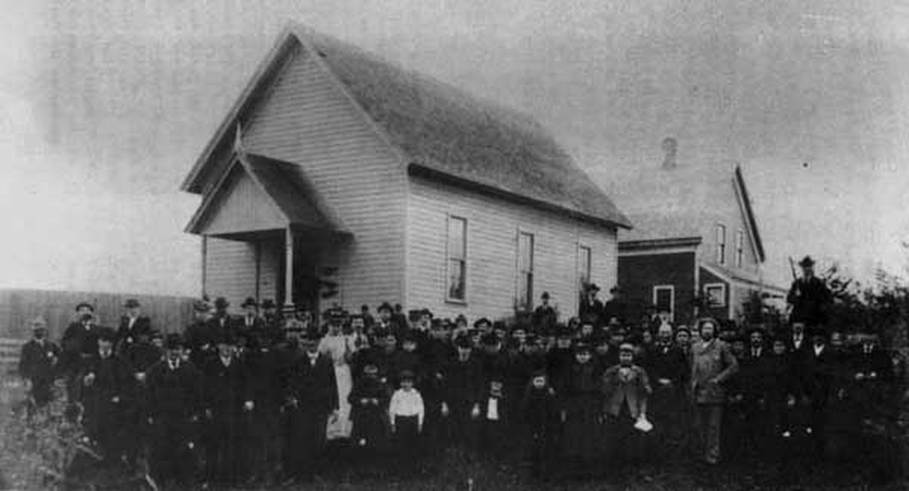 The Ebenezer German Congregational Church and congregation in 1895.
The following excerpt is taken from a letter, dated February 6, 1893, in which Rev. Koch depicts the religious life of his Volga German congregation in Portland:

"We have not had a single evening without a meeting since Christmas. Last week our Brethren felt that the evenings would no longer suffice. We therefore had meetings in the houses hither and thither, beginning at nine o’clock every morning and closing at nine o’clock at night. People who were considered to be beyond the reach of grace have been carried along by the power of the revival. Old perverse sinners, drunkards and hardened men, down to children of fifteen, have been reached and have humbly sought forgiving grace. Last Sunday we had reception of members. The church was packed full. Forty-eight converts gathered about the altar. All freely confessed Christ as their only Savior, after a very searching address. Then they were strongly exhorted to steadfastness in the Christian life and the Apostolic Confession of Faith was read to them, to which they all responded with a loud ‘yes.’  Then while the church sang the hymn:

‘To each other we give in covenant

I gave to each the right hand of fellowship. Then all went down on their knees, sometimes a half-hour at a time. Every man wanted to thank the Lord that he had sought him and found him and given him his hand of fellowship… Thus the work goes on. God be praised!"

After serving at Ebenezer, Pastor Koch again led the First Congregational Church in Ritzville (1893-1895) as well as the Zion Congregational Church in the same town (1893-1894). After serving the Zion church, Rev. Koch returned to the Ebenezer church in Portland and during the same time period he served the church in Stafford, Oregon (1895-1899) before going on to the Salem Church in Ralston, Washington (1899-1904).

Rev. Koch died in Ritzville, Washington on June 15, 1927 and he was buried in the Ritzville Cemetery along with his wife Barbara. 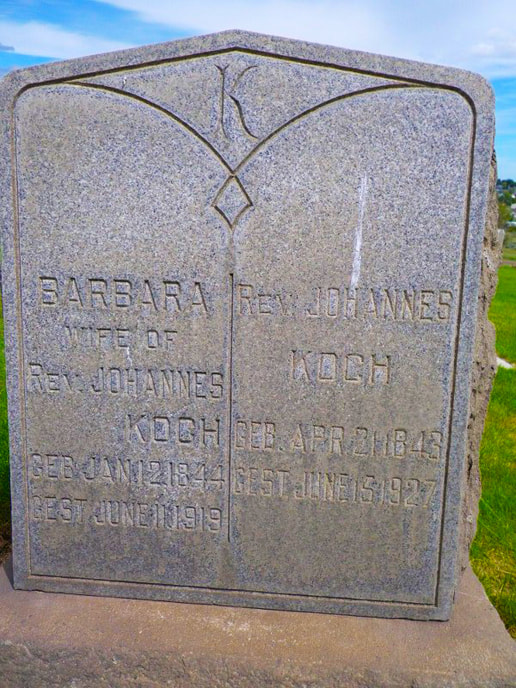 The grave of Rev. and Mrs. Johannes Koch in Ritzville, Washington. Source: Find-a-grave.com.