Conrad and Catharina Elisabeth (also known as Lizzie) became the parents of son, Johannes, in 1885. Conrad's father died the same year. In 1887, the Sinner's migrated to the United States and settled in Nebraska where two more sons, Georg Philipp (1888) and Peter Friedrich (1890) were born. Conrad's widowed mother came with them to the United States.

The Sinner family migrated to Portland by March of 1892 where daughter, Emma Mary, was born on the 3rd of the month. Two more children were born in Portland: Anna Elizabeth (1895) and Heinrich (Henry) in 1897.

Conrad and Catharina Elisabeth were founding members of the Ebenezer German Congregational Church in 1892.

In 1900, the U.S. Census shows the family living in the St. John's village north of Portland and Henry is farming.

Conrad petitioned to become a U.S. Citizen in 1911.

In 1910 and 1920, the Sinner's had relocated to Kalama, Washington and Conrad continued work operating his own farm along with Georg and Henry.

Catharina Elisabeth died on February 28, 1928 and was buried at the Rose City Cemetery in Portland.

Conrad died on July 28, 1935 and was buried with Catharina Elisabeth. 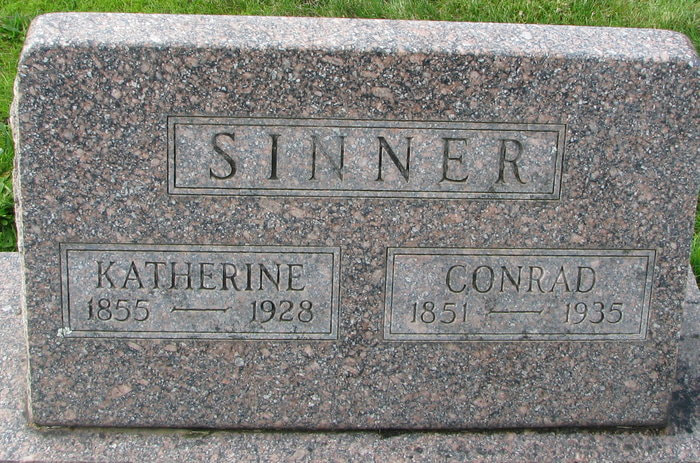