Historians have described the famine relief work accomplished along the Volga River during the years 1921-1923 as the most outstanding act of charity ever performed by the Volga Germans living in the United States.

The National Convention of the Volga Relief Society held in Portland, Oregon in 1924. This photograph was taken in Irving Park across the street from the Zion Congregational Church on NE 9th and Fremont. Courtesy of Marie Trupp Krieger.
The Volga Germans experienced periodic droughts and famines from the time of settlement in 1767 up to the Bolshevik Revolution. The most recent famine had occurred in 1891-1892. Heart wrenching letters written by family and friends in Russia arrived in Portland in 1891 reporting that horses were being killed for food and children were eating bark to get a little nourishment. Those who could, fled Russia bound for North America. At the time, little could be done in time to help these unfortunate people who were trapped half-way around the world. The next famine would be more severe, and this time, help from Portland and other Volga German settlements in the United States would save many lives.

The Russian Povolzhye (Volga region) famine of 1921 began early that year and its impact was felt in through 1924. It is estimated that this famine claimed the lives of 5 million people. The famine stemmed from both natural and human causes.

There was a poor crop in 1920 which was made worse by the disruption of agricultural production, which started during World War I and continued through the disturbances of the Russian Revolution of 1917 and Civil War. The Bolshevik policies of War Communism (keeping the Red Army stocked with weapons and with food) and prodrazvyorstka (a campaign to confiscate grain and agricultural products) had set the stage for a human tragedy.

Mass confiscation of stored grain began in the winter of 1920-21 triggering the beginning of famine in January 1921. In many cases recklessness of local administration, which recognized the problems only too late, contributed to the problem. Hunger was so severe that it was doubtful that seed-grain would be sown rather than eaten.

Without seed to plant, the famine worsened in the spring of 1921 and people sold all they had to survive. Drought struck a hard blow to the Volga region in the summer of 1921 resulting in a total crop failure. With death all around, Cholera and Spotted fever were rampant.
The American Relief Administration (ARA), which Herbert Hoover had formed to assist those who were starving as a result of of World War I and the Russian Civil War, had offered assistance to Vladimir Lenin in 1919. Lenin refused this offer as interference in Russian internal affairs.

The growing famine in 1921 and other political pressures convinced Lenin to reverse his policy. He decreed a New Economic Policy on March 15, 1921 which belatedly allowed relief organizations to bring aid.

George Repp (owner of a local grocery and meat market), along with his brother-in-law John W. Miller (a local businessman), took the initiative to organize the Volga Relief Society. Their first step, before talking with the Volga German community, was to contact the ARA in New York. The response from the ARA was positive and Repp and Miller soon began their outreach to the Portland community.

The Volga Relief Society was organized in Portland on August 11, 1921 in the Zion German Congregational Church. Their stated purpose was to raise funds for relatives along the Volga River, who at that time were suffering from one of the most disastrous famines in European history.  At this meeting John W. Miller was chosen President and George Repp was to be its General Secretary and Representative in Russia, working under the supervision of the ARA. David Hildermann was chosen as Vice-President and Gottfried Geist as Treasurer and Mrs. George Repp was chosen as Secretary. The Directorate included: Ludwig Deines, Henry Eilers, Henry Fink, Gottfried Geist, Rev. J.H. Hopp, Rev. H. Hagelganz, Rev. J. Hergert, David Hildermann, Judge Jacob Kanzler, Jacob Krieger, John H. Krieger, J. Conrad Lehl, J.A. Miller, John W. Miller, George Repp, Mrs. George Repp, Philipp Sittner, Peter Schnell, John Traut, Henry Weibert, Rev. Peter Yost, Rev. Geo. L. Zocher. The organization was based in the Lumbermen's Building (now on the National Register of Historic Places).

Emma Schwabenland Haynes wrote the following about this effort:

The enthusiastic response of the Portland people to the news that an organization had been perfected was far greater than anyone could have believed possible. Throughout the following days the newly elected leaders were constantly being stopped by Volga German men and women who expressed their happiness in the creation of the society. In view of the seriousness of the crisis that existed in Russia, all religious and personal differences were forgotten, and people of all denominations and from all colonies showed a spirit of harmony and cooperation that was to remain truly remarkable.  The future success of the Volga Relief Society can be explained to a great extent by the splendid loyalty of its members, which became an example for Volga Germans in many other communities of the States. 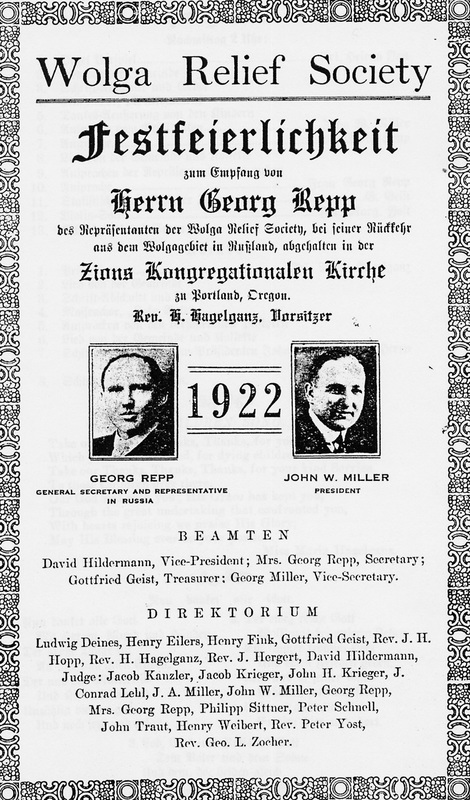 Program for the 1922 Volga Relief Society meeting in Portland at the Zion Congregational Church led by Rev. Heinrich Hagelganz. Courtesy of Marie Trupp Krieger.
In September 1921, John W. Miller wrote to contributors about the progress made since the organization of the Society. A list of subscribers was attached to this letter. A copy of the letter and list is presented below. A searchable list is presented here. 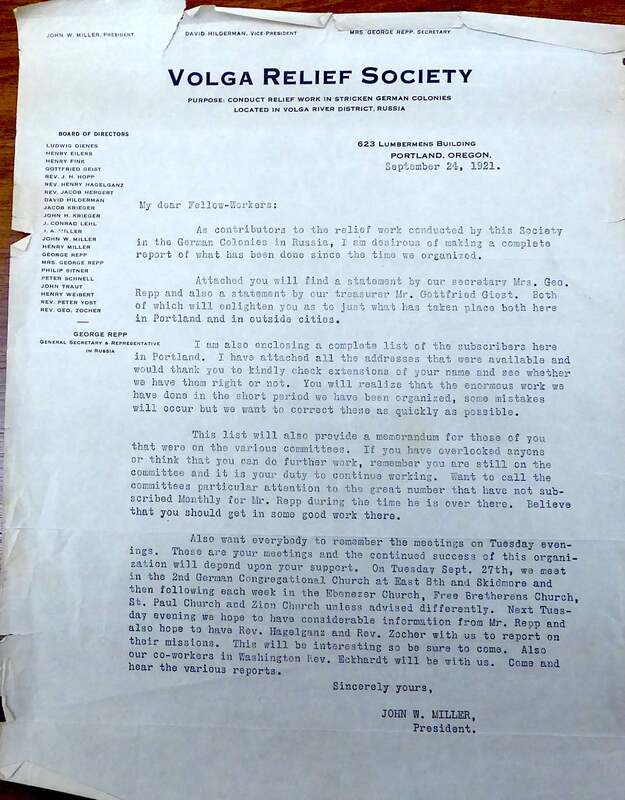 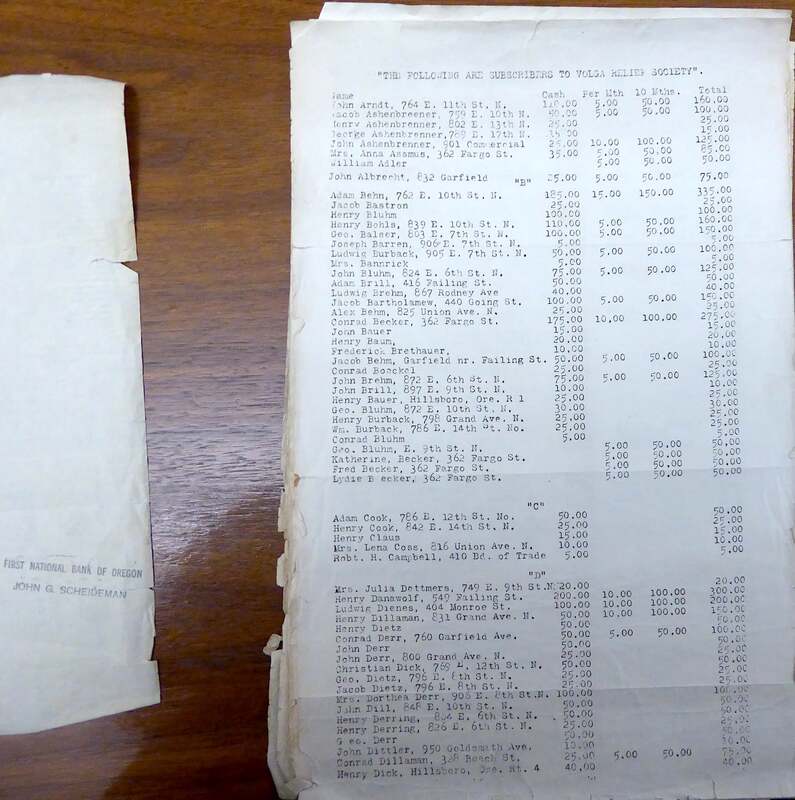 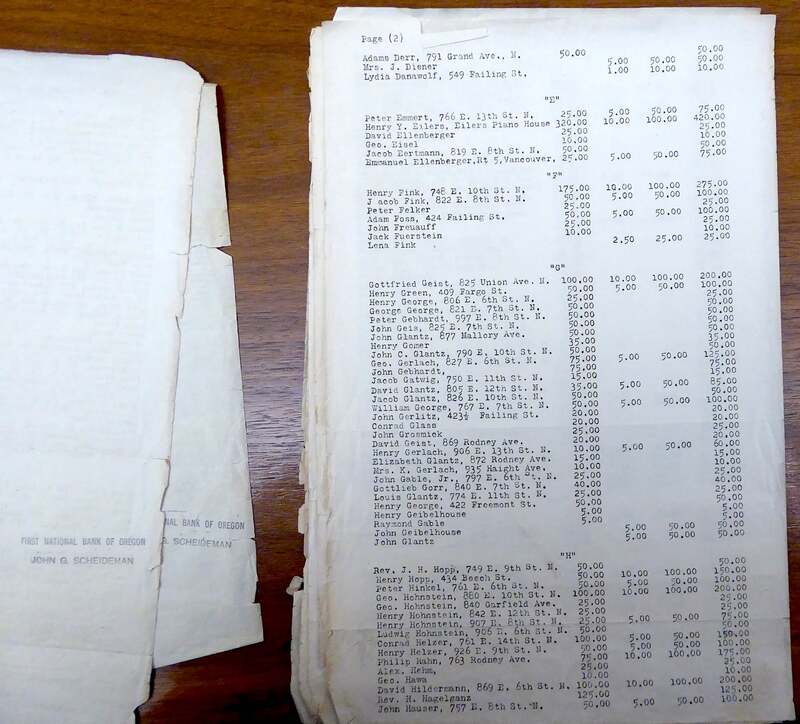 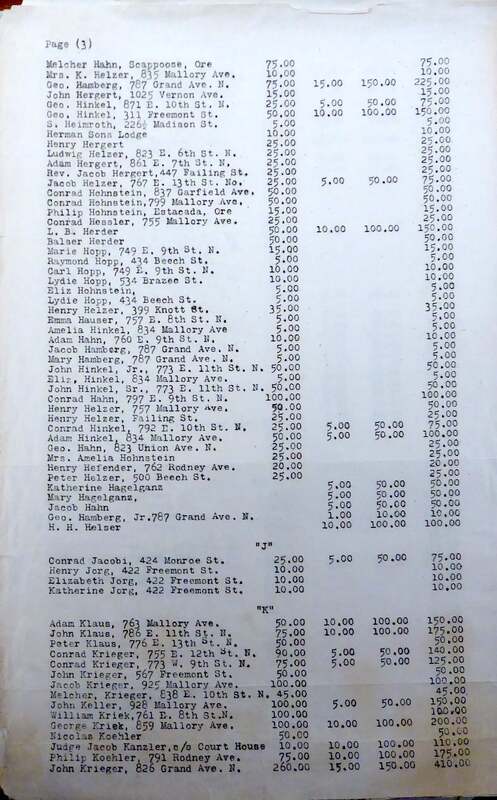 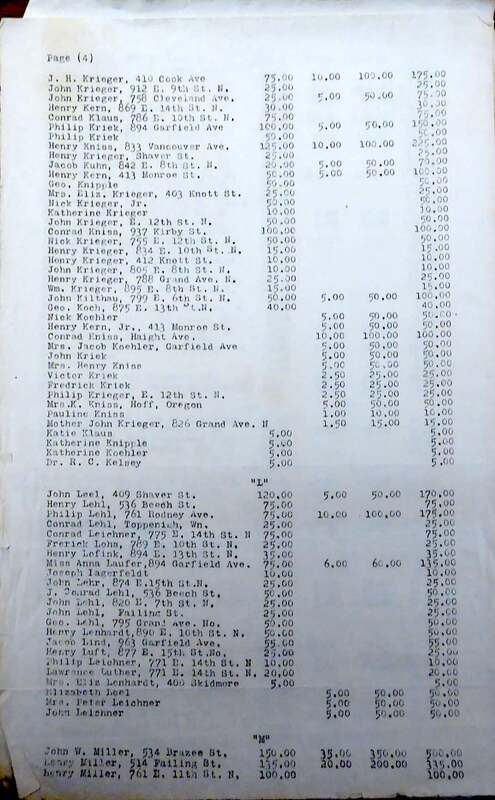 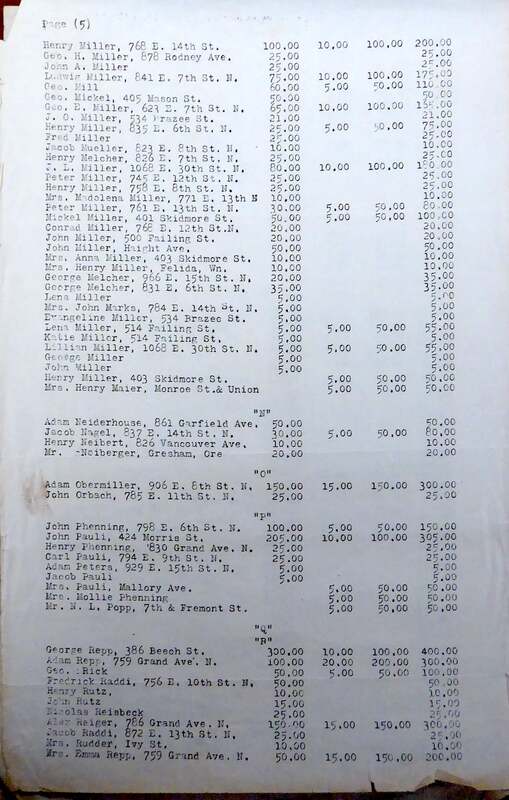 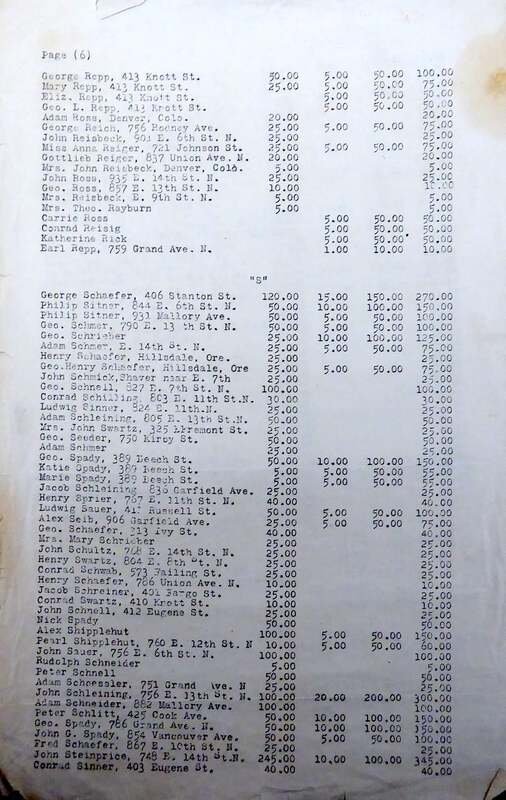 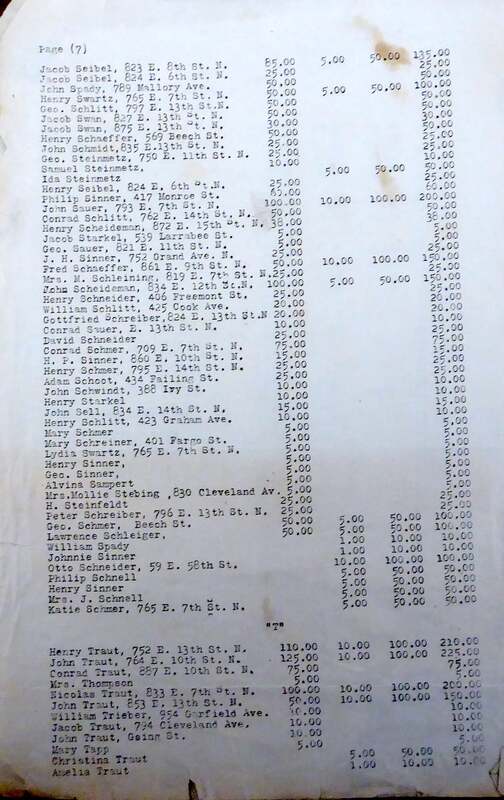 Contributions were commonly made in the form of a Russian Food Remittance that allowed food to be delivered by the ARA to a specific person in Russia. The example below is a food remittance purchased by Philip Lehl who was living at 761 Rodney Avenue in Portland. Mr. Lehl requested that food be delivered to Peter Albrecht, son of Conrad, in Norka. He made many similar purchases to help friends and family in Russia. 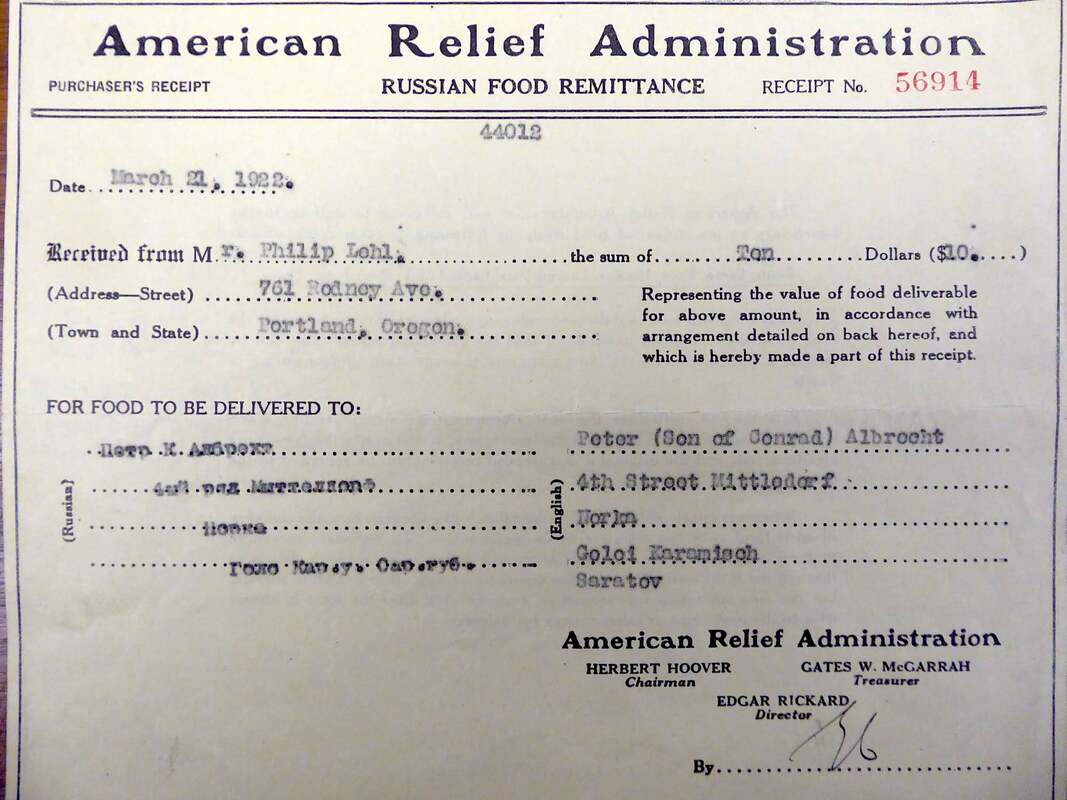 The ARA pledged to deliver an assortment of different foods to the specified people in Russia. Three-quarters of the contribution was used for this purpose. One-quarter of the donation was used for the mass Child Feeding program. 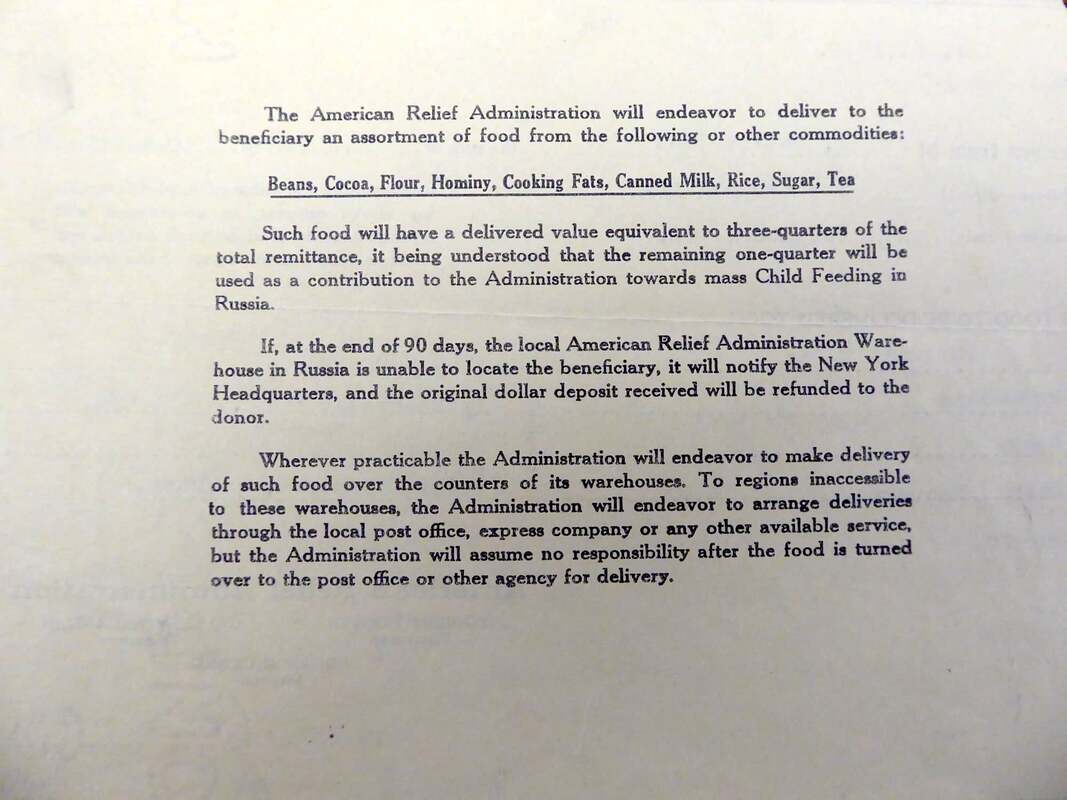 ARA notice about the intended delivery of food sources and the use of the contribution for the larger child feeding program. 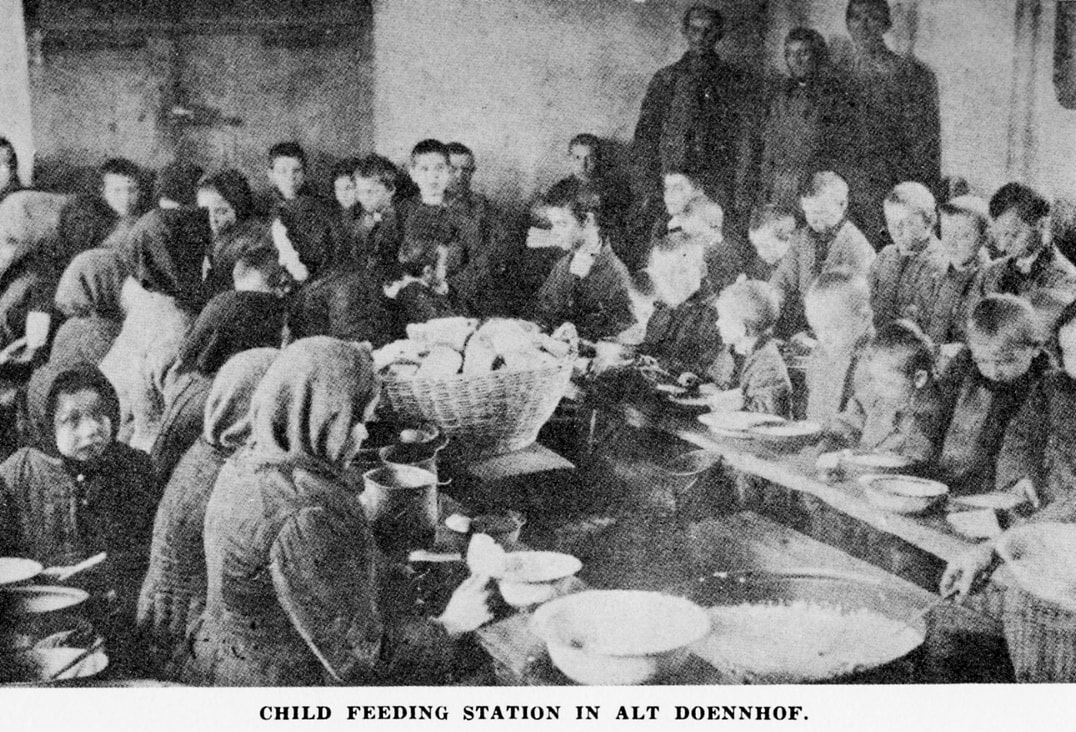 In 1922, the notable Volga German author, newspaper editor and advocate, Pastor Johannes Schleuning, visited Portland to lend his personal support and credibility to the Volga Relief Society. Pastor Schleuning emigrated from Russia to Germany in 1918 to escape the chaos of the revolution in Russia. During his time in Portland he resided with his brother, Alexander John Schleuning on NE 6th. Alexander John Schleuning is the father of Jon Schleuning and Alexander John Schleuning II.
The Volga Relief Society did immeasurable good in the German colonies by feeding 60,000 adults and 75,000 children, and by distributing medicine, shoes, and warm clothing. The secretaries of the various relief societies state that approximately one half million dollars was raised by Volga Germans living in the United States and sent to their friends and families either through general funds or by means of food drafts and clothing draft.

There is one man in Portland that Hoover asked particularly to see again. He is George Repp, proprietor of a butcher shop at No. 774 Union Avenue. 'Repp is of German extraction, but he is really a Russian, or was until he became an American,' Hoover said.  'He left his butcher shop when Russia was in such a bad state and made up a relief fund among his people in this county.  It was when the American Relief was extending help to those people of the Volga that Repp came to me in Washington.  As soon as I saw his face I sent him right over.  Why, those people over there worshipped him like a god.  And when his work was done, he came back to his butcher shop.'

Letterhead for the Volga Relief Society based in Portland.

Patenaude, Bertrand M. The Big Show in Bololand: The American Relief Expedition to Soviet Russia in the Famine of 1921. Stanford, CA: Stanford UP, 2002. Print.

A personal scrapbook of the George Repp family which includes newspaper clippings, letters, and memorabilia which formed the basis of the research done by Emma Schwabenland Haynes in her book "A History of the Volga Relief Society" is held by the American Historical Society of Germans from Russia in Lincoln, Nebraska. Included are letters from President Herbert Hoover and his cabinet members who helped expedite the work of the society. The collection was in the possession of the Adam Repp family, the brother of George. Jean Repp Piennett and her brother, Earl Repp, donated the valuable materials to AHSGR.