By the time the United States declared war on Japan and Germany in December 1941, the assimilation of the Volga Germans in Portland was well underway. The flow of newcomers from Russia had slowed to a trickle after World War I and the Russian Revolution and stopped completely after the famine in the 1920s. While they remained proud of their ancestry, many men and women from the Volga German community faithfully served their country in nearly all branches of the Armed Forces and all theaters of the war. Some young men, like Henry Schmidt (Smith) and Richard C. Miller, didn't come home.

Many in the Volga German community also worked in Henry Kaiser's ship building yard on Swan Island or in other industries supporting the war effort. Betty Niederhaus recalled working seven days a week to meet production goals. Buses arrived on Union Avenue (now MLK Blvd.) to pick up workers and transport them to the shipyard. People were proud of their work, and while they valued their German ancestry, they identified strongly as Americans.

Ironically, the German invasion of Russia in June of 1941, provided Soviet leader Joseph Stalin with the excuse he needed to deport all of the ethnic Germans living in Russia from their homelands to Siberia and Central Asia. The entire Volga German population was deported simply for being "German". Most of the deportees were placed in "special settlements" and Gulags. Families were often split. This terrible act would sever any remaining connections between family and friends living in Portland and Russia for the next 50 years. 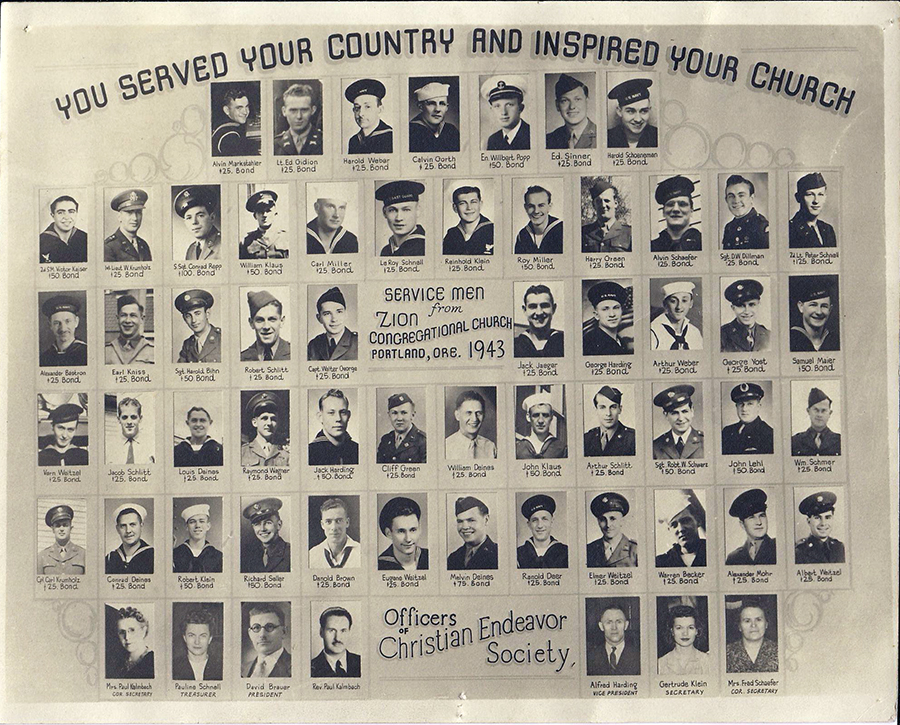 Members of the Zion Congregational Church serving in World War II in 1943. Photograph courtesy of Karen Drier Esayian.
After two world wars fought against Germany, followed by a Cold War with Russia, many of the first and second generations born in the United States outwardly distanced themselves from their German heritage and Russian past. They married outside of the ethnic group, moved away from the old Albina settlement, and assimilated into American society.

Haynes, Emma S. German-Russians on the Volga and in the United States. 1996. Print.