When the first Volga Germans began to arrive in the North America in 1875, most wanted to continue worshiping as they had in Russia.

Catholics found religious homes in established congregations or founded new congregations under the broader authority of the worldwide church.

Protestants faced a more difficult situation given that their Lutheran and Reformed churches in Russia had no direct affiliation with churches in North America. Unlike Russia, where there was only one church in each village, many denominations wooed the Volga Germans in the United States, confusing them with competing claims. This was especially true for those who settled in cities like Portland. Congregations with Volga German members could be found among the Missouri Synod, American Lutheran Church, Reformed Church in the United States (German Reformed Church), German Evangelical Synod of North America, German Methodists, German Baptists, Mennonite, and Seventh-day Adventists.
In Oregon, the St. Peter's Lutheran Church in Cornelius is the first known church established in the greater Portland area with Volga German members. This group arrived in Portland from Kansas in 1881. Some members of this party settled on farmland near Cornelius which is located approximately 25 miles west of Portland. These Volga German families became founding members of the St. Peter's Lutheran Church (which was dedicated in 1882) along with Germans who had emigrated directly from Germany. This church was part of the Missouri Synod.
Other early Volga German pioneers settled on farmland west of Portland. Some of these families joined with German and Swiss settlers who attended the German Congregational Church of Cedar Mill (organized in 1887) and the German Methodist Episcopal Church (incorporated on March 25, 1895), both located in Bethany community.
The majority of the early Volga German pioneers in Portland were Protestants. The first Protestant Volga German church in Albina was established by Friedrich Jörg, a native of Norka, Russia. Friedrich was among the earliest Volga German settlers in the United States and he became a member of the Adventist church while living in Nebraska. Jörg later became an ordained minister and founded the Albina Seventh-day Adventist Church shortly after his arrival in 1889.  The membership of this church included several other Volga German pioneering families in Portland who had also joined the Adventist church in Nebraska.

Many of the early Protestant pioneers living in Albina found it difficult to attend the German Reformed Church located in downtown Portland due to the distance (there were no automobiles and bridges at this time) and they did not feel welcomed by the nearby German Methodist Episcopal congregation on NE Stanton and Rodney or the German Evangelical Reformed Church on Ninth and Stark. When the Volga Germans arrived at church on Sunday in their Russian styled boots and sheepskin coats for the men and three cornered shawls and long dark skirts for the women, the people from who had arrived directly from Germany were less than cordial. As a result, people began to meet in private homes for prayer meetings and Bible study. In the beginning, the Sunday school met in the home of John O. Miller. Later, John Krieger Sr. built a summer kitchen next to his house and all the meetings were held there. In 1891, this group felt the need to have a pastor, as more people were coming from Russia almost every month. 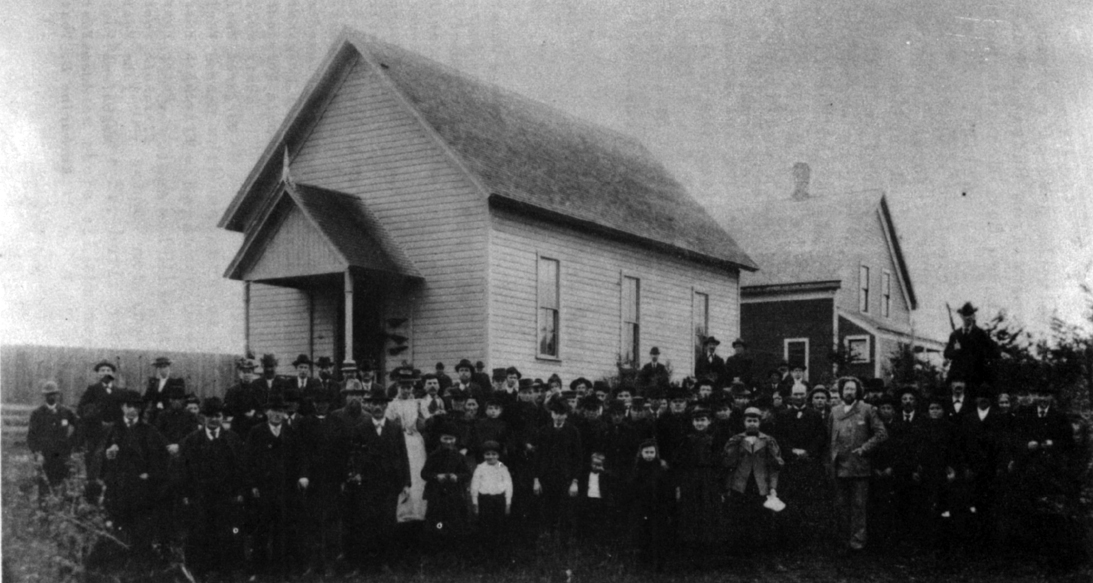 More Volga Germans continued to migrate to Portland from other parts of the United States, Canada and directly from Russia. As the congregation grew, a decision was made in 1904 to build a new church on the existing site. Rev. Johannes Hopp, who served the Ebenezer congregation from 1903 to 1914, led this effort. The new building was dedicated in December 1904.

Rev. Hopp was born in the Volga German colony of Frank, Russia and immigrated to the United States in 1888. After graduating from the Chicago Theological Seminary Rev. Koch was appointed minister of a small congregation at Park Ridge, Illinois. In 1903, he came to Portland to serve the congregation of 70 members at the Ebenezer Church.

As the Volga German community in Portland continued to grow between 1881 and 1914, four Congregational churches were established. The history of these churches is closely intertwined.
Two other churches founded by Volga Germans were not part of the Congregational conference of churches.

The First United Mennonite Baptist Church was founded in 1891 by Heinrich Hölzer (later Helser). Heinrich Helser was born January 17, 1844 in Norka, Russia. Helser served as a Mennonite minister in Russia and left Russia in 1878 bound for America. Helser first settled in Hastings, Nebraska where he and his family lived in a Mennonite commune. The family later moved west and arrived in Portland in November 1891. Helser soon established a small congregation which grew to 38 members by 1895. The First United Mennonite Baptist congregation struggled to survive, but continued until 1938. The former sanctuary still stands today near NE 6th and Fremont and is now a private residence.
The four Congregational churches maintained close ties over the years and often had joint worship services. Together they, along with the St. Pauls Evangelical and Reformed Church, formed the core of the Volga German religious community in Portland. During the severe famine in the Volga region during the early 1920's, the pastors of these churches worked together to support the Volga Relief Society. These churches also maintained ties with family and friends who had chosen to settle in Endicott, Ritzville, Walla Walla and other towns in the Palouse country of Washington State. Pastors often moved between the Portland and Washington churches over time. 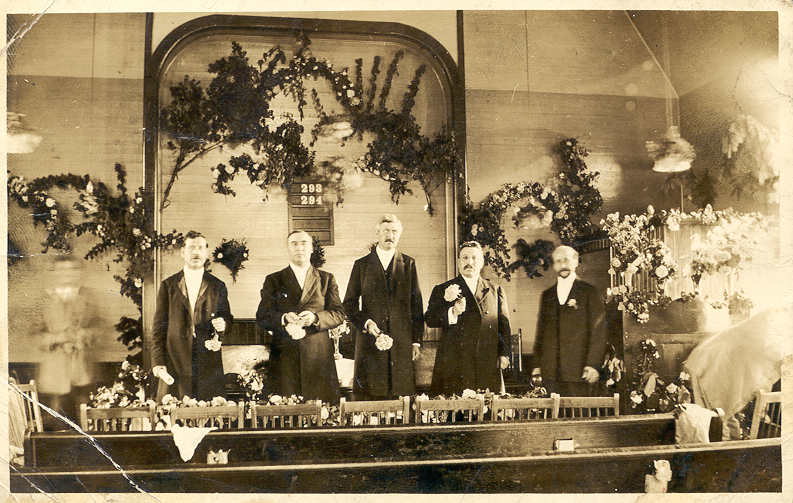 The churches served as a bridge from the Old World to the New World. They were German islands in an American sea that allowed the early immigrants a safe harbor to associate with their countrymen and continue practicing their beliefs as they had in Russia. The churches also served a key role in maintaining social traditions and in preserving the German language. As time passed, the younger generations began to assimilate and move out of the Albina enclave. The second and third generations born in the United States no longer needed or wanted a refuge from the outside world. Without a new source of members, most of the Volga German churches faded into history.

An excerpt from an article written by Rev. Edward Grauman in the 1953 Kirchenbote Kalendar expresses the concerns of the clergy during the time of decline in the German Congregational churches:

In my traveling to and from the different churches and conversations with ministers and laymen, I have often heard the ill-drawn conclusion: "Our churches are dying a slow death." This is an expression used to denote that our work is slowly losing itself in the current of other denominations, and our people are seeking to give expression of their religious convictions outside their mother church. It is regrettably true that in the current of population shift our people too, many of them, changed residence as well as denominational fellowship. Such changes I find are so often due to lack of loyalty, steadfastness and faithfulness. Let's be honest, and in our honesty we must conclude that our fellowship is as basic, sound and dynamic as any other denomination. Our fellowship is as a finger pointing us to Christ in whom our hope rests, and no other denomination can do more. "We preach Christ crucified."

It is also true that in so many instances we are losing our grip upon our youth of today because of more than one reason. Our young people no longer feel the ties of common nationality as keenly as did the former generation and which played so significant a role in uniting our work and forming it into a distinct organization. They are losing the sense of racial consciousness and are seeking to widen the boundaries of their experiences and enriching their lives through wider comradeship than those afforded them by their present mother church. Knowing and seeing these things come to pass, our churches ought to arouse themselves and leave no stone unturned in order to keep them within the fold. The language question has harmed us more in driving our youth from us than has any other single item of the day, and unless we prepare ourselves to meet this challenge the future of our churches is not too promising. A church is no language institution but rather an institution to enlist boys and girls, men and women, for the Kingdom of God.

Haynes, Emma S. German-Russians on the Volga and in the United States. Place of Publication Not Identified: Publisher Not Identified, 1996. Print.

Rath, George. Emigration from Germany through Poland and Russia to the U.S.A. Salt Lake City, UT: Genealogical Society of the Church of Jesus Christ of Latter-day Saints, 1969. Print.​

Scheuerman, Richard D., and Clifford E. Trafzer. The Volga Germans: Pioneers of the Northwest. Moscow, ID: U of Idaho, 1980. Print.