Jacob Elias Hergert was born August 15, 1859 in Brunnental, Russia, the son of Elias Hergert (born 1835) and Maria Catharina Dietz (born 1837) both born in the colony of Walter. Elias and Maria Catharina had at least nine children, most of whom immigrated to the United States and settled in Northeast Portland. Among Jacob's siblings in Portland was his brother, Elias, who would also become a pastor. Another brother, Heinrich Elias also settled in Portland.
Jacob Elias was confirmed in Eckheim in 1872.

On December 27, 1877, Jacob married Christina Elizabeth Lohrei in Brunnental, where he served as the assistant schoolmaster. Christina Elisabeth was born on February 14, 1857 in Kutter.

Jacob and Christina Elisabeth immigrated to the United States in 1893 when he was called by Rev. Johannes Block to serve the German speaking residents of Endicott, Washington. Rev. Block was also a German-Russian immigrant who completed his seminary studies in Chicago and later founded the German St. John Lutheran Church in Jefferson Park, a Volga German enclave located in northwest Chicago.

Rev. Block wrote the following about his call to service of both Jacob and Johannes Idt which was published in the February 22, 1940 edition of Die Welt Post (The World Post):

At their request, I sent them both passage money to come to America in order that they might prepare themselves as pastors to be able entirely to be in the service of the Lord. Pastor J. Hergert came, but Johannes Idt left me high and dry as he accepted a position with the Russian government in Saratov.

After his arrival in the United States, Jacob became a member of the Deutsche Evangelische Synode von Nord-Amerika (German Evangelical Synod of North America) which served German Protestant congregations of mixed Lutheran and Reformed heritage. These congregations were deeply influenced by pietism.

Rev. Hergert was affiliated with the Eden Theological Seminary (which organized the German Evangelical Synod), however, their records do not show that he attended the school. It is likely that Rev. Hergert received his religious training in Russia. 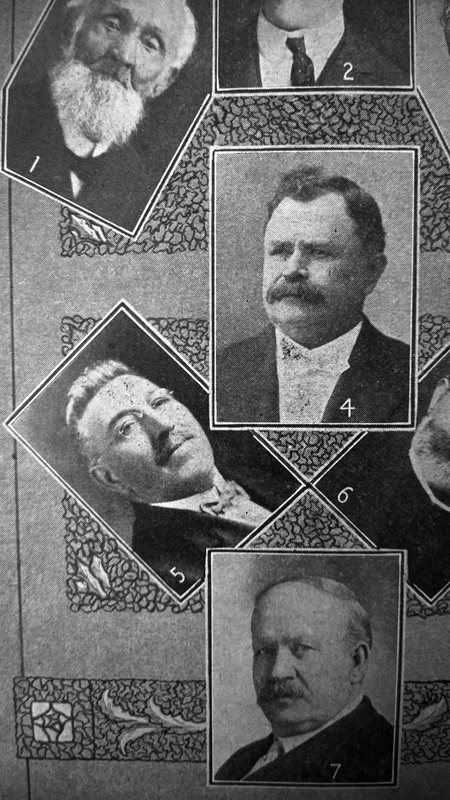 Rev. Jacob Hergert (number 5) shown in a publication of the Eden Theological Seminary. Source: Used with permission of the Eden Theological Seminary Archives (July 2015).
Most members of his newly founded German Jehovah Church in Endicott were originally from the Volga German colony of Yagodnaya Polyana. Jacob oversaw the building of a new church with the cornerstone laid on June 3, 1894. By 1895, the congregation had doubled to 41 members.

From 1894 to 1897, Jacob served the church in Endicott and the St. John's Church in Alkali Flat (near La Crosse) which he founded. During this time Jacob also founded the German Congregational Church in Colfax.

In a booklet printed for the 80th Anniversary of the Evangelical Congregational Church at Endicott, Washington (May 19, 1963), credit was given to Rev. Hergert for the meticulous records he kept for the church during his pastorate. It is recorded that the annual salary was $280.00 of which Endicott paid $150.00 and Akali Flat $80.00 and Colfax $50.00.
From 1896 to early 1904, Jacob served the Zion German Congregational Church in Walla Walla, Washington. Jacob became a naturalized citizen on June 19, 1899. During his time in Walla Walla, Jacob was active in writing to his friends and family in Brunnental to encourage them to immigrate to the United States.

One of the most sacrificial duties of a pastor was that he had to serve more than one church at a time, often as many as three or four. During Jacob's ministry in Walla Walla, he also served Immanuel German Congregational Church in Packard from 1899 to 1902. The Immanuel church was located 14 miles north of Ritzville - a considerable journey in those days.

In 1904, Jacob moved to Portland where he organized the St. Paul's Evangelical and Reformed Church.

Jacob and Christina Elisabeth's children lived near them in NE Portland. Alex lived on NE 8th and Fremont, Solomon lived at NE 12th and Mason and John lived at NE 24th and Skidmore. Jacob also had four brothers and one sister living in Portland. Jacob's brother Henry owned the Fountain Saloon located at Union and Russell. 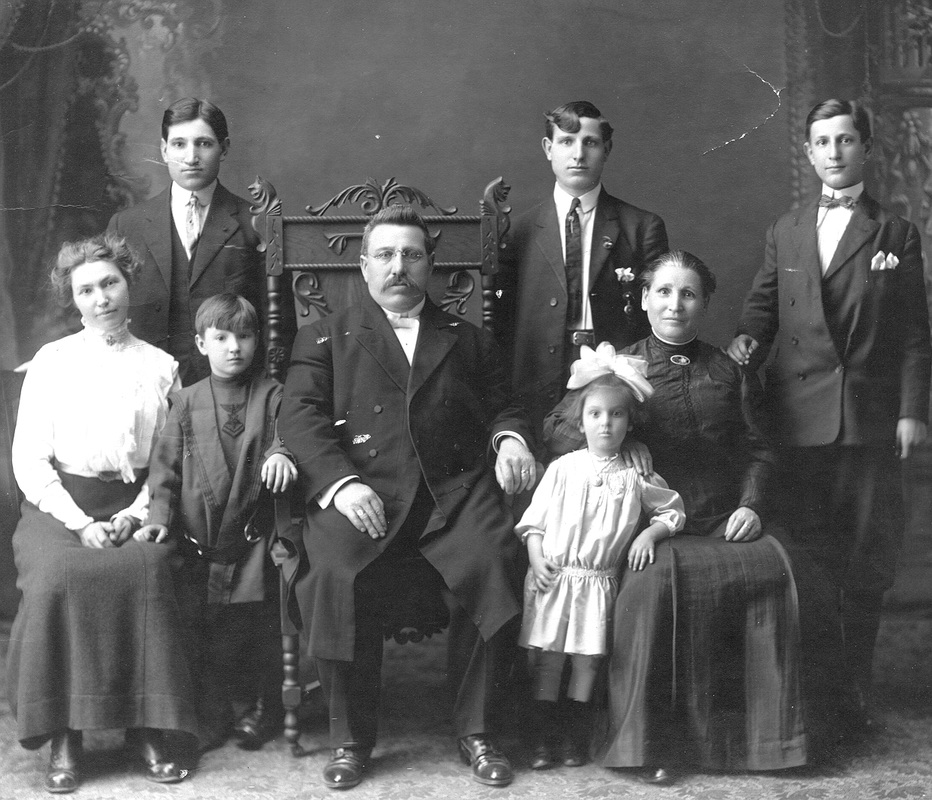 Rev. and Mrs. Jacob Hergert family. Photograph courtesy of Herbert L. Hergert.
Jacob was bilingual and felt comfortable in both the English and German speaking worlds. Christina Elizabeth never learned to read or speak English which made communication with her grandchildren difficult.

Under Jacob's leadership, the congregation of St. Paul's flourished for 17 years until his health faltered in 1921.

After two years of illness, Rev. Jacob Hergert died at his home at 447 Failing Street in Portland on December 1, 1923.

At his funeral service on December 5th, a large number of pastors and church members of various designations attended. A wall of flowers stood on the altar of the church and in spite of pouring rain, a mourning crowd who packed the church and bore witness of his popularity.

Rev. Hergert was buried at Rose City Cemetery. At his death, he left his wife Christina Elisabeth, sons Alexander, Solomon and John Edward and siblings Mrs. Anna Nagel, John, Adam, Henry, George (living in Russia) and Elias who was called by the St. Paul's membership to lead the congregation forward.

Jacob's wife, Christina Elisabeth, lived alone at the house on NE Failing up to the time of her death on May 27, 1947. 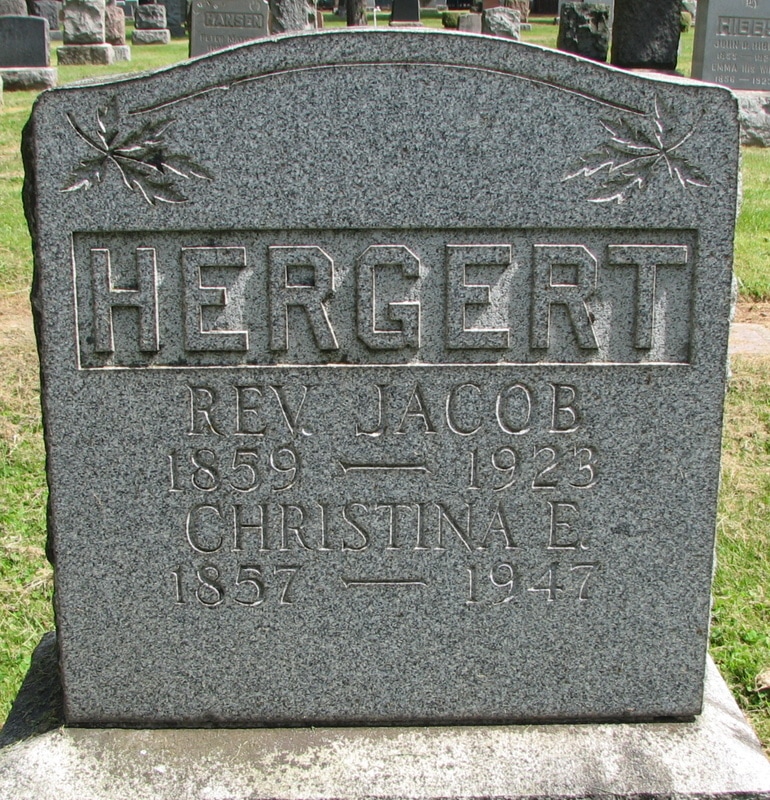 Brill (née Hergert), Lillian. "What I Remember About My Grandfather, Jacob Hergert."