Konrad (Conrad) first married Katharina Magdalena Huck (born 1838) in Norka on January 29, 1857. After giving birth to six children, Katharina Magdalena died on April 17, 1868. One of those children, Johannes (born December 9, 1860), would immigrate to the United States and also settled in Portland.

The Schnell's immigrated to the United States with several other families from Norka departing from Hamburg, Germany on July 4, 1877 aboard the steamship Suevia.

In 1880, the family is farming in Clay County, Nebraska along with Conrad's brother, Johannes (John) who was born on August 8, 1853 in Norka.

By 1888, the Conrad Schnell family were living together in Albina on the north side of San Rafael two lots east of Rodney Avenue. Both Conrad and his son John were working as laborers.

In 1891, Conrad and Emma are living on the south-side of Russell, two lots east of Margaretta Avenue (now MLK. Blvd.). Sons Peter and Henry are living at the same address. All three of the adult men are working as laborers.

One of Conrad's sons, Peter, married Anna Maria (Emma) Miller, the daughter of John and Anna Elisabeth Miller on February 19, 1891. The ceremony was performed by Rev. Hartung of the nearby German Methodist Church since no Volga German churches had yet been established in Albina. The Schnell's hosted the Miller family when they first arrived in Portland. Peter and Emma started a grocery store at the corner of Union Avenue and Fremont Street and lived in back of the store. Emma's family also lived at the store until their home was completed in May 1891. Later, John O. Miller and his son-in-law Peter ran the store. The profits were too small for two families and Peter bought another store across the street which he kept for three years.

Emma died on November 30, 1906. Konrad died on September 15, 1909. Both are buried at the Historic Columbian Cemetery in Portland. 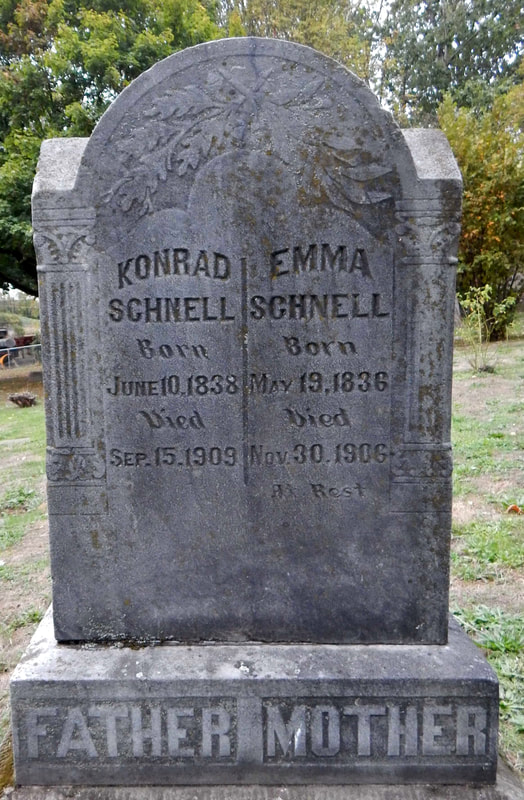