Jacob Kanzler was born in Franklin County, Nebraska, October 23, 1879, and is a son of Henry Michael and Mary Elizabeth (née Koch) Kanzler, who had emigrated from the Volga German colony of Kolb in 1878 and arrived in the United States on the steamship Wieland. The Kanzlers became residents of Kearney, Nebraska, where the father has been successfully engaged in the retail lumber business for over forty-five years. 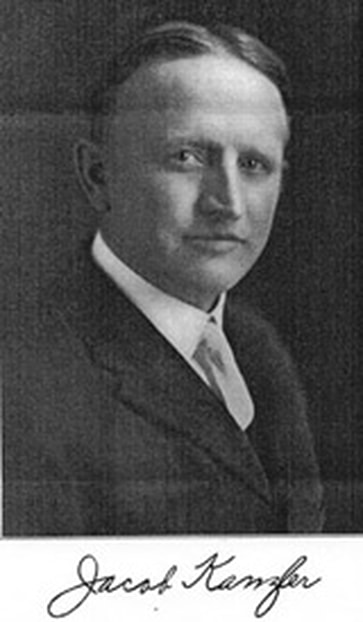 Jacob attended the grammar and high schools in Kearney and in the year 1900 entered the University of Nebraska, where he took a general academic courses. 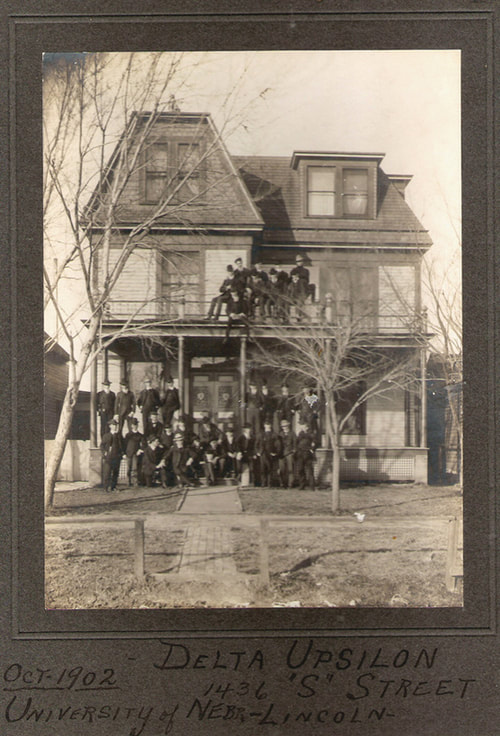 Jacob Kanzler (front row, second from the right) at the Delta Upsilon Fraternity at the University of Nebraska in October 1902. Photograph courtesy of Jim Buskirk, grandson of Jacob Kanzler.
In 1905 Kanzler entered Columbia University, New York city, where he studied law. Upon the completion of his law course (in 1909) he came to Portland, and in June, 1909, was admitted to the bar of Oregon.  He thereupon engaged in the practice of his profession and gained recognition as a dependable attorney and has since held many offices of public trust and confidence.

He subsequently revisited Kearney, Nebraska, and was married to Miss Grace Julia Hamer of that city, daughter of Justice and Mrs. Francis G. Hamer (Mr. Hamer being a member of the supreme court of Nebraska), returning to Portland with his bride, where he has since resided. Two daughters have been born to the Kanzlers: Jane Hamer, a graduate of Washington high school, and Frances Hamer, who is attending the same school. Jane was selected as the most "Perfect Baby" at the Oregon State Fair in 1913 and she was awarded prizes by Governor Oswald West. 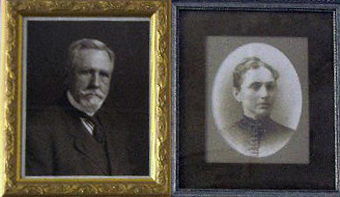 Francis Gregg Hamer and Rebecca Almira McCord Hamer - parents of Jacob Kanzler's wife, Grace Julia Hamer. Photographs courtesy of Jim Buskirk, grandson of Jacob and Grace Hamer Kanzler.
Jacob Kanzler is a republican; a member of the Oregon and Multnomah Bar Associations; Willamette Lodge, No. 2, A. F. & A. M.; Oregon Consistory, No. 1, Ancient and Accepted Scottish Rite; Al Kader Temple of the Mystic Shrine; I. 0. 0. F.; Knights of Pythias and Loyal Order of Moose. He is active in the American Legion, and is a prominent member of the Veterans of Foreign Wars. 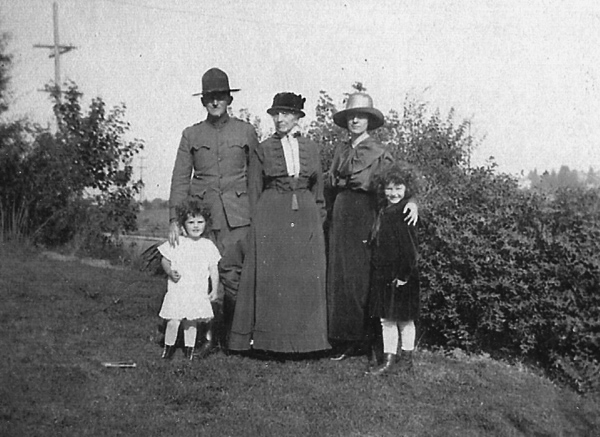 1916, going off to the trenches of World War One. Left to right: Frances, Jacob, Rebecca Elmira McCord Hamer, Grace, and Jane Kanzler. Photograph courtesy of Jim Buskirk.
Shortly after the outbreak of the World war he felt the need of and became active in assisting to mould public opinion in behalf of military preparedness in this country, and, in the fall of 1916 he became secretary for Oregon of the National Military Training Camps Association, which was later instrumental in bringing about the establishment of the Reserve Officers' Training Camps. He attended the first of such camps, organized at the Presidio of San Francisco, and, in August, 1917, was commissioned a captain of infantry. He was assigned to the 361st Infantry Regiment (91st Division) at Camp Lewis, Washington, and went overseas with his regiment, where he saw service in France and Belgium, participating in the St. Mihiel drive, the Meuse-Argonne offensive, and the Lys-Scheldt drive. At the close of the war he returned to Portland and was honorably discharged. In July, 1919, he was commissioned a major of infantry in the Officers Reserve Corps of the United States Army, and on December 1, 1923, was commissioned a lieutenant colonel. He was one of the founders of the Reserve Officers' Association of Oregon and was for two years its president.
In 1919, shortly after his return from overseas, Governor Ben W. Olcott appointed Jacob Kanzler as the first judge of the newly created court of domestic relations of Multnomah county. He organized this court along such lines as would best serve the needs of juvenile and parental offenders and established the court's practice and procedure.

In 1922 Judge Kanzler became on the Directors for the Volga Relief Society.

After presiding over this court for seven years, having during this time been elected to the office by the vote of the people, he resigned to become a vice president of the Northwestern National Bank, serving in that capacity until the bank retired from business in 1927.

He was later selected by Governor Isaac M. Patterson for the appointment of circuit judge of department Number 1, fourth judicial district at Portland, to succeed Judge George Rossman, who had been appointed a justice of the supreme court of Oregon. In 1928 Judge Kanzler's name appeared on the ballot as a candidate for the office to which he had been appointed and was nominated at the primaries to succeed himself for a period of six years.
Jacob Kanzler has been deeply interested in public and civic work throughout his many years residence in Portland. In 1914 he became president of the Progressive Business Men's Club, taking an active part in the establishment of Portland's present public market, and for which he was given much credit. He served for six years as a director of the Waverly Baby Home and in 1915 was a director of the Portland Rose Festival. During that same year he served on the committee which built the trail from Multnomah Falls to the summit of Larch Mountain. Through this latter work he became interested in the recreational possibilities of the Columbia river gorge and initiated and executed the movement through which the federal government created Columbia Gorge Park as a public recreation grounds, consisting of fourteen thousand acres of land, extending for some twenty-three miles along the Columbia River highway and of which Eagle creek is the approximate center. Continuing his contact with governmental agencies and acquaintances he was influential in obtaining an appropriation from the United States forest service for a survey of the Mt. Hood Loop road. He also drafted the application for federal aid for this highway, it being the first application of its kind to reach Washington from any part of the United States under the Federal Aid Road Act. 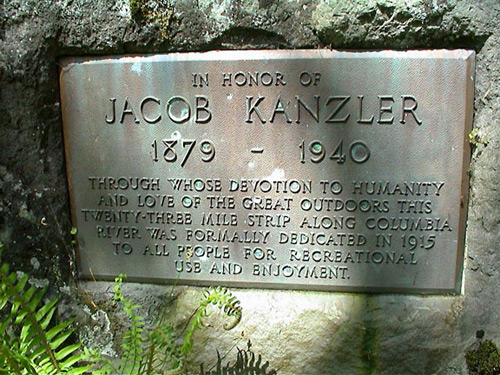 Jacob Kanzler Monument on the Eagle Creek Trail in the Columbia River Gorge. Courtesy of Steve Schreiber.
Jacob Kanzler took an active part in organizing the Portland Opera Association and the Portland Junior Symphony Orchestra Association. For many years he has been a member of the executive boards of both organizations. He is president of the Portland Fest Chor.

He was the director of the Portland Americanization Council; treasurer of the Portland Social Turnverein; chairman of the child welfare committee of the American Legion for the department of Oregon and of a similar committee of the Grand Lodge of Oregon, A. F. and A. M. In 1925 he was general chairman of the International Christian Endeavor convention held in Portland, and in 1927 acted in the same capacity for the convention of the International Fire Chiefs Association. He is a past president of the Oregon Christian Endeavor Union and is a member of Westminster Presbyterian church, Portland.

As judge of the circuit court of Multnomah county, Jacob Kanzler is held in high esteem by the general public as well as the legal profession, and his enviable record as lawyer, military officer and overseas veteran, banker, jurist and public-spirited citizen has gained for him the confidence and deep respect of the people of his city and state. 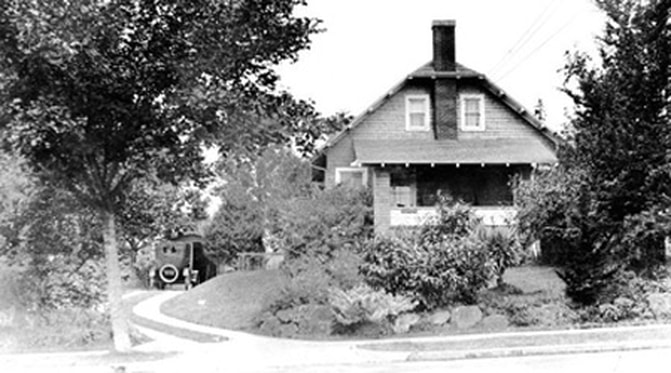 Home of Judge Kanzler in the Eastmoreland neighborhood in SE Portland. The photographs was taken in the 1920s. Photograph courtesy of Jim Buskirk. According to Jim, the original photograph bears the undated annotation on the back, "our home and first car," in his mother's handwriting.

Lockley, Fred. History of the Columbia River Valley from the Dalles to the Sea. Vol. III. Chicago, IL: S.J., 1928. Print.

Scheuerman, Richard D., and Clifford E. Trafzer. The Volga Germans: Pioneers of the Northwest. Moscow, ID: U of Idaho, 1980. Print.

""Perfect Baby" is Shown at Salem. Jane Kanzler Carries off First Honors at State Fair, and She Hails from Portland." The Oregonian [Portland] October 4, 1913, page 6.

"Jacob Kanzler to Get Bench Place. Judge for Court of Domestic Relations Chosen." The Oregonian [Portland], May 30, 1919, page 1.