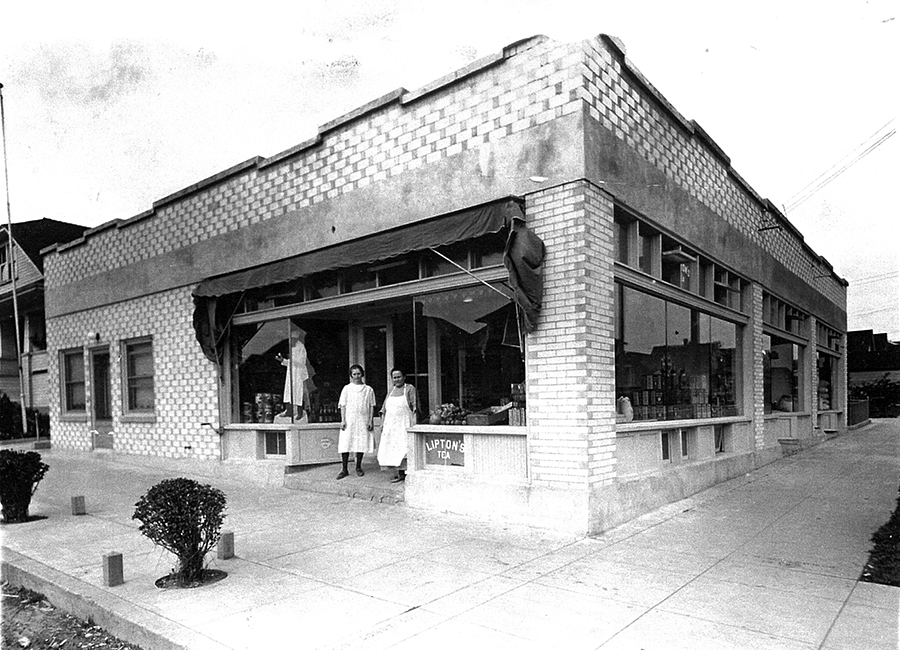 Danewolf's Grocery and Meat Market on NE 13th and Failing. Lydia and Marie Danewolf stand in the entrance to the store. Courtesy of Mary Smith.
When my Grandpa came over from Russia, he ended up in Portland, Oregon due to the fact that his brother, Julius Danewolf, and wife, Regina, came over previously and had advised him to come also. After arriving here he obviously thought it was good place so he sent for my Grandma and their daughter, Lydia, who was four years old and born in Saratov, Russia.

Upon arriving in America, my Grandpa, who was a baker by trade, had a bakery on NE Union Avenue and Monroe Street. In 1919, it was time to expand so they built a small grocery, bakery and meat market located on NE 13th and Failing Street. My Grandpa made sausage which everyone called rote wurst (red sausage). He also made leberwurst (liver sausage). He had a smokehouse in the basement of the building. The sausages became very popular, and I might add very delicious, and orders were coming in from other small grocery stores. My Grandpa and I delivered sausage on Saturday mornings to grocers in Northeast and North Portland. Many customers would order groceries and request them to be delivered, and my Grandpa and I would deliver them late afternoons.

My Grandma basically ran the business and took care of the bookkeeping with the help of my mother, Lydia. When I was six years old, my Mother and I moved in with my Grandparents. They had very nice living quarters attached to the store. My mother worked at the store while I treated candy to many kids. I guess you could say the candy made me very popular with kids in the area.

I can remember the salesmen and drivers who delivered to us would make a habit of getting there on Wednesdays and Saturdays as that is when my Grandma would bake all sorts of things such as schnitz suppe and grebel, kraut und brei, rivelkuchen, rogge brot, kraut bierocks, et cetera, et cetera. They loved it and, of course, were always welcome to have some. 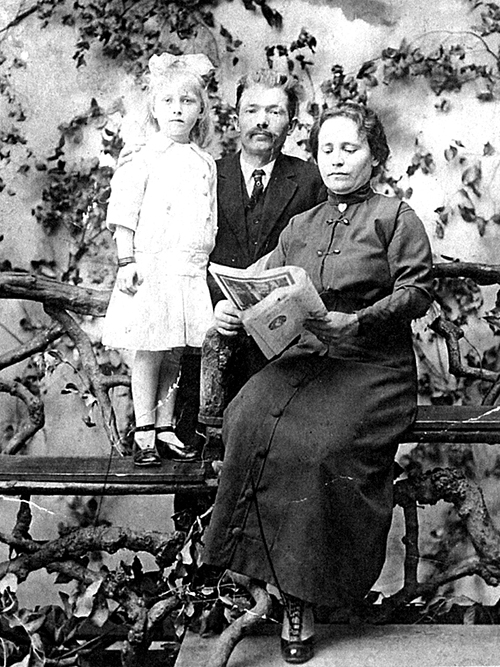 The Henry Danewolf Family. From left to right: Lydia Danewolf, Henry Danewolf, and Marie Danewolf. Photograph courtesy of Mary Smith (granddaughter of Henry and Marie Danewolf and daughter of Lydia Danewolf).
One of the highlights of many evenings after the store closed was to sit in front of the store chewing sunflower seeds which my Grandma roasted, and we would see how far we could spit the shells. It didn't take much to keep us amused. I remember my Grandma was very adamant about us sweeping up after spitting shells everywhere.

My Grandparents owned an empty lot on NE 12th and Failing. My Grandpa would plant the entire lot with gladiolas and dahlias. I would have to help him and I thought it was the worst job in the world except for bagging potatoes at the store. When the flowers bloomed he would cut them and my Grandpa and I would take them to the church, shut-ins, Dr. Uhle, Judge Donald Long, et cetera, et cetera at least once a week. He got great pleasure in doing this.

The other thing that my Grandpa did was to have a Christmas display on this same lot during the holidays. He had a barn with life-size cement animals, and Mary and Joseph and Baby Jesus. Angels were flying in the air attached to wire from the grocery store over to the Christmas display. He had a microphone and music set up in the basement of the house next door. He had a church in this display and music was piped in and my Mother and another Lydia would sing songs. They were known as the "Two Lydia's." Hundreds of people would come to view this. People would come in care cars, wheelchairs, et cetera. There was so much traffic, policemen were there to direct traffic. This would give my Grandpa much pleasure if he could make someone less fortunate happy. He didn't want any recognition, but one year he won the grand sweepstakes trophy from the Portland Chamber of Commerce for his contribution to society.

My Grandpa was a real character. He made people laugh. He loved life. My Grandma on the other hand was also a wonderful person but was more reserved.

When there were weddings coming up, my Grandpa and some of his friends would dress up in tuxedos, top hats, derbies (which were purchased at the Goodwill), and they would shivaree before the weddings. I can remember the best part of the weddings was that most receptions were usually held upstairs at Weimer's Furniture Store. They always served dinners with perhaps broda, coleslaw, rogge brot, et cetera, et cetera, and everything was homemade, and, of course, delicious wedding cake.

Another thing my Grandpa built was a huge rockery with a fishpond. It was located behind the store. There were statues in the rocks. It had the biggest goldfish I had ever seen. Many people would come by to view it.

My Grandpa had peacocks, chickens, roosters, pigeons, a large turtle (which was my pet) and two poodle dogs. It was like a miniature zoo around there.

There is much more I could say about the Danewolf's, but I will end by saying they were loved very much. You might say I am a little prejudice when it comes to my Grandparents ‑‑ well, I am ‑‑ they were wonderful, hardworking people, always willing to help anyone in need and extremely proud of being United States citizens.

Thanks for letting me share a little bit of the Danewolf history with you.

Written by Mary Smith, granddaughter of Henry and Marie Danewolf, and used with her permission.

Virginia Millar (née Schott) recalls that the St. Paul's Evangelical and Reformed Choir performed during the Christmas season at the display set up by Henry Danewolf on a vacant lot next to his grocery store. The choir stood behind a lighted church in the center of the display and sang songs in German. Their voices were amplified through loudspeakers for the spectators to enjoy. One year, Henry won first prize in the city-wide lighting contest.

Henry Danewolf had the store and residence built in 1924 at 1237 NE Failing Street (then 555 Failing). The building is currently (September 2019) serving as the New Testament Church of God.
Last updated September 2, 2019.