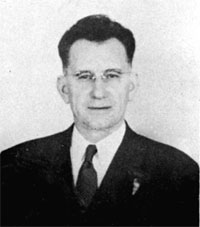 Reverend Theodore Christian Strobel followed Rev. John N. Sauer as pastor and served the Brethren Church from August of 1963 to its closure and merger with the Zion Congregational Church in August of 1967.

Rev. Strobel returned to Portland from California to live in retirement but he was asked and consented to lead the church for four years after Rev. Sauer retired.

Rev. Strobel was born on November 4, 1893 in Bethune, Colorado, a descendant of parents who were born in Bessarabia, South Russia.

Theodore graduated from Redfield College Seminary in June 1921 and was ordained to the Christian ministry July 2nd of that same year. A few days later he began his first pastorate at Leader, Saskatchewan, Canada, serving a parish of three churches until 1924. Pastorates that followed were:  a parish of five churches at Wirch, North Dakota (1924-1926); the Zion Church of Walla Walla, Washington (1926-1929); Ft. Collins, Colorado (1929-1933), Laurel, Montana beginning in 1933; the Zion Congregational Church of Portland, Oregon (1947-1952); Longmont, Colorado and Lodi, California. Rev. Strobel also served St. Pauls Evangelical and Reformed Church in Portland during its final years.

Rev. Strobel and his wife died in each other’s arms on February 10, 1983 – both from heart failure. He was buried at the Hope Congregational Church Cemetery in his hometown of Bethune.