Jacob (Jake) Hergert was the son of Rev. Elias Hergert, pastor of St. Paul's Evangelical and Reformed Church in Portland and his wife Mary. The Hergert family immigrated to the United States from Brunnental, Russia in 1907.

Jake was born August 22, 1918 in Ft. Collins, Colorado where his father was serving as pastor of a church. The Hergert family moved to Portland in 1925 when Jacob's father, Elias, accepted the call to serve the St. Paul's Church following the death of his brother, Rev. Jacob Hergert. 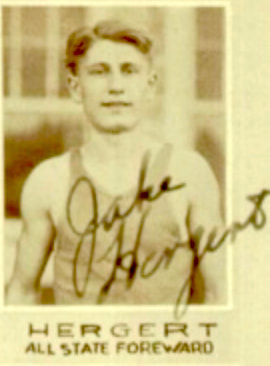 Jake lettered in football, basketball and baseball at Oregon State University for one year. He transferred to Notre Dame and later to to the University of Portland where he was a star baseball, basketball and football player. In 1941, He participated on the Pilots football team that defeated St. Mary's (14-12) in one of the biggest upsets of the season. 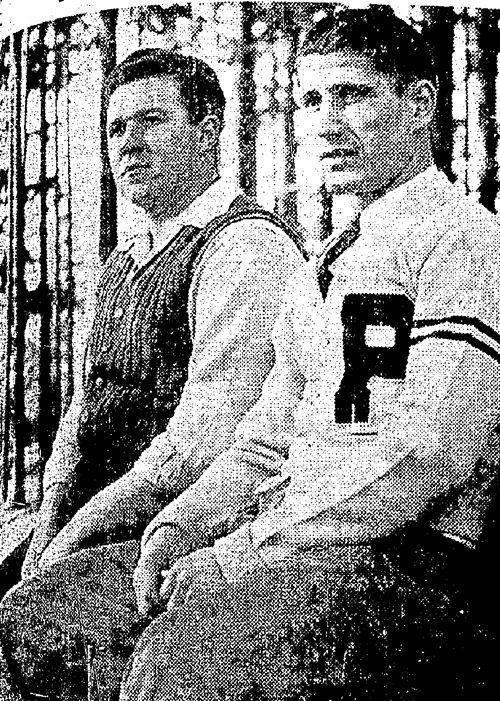 Photograph of Jake Hergert during his college days at the University of Portland. Photograph from The Oregonian Historical Archive.
The Oregonian reported that Jake received the Notre Dame Club of Oregon wristwatch for the senior who demonstrated outstanding scholastic and athletic ability. The award was presented during his graduation ceremony at the University of Portland.

​Jake went on to serve his country in the U.S. Coast Guard during World War II.

Jake died in December 1983 at the age of 65 and was buried at the Willamette National Cemetery in Portland.

Jake Hergert was inducted in the Portland Interscholastic League Hall of Fame in 2005.

I was the "manager" (read water boy) at Vernonia High School from 1943-47. Jake Hergert was coach. Jake had been a lieutenant in the U.S. Coast Guard and came to Vernonia in his uniform to apply for the position of coach and teacher.

We got into the state basketball tournament one year. Solly Hergert came to support his brother Jake.

Jake's favorite song was Margie. In 1946, he married Dorothy Voge, who was a teacher at Vernonia High School at same time as Jake. I attended the funeral service for Jake Hergert.

I was at a basketball game in Corbett long after the death of Jake. I saw on the program that one of the referees was named Hergert. I had to go and ask him if he was related. He said — if my memory is correct — Jake was his uncle. (webmaster note: the referee was Mick Hergert)

Jake is well remembered fondly by those he taught and coached in Vernonia.

When I was in high school it was not mandatory that students continue beyond 8th grade. Between junior and senior years (1946) I was thinking of quitting school. Jake Hergert talked me into continuing on to senior year and I did and graduated. I'll always be grateful to him for that. As I said, we all loved him. He was a good teacher (history was big with him) had a sense of humor, treated all the same, whether they were in sport or not.