Roy attended Benson Polytechnic (class of 1930). He played football and basketball at Benson. It's likely that he also played baseball, but information confirming that has not been found. Roy played right halfback on the 1928 football team and injured a knee ligament which kept him out of the last two games of the season. Benson yearbooks for 1929 do not list Roy as a member of the football, basketball or baseball teams. It is possible that his football injury kept him from playing. Roy did play on the Benson basketball team his senior year (1930).

Photograph of Roy Helser in 1928 from the Benson Polytechnic yearbook.
Outside of school sports, Roy played basketball for the First German Baptist Church which his grandfather founded in 1893. He also played on local team named the "Flying Dutchman" with his three brothers: Walt, Hank, and Morrie.

In 1932, Roy began his studies at Linfield College (now Linfield University) in McMinnville, Oregon. At Linfield, he became a three sport letterman (basketball, baseball and football) and earned 12 letters overall. During the 1935 football season, Roy broke his ankle in a game against Portland, ending his college career.

Roy left Linfield in 1936 to play professional baseball for the Portland Beavers and to coach an AAU team known as the "Y" Golds. He returned to Linfield in 1941 and earned his bachelor of science in Physical Education. During his return to Linfield, Roy played professional baseball with the Salem Senators of the Western International League in 1940 and 1941. It also appears that Roy first led the Linfield baseball team in 1941. 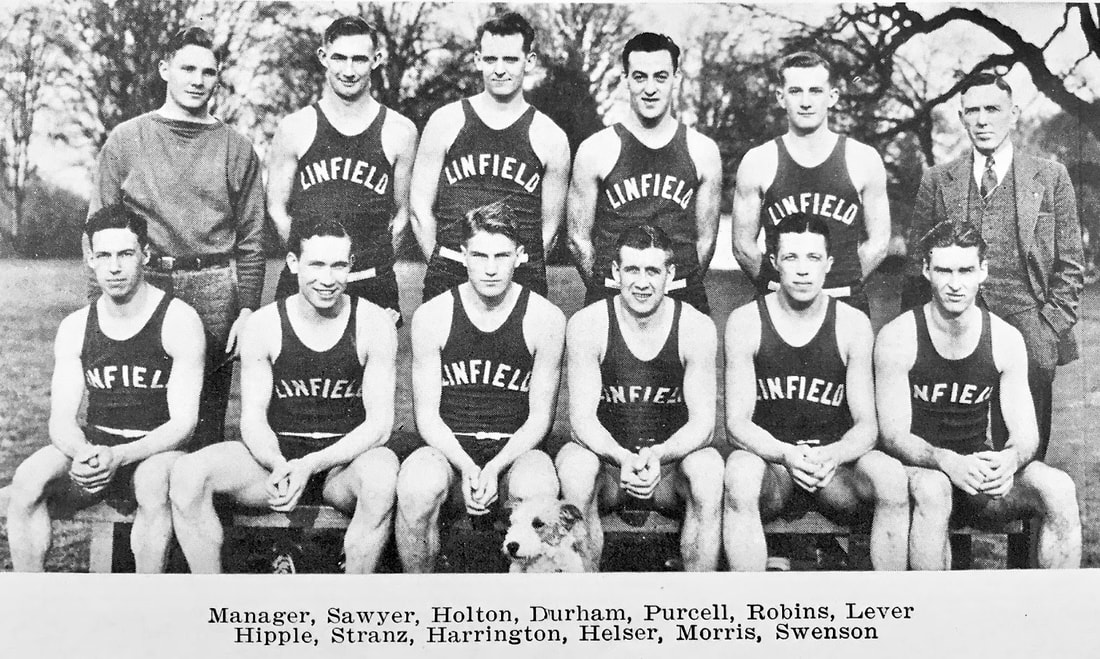 Roy Helser's Linfield basketball team. He is in the front row, 4th from the left. Courtesy of Tom Rohlffs.
From 1941-1942, Roy coached football, basketball and baseball at Lebanon High School. From 1944-1945 he coached basketball at Central Catholic High School.

During World War II, Roy played for the Albina Hellships, an Amateur Athletic Union (AAU) basketball team sponsored by the Albina Engine & Machine Works shipyard in Portland. The Hellships were a touring service all-star team led by 6-foot-8 former All-American Urgel “Slim” Wintermute, who in 1939 led the University of Oregon’s “Tall Firs” team to the championship of the inaugural NCAA Basketball Tournament 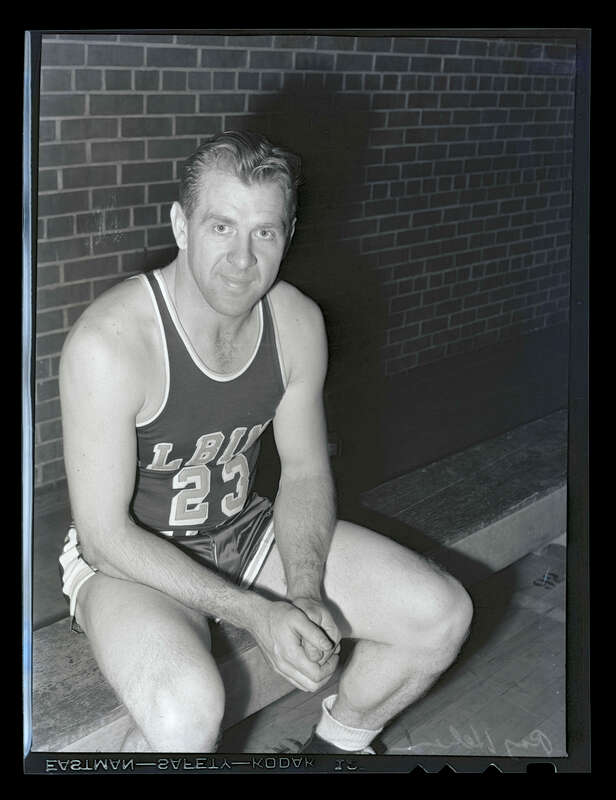 Photograph of Roy Helser in uniform for the Albina Hellships. Source: Oregon Historical Society Digital Collection and the Oregon Journal Collection.
Roy was a top pitcher with the Portland Beavers from 1943 to 1952. He was a member of Portland's 1945 Pacific Coast League pennant winning team. Helser had three 20 game winning seasons with the Beavers when their games were played at the old Vaughn Street Park.
Beginning in 1950, Roy coached baseball, basketball and football at Linfield College. As baseball coach for 21 years, Helser had a winning percentage over 60 percent (Wins 322, Losses 195, Ties 6). Helser's teams won 14 Northwest Conference championships and a National Association of Intercollegiate Athletics (NAIA) championship in 1966. It was the first national championship for Linfield in any sport. The 1966 team was inducted into the Oregon Sports Hall of Fame. Roy was known by his players as the "Bear".  Tom Rohlffs, a member of the 1966 baseball national championship team recalls:

Roy had a fetish about superstitions. While on our road trips we were to, besides playing "Hearts" for meal money, be on the lookout for a "white horse" rumored to be good luck and a sure win. If the horse faced forward, the victory would be substantial.

Roy was "loose" and it carried over to our teams. I don't think we feared any opponent. We won the NWC league and district championships earning a trip to the the national tournament in St. Joseph, Missouri. Eight districts champions met there in 1966. The NAIA didn't provide all the funds as they do today. Linfield took three planes to the tournament. Since Linfield didn't have much funds, the third plane team members were to fly "stand by". Since I was a freshman on the team, I was to fend more myself and get on the plane. I remember distinctly what Coach said to us. "See you there!" True. We were seeded 8th out of eight teams. We ran through the tournament winning all four games. The closest game was a win over #1 Guilford, North Carolina, 4-2. Coach Helser won with his style. His wit and humor was a plus to keep us loose. 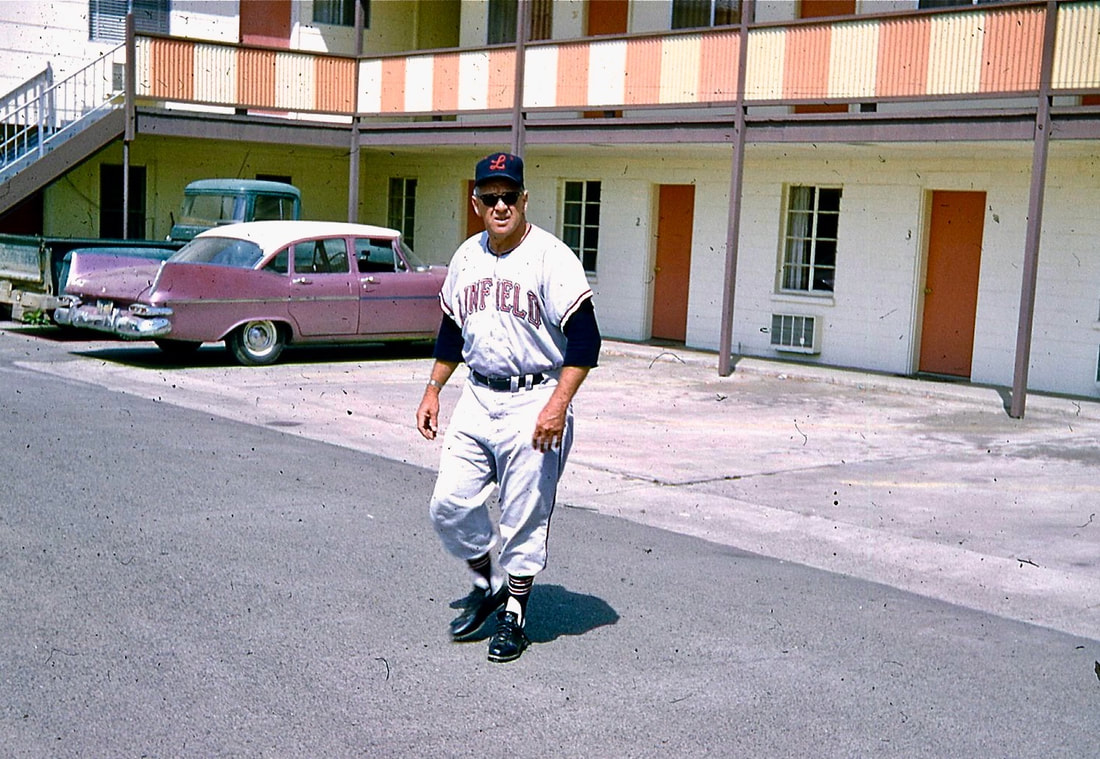 Linfield head coach Roy Helser at the 1966 baseball national championship in St. Joseph, Missouri. Courtesy of Tom Rohlffs.
After coaching, Roy served Linfield as Athletic Director for four years before retiring in 1972. The baseball field at Linfield was dedicated to Helser in 1973. “He was one of God's gifted people,” said Paul Durham, who was a classmate, coaching colleague and friend through the years. “I can't say enough wonderful things about him. I'm limited.” 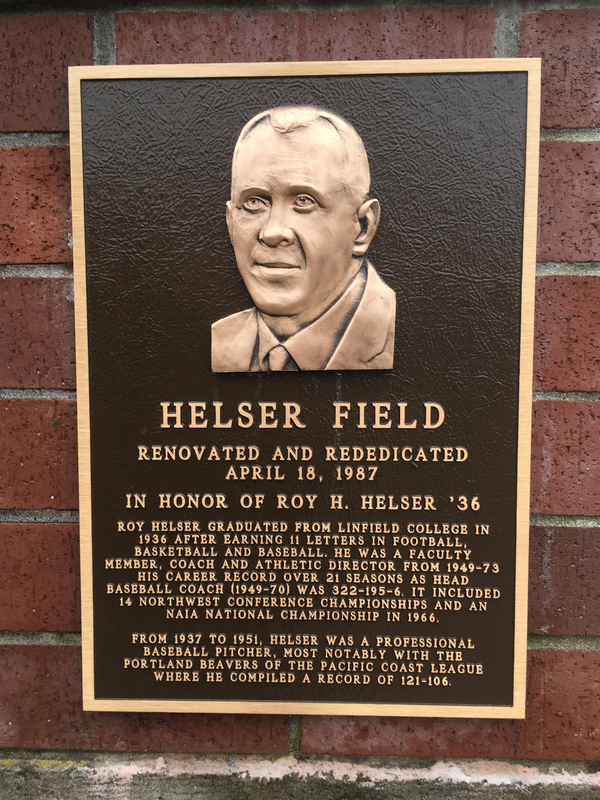 Plaque dedicating the Linfield baseball field to Roy Helser. Courtesy of Tim J. Marsh.
Roy was inducted into the Oregon Sports Hall of Fame in 1981. He was also named to the NAIA National Hall of Fame.

By KEN WHEELER of The Oregonian staff

WHO:  Former Portland Beaver pitcher and Linfield baseball coach
QUOTABLE:  “He was one of God's gifted people.” – Paul Durham, classmate, coaching colleague and friend.
The Portland native starred for his hometown baseball team, then added a national baseball title while coaching at his college alma mater

Roy Helser, a man who pitched with distinction for the Portland Beavers for more than a decade half a century ago, then later made a name for him­ self as a coach at his alma mater, Lin­field College, died at his McMinnville home Tuesday.

Helser, a native of Portland and graduate of Benson High School, was 83. Death was attributed to causes re­lated to age.

Helser, a left-hander, was a top pitch­er with the Beavers from 1942 to 1952 and was a member of Portland's 1945 Pacific Coast League pennant winning team.

It was an era when the Beavers played in old Vaughn Street ballpark and rode a wave of popularity that saw them draw nearly half a million fans 1947.

Later, Helser coached at Linfield for 21 years, then served as athletic director at the school for four years before retiring in 1972. The baseball field at the college was named after him several years ago.  “He was one of God's gifted people,” said Paul Durham, who was a classmate, coaching colleague and friend through the years.   “I can't say enough wonderful things about him. I'm limited.”

Durham, who lives in Hawaii, and Helser were classmates at Linfield from 1932 to 1936.  Durham returned to Linfield as football coach in 1949 and Helser joined him the next year.

During his 21 years as baseball coach at Linfield, the Wildcats won 14 Northwest Conference championships, and his 1966 team won the NAIA national championship.

One thing that marked Helser throughout his career was his competitiveness.

In 1956, four years after Helser left the Beavers, the team moved from Vaughn Street into what was then called Multnomah Stadium. A staple of the time among fans was Rollie Truitt's Beaver Scrapbook, and in that 1956 edition there still was a picture of No. 25, Roy Helser, beneath which was written, “One of the fiercest competitors ever to wear a Beaver uniform.”

Helser's pro baseball career started at Waterloo, Iowa, in 1937.  Later, he pitched for the Salem Senators of the Northwest League in 1940 and 1941, and then signed with the San Francisco Seals of the Pacific Coast League in 1942.  Late that season, he was acquired by the Beavers.  At first, it was part time.  Helser also pitched for a team in the Albina Shipyards League in 1943, before settling in as one of the Beavers’ top pitchers for the next several years.  He had three consecutive 20-win seasons, going 20-16, 20-14 and 20-16 from 1944 to 1946.  He also made a mark as a semi-pro player and manager in a time when that carried considerable weight, first with the Silverton Red Sox, then with the Drain Black Sox.  “He was one of the greatest competitors that I have ever known,” said Ad Rutschman, former football coach and current athletic director at Linfield who played both baseball and basketball for Helser at the school.

“He was just a great competitor, and that rubbed off on everyone.  The quality of his programs was always outstanding.”

Ted Wilson, who succeeded Helser as basketball coach at Linfield and worked with him there for 11 years, said:  “When we speak of Roy Helser, the first thing I think of is a great competitor.  He was like a brother to me.  We had a great time working together.  When I think of Roy, I think of honesty, strength, integrity, and compet­itiveness.  It's very difficult to realize he’s not going to be with us any longer.”

A memorial service will be held at 10:30 a.m.  Friday at the First Baptist Church at McMinnville.  The family has requested that remembrances be made to the Roy & Dorothy Helser Baseball Scholarship Fund at Linfield.

Marsh, Tim, as a student was sports information director (1968-1969) at Linfield College during the time Roy Helser was Linfield athletic director.

Rohlffs, Tom, is the OSAA Basketball Historian, a retired school teacher, author, local historian and coach. He graduated from Linfield where he lettered in baseball (played for Coach Roy Helser), basketball, track & field and cross-country.