Donald Howard Kirsch was born in Portland on September 29, 1920, the son of Gustav J. Kirsch and Rachel Helser. His mother Rachel is the daughter of Heinrich H. (born 1868) and Katherine Helser (born 1873) and a sibling of Hank, Morrie, and Roy Helser - all standout athletes. 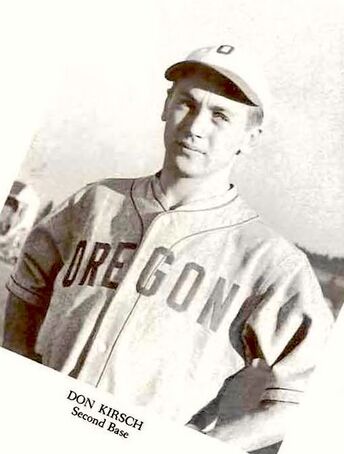 Don grew up in N.E. Portland, graduating from Jefferson High School in 1939. During his high school years he played both basketball and baseball. Don was a member of three Portland Interscholastic League championship baseball teams and was selected for the All-PIL teams in both baseball and basketball.

After graduation, Don attended the University of Oregon where he played baseball and basketball for the legendary Howard Hobson, who coached both teams. Don was a three-year letterman in both sports and was named captain of the basketball team in 1943.

Upon graduation from the U of O, Don went directly to Officers Training in Georgia. He became a 2nd Lieutenant in the U.S. Infantry. Don was immediately sent to Europe for active duty in the war against Germany. He was severely wounded by shell fragments in his back and neck and was sent home to recover.

When Howard Hobson left Oregon to coach at Yale in 1948, Don was named to succeed him as the Duck's baseball coach. In his 23 years, he never had a losing team. The Duck's won five Pacific-8 Northern Division titles and in 1954 went to the College World Series. Don's younger brother, Walt Kirsch, was also a standout athlete and played for him at Oregon. Another younger brother, Jim Kirsch, also played football for the Ducks.

Don was diagnosed with Parkinson's disease in 1967 but continued coaching until early 1970. He died on May 7, 1970 at the Stanford University Medical Center while undergoing an experimental medical treatment. He was buried at Rest-Haven Memorial Park in Eugene.

"He was to Oregon baseball what Len Casanova meant to football and Bill Bowerman did for track and field."