Constantin Brill was born July 31, 1846 in Sarepta, Russia, the son of Conrad and Anna Maria Brill.

The 1880 U. S. Census shows the Brill family living in Kellogg, Iowa in 1880. Constantin is working for the railroad. The family includes Constantin's wife Christina and their children: Marle, Katrina, Conrad, Adam, Nesbit and John. Also living in Kellogg was the family of Conrad and Sophia Schwartz.

By 1891, the Brill's were living on the south side of San Diego Street, six lots east of Margareta Avenue (later Union Avenue and now MLK Blvd.). Sadly, Adam would die a few years later on December 25, 1894 and was buried at the Lone Fir Cemetery. A daughter, Lizzie, died in April 20, 1897 and is also buried at Lone Fir.

The 1900 census shows the Brill family living at 397 Brazee Street (now 441 NE Brazee Street). Constantin was employed as an iron worker. Four children were living with them: John, Alexander, Christina and Constantin. John died on March 28, 1904.

The 1912 Portland City Directory shows that Constantin is working for Portland Iron Works. His sons, Alexander (Alex) and Constantin are operating Brill Bros. Bakery at the family home on Brazee Street. Sister Christina is working as a clerk for the bakery. 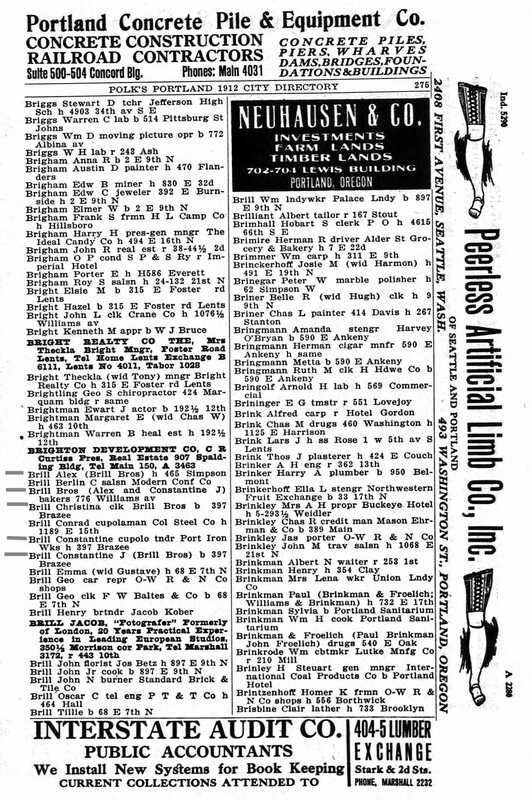 1912 City Directory showing the Brill family.
The Brill's resided at the same location in 1920. Constantin, now 74 years old, was working as furnace tender in an iron works. Daughter Christina was living with them.

Constantin and Christina continued living on NE Brazee in 1930. Living with them was daughter Christine, son-in-law George Schafer and their two children: George and Marian.

Christina Brill died on June 13, 1935 and was buried at the Lone Fir Pioneer Cemetery.

In 1940, Constantin is living at 411 NE Brazee with his daughter Christine and her family.

Constantin lived to be over 100 years old. He died on December 19, 1946 as was buried at the Lone Fir Pioneer Cemetery with his wife and four of his children on December 21, 1946.