People > Stories > What I Remember About My Grandfather, Jacob Hergert

What I Remember About My Grandfather, Jacob Hergert

He was born in 1859 and died December 1, 1923. When I was 9 years old I can well remember when he was buried as it was only a matter of days and I lost my Grandfather Netzer also. That was a sad time for me, as both of my grandfathers had close relationships in church matters.

My Grandfather Hergert, my father's father, was a very kindly person, very jolly at all times. He was a very heavy-set man with what is known today as a crew hair cut. I remember an oversized wicker rocking chair he enjoyed sitting in, and as a very young child I would climb on his lap and stroke comb his bit of hair, never really tiring of loving him. He taught me much about life, even at such an early age. 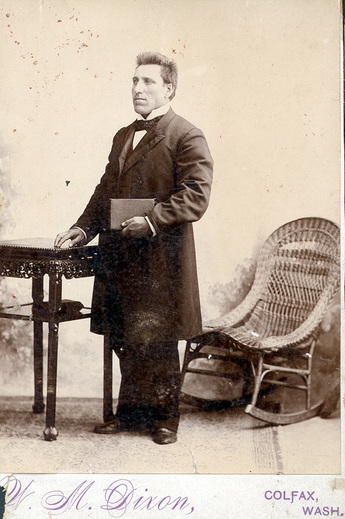 Rev. Jacob Hergert, founder of St. Pauls Evangelical and Reformed Church in Portland. Photograph courtesy of Herbert L. Hergert.
I can remember my mother sending me to grandpa and grandma's to stay while she was ill. Not having indoor plumbing at home, I was a questioning child. Not meaning any harm but too inquisitive for me own good. The world to me at that time was such a lot to understand.

How many times I was reminded of the time they had no bed to have me sleep in, so grandmother put a feather tick and pillow and blankets in the bath tub. In the night, I wanted to know what those two things on the tub were. So I turned the handles and all of my bedding became too wet for sleeping in. Well, needless to say, grandma, the firmest of the two, ordered grandpa to spank me. He tried to reason with her that I didn't understand, as I wasn't told not to touch. So he sad grandma says I have to spank you. That just about broke both of our hearts, as my jolly grandfather was so kind to me.

I have heard many stories relating to his kindness. He always had cookies or candy in his pockets for children. They all loved him. To know him was to love him. He loved to eat, and never a meal at the table until we all had prayed.

When I think now of the past, nostalgia is sweet to remember. I was to be thankful to the Lord for His great bounty. I often think what a difference it would have been if he had lived longer. He was so very active in all church endeavors. I was might proud of him, as I often walked with him on visitations.

Then too, I often remember now since I am a widow, about by two grandmothers who lived much of life alone, until the Lord called them home. I look forward now to the Lord's coming soon return, hoping I can become as strong as they were.

Written by and used with the permission of Lillian Brill (née Hergert). This story was originally published in the Brunnental Newsletter.

Lillian Hergert was born on September 16, 1914 in Portland, Oregon. She was the daughter of Solomon Hergert and Annie Netzer. She died May 24, 1996 in Portland. She was the granddaughter of Rev. Jacob Hergert who founded the St. Pauls Evangelical and Reformed Church. In 1934, Lillian married Edward C. Brill in Portland.
Last updated November 12, 2016.