​Together with their son Heinrich (born September 15, 1910), they immigrated to the United States arriving in New York harbor on June 16, 1913 aboard the steamship Amerika. The ship records show that John's nearest relative is his mother, Mrs. Eva Geis, who is residing in Walter, Russia. The ship manifest shows that they planned to travel directly to Portland, Oregon. 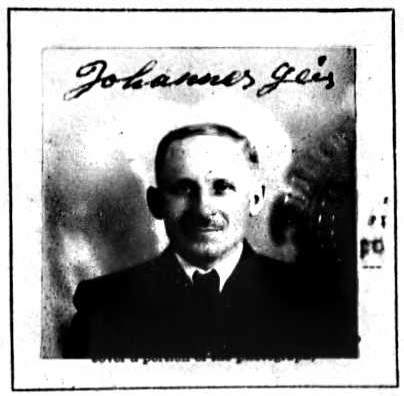 The 1920 U.S. Census shows John, his wife Mary and sons Henry and John are living at 815 E. 7th Street North, very close to the St. Pauls Evangelical and Reformed Church where they were members. John was a steelworker in the railroad car shops. In 1930, the family is living at 815 E. 7th Street. John's World War II Draft Registration Card shows him living in the same house (now 3907 NE 7th) and working for the Zoss Ladder Works on SW Macadam. John also worked in a cannery as a pickle maker.

John filed for his Declaration of Intention to become a U.S. citizen on July 18, 1936.

In 1940, John, mary and John Jr. are living at 3907 NE Failing and John is working at a pickle cannery (possibly Steinfelds).

In his later years, John was known to family members as "Papa Geis."

​Mary Geis died May 4, 1966 and was buried at the Rose City Cemetery in Portland.

John Geis died on January 20, 1979 in Hillsboro, Oregon and was buried at the Rose City Cemetery in Portland.

Two years before his death (1977), John was interviewed by Lillian Brill (née Hergert). Lillian was born September 16, 1914 and died May 24, 1996 in Portland, Oregon. Lillian was a lifelong member of St. Pauls Evangelical and Reformed Church which was founded by her grandfather, Rev. Jacob Hergert. In 1934, Lillian married Edward Constantine Brill. Edward served as a member of the board of directors at St. Pauls Church, along with John. Lillian asks John questions in English and John responds in his native Volga German dialect. Listen to the interview below.