Clarolyn Maier began her musical journey singing in her father's (Rev. Ray Maier) Congregational Church in Lake Oswego, Oregon at the age of four. She soon began private study on the piano and then became a dedicated student of the classical Harp under Marion Fouse of the Portland Symphony. Her collegiate career included USC's School of Theatrical Arts & UCLA's Department of Music. Clarolyn studied the Harp with Lou Anne Neill of the LA Philharmonic and classical voice within the workshops of musical theater at UCLA. She won the prestigious Carol Burnett Musical Theater and Gil Rodin Pop Music awards . After graduating, Clarolyn visited nearly 60 countries as the Harpist/Vocalist on the inaugural world cruise of the Royal Viking Sun and was featured on Good Morning America with Jimmy Stewart as “The Sun” prepared to set sail around the world. 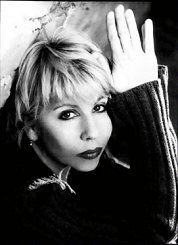 She has been seen on the Fox TV show Party of Five several times and was chosen to perform at Julie Andrew's premiere for The Princess Diaries in The Hollywood Arena Theater. Clarolyn was featured in Steve Perry's music video I Stand Alone from the Warner Brother's animated picture Quest for Camelot. She has performed for the likes of Quincy Jones, Leonard Bernstein, Henry Mancini, Michael Feinstein, Elizabeth Taylor, Leslie Bricusse, Frank Sinatra Jr., Roger Moore, and has opened for the jazz great Dianne Schur. Clarolyn continues to perform nationwide and internationally in top venues as a seasoned jazz and Broadway vocalist.

Currently on the national tour of the Broadway Smash hit SWING!, Clarolyn looks forward to headlining the show in Tokyo over the summer. Her albums, “Sessions” and “Standard Departures”, have received rave reviews in national publications(Time Out New York, Billboard, LA Jazz Scene). They feature her moving and powerful vocals adorned by her innovative, and jazzy, Harp performance. Both CD's present a star-studded cast of musicians.

“Her lush vocals evoke Streisand or Eder: dreamy, impassioned interpretations of familliar songs that still demand to be noticed. And, believe it or not, the harp's purr is more infectious and jazzy than those Windham Hill discs ever let on.”
- TimeOut New York

“...Maier's vocal warmth and lyric insights are the stuff of a first-rate cabaret singer. Her versatility in communicating great old standards and more contemporary material is enhanced by many excellent choices. Maier, who also plays keyboard, is ready and very able on all sorts of songs that require a special expressiveness.”
- Billboard Magazine

“...singer Clarolyn Maier blends her satin-smooth alto voice with "various artists," many of whom are household names to Southland jazz aficionados. Both a dramatic artist and a pleasing pop singer, she exhibits strength and emotion in her delivery. Maier's voice may be unfamiliar to the world at large, but she's got what it takes to become a superstar.”
- Jim Santella - L.A. Jazz Scene