Raymond (Ray) Peter Koch was born on April 21, 1926 in Portland, Oregon, the son of Peter (Pete) and Anna Koch. Peter Koch emigrated from Kolb, Russia around 1912 with his parents and they settled in Portland. Pete married Anna Marie Hartung in 1925. The Hartung family emigrated from Frank, Russia. 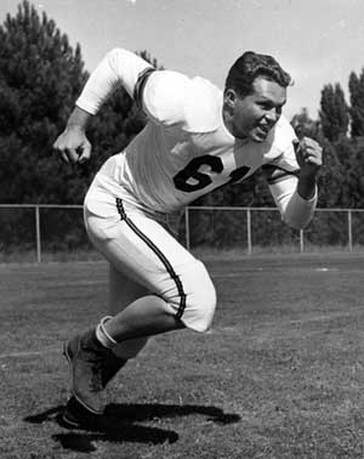 Ray Koch as a football player at Oregon State University in 1946. Courtesy of Ray Koch.
Ray attended Jefferson High school, graduating in 1944. He received an athletic scholarship to Oregon State College (now Oregon State University) and played offensive guard for the Beavers while studying business and engineering. His college was interrupted by service in the Navy during World War II, after which he graduated with honors in 1950. He later served in the Korean War, as an officer.

He met and married Donna Lee Davis in Portland, and they were married June 20, 1954. After accelerated one-year courses in chemistry and biology, which he completed in eight weeks with an A in both courses, he was accepted at the University of Oregon Dental School, graduating in 1957. Shortly after moving to The Dalles the same year, his first child Peter was born, followed in 1960 by son Robert.

He practiced dentistry in The Dalles for 35 years, retiring in 1992. He was an active member of The Dalles Yacht Club, The Elks, The Dalles Athletic Boosters, and coach for The Dalles Little League and president of Mid-Columbia Babe Ruth Baseball for many years. He never missed a game that his sons played, anywhere in Oregon.

Ray's wife Donna died in 1991. He later married his best friend’s widow Diane Gabrielson in 1994. They both enjoyed watching any event that involved the grandkids, and traveled extensively, including a trip to Ray's ancestral villages in Germany.

Ray was a charter member, and served for six years as President of the Oregon Chapter of The American Historical Society of Germans from Russia, an organization his father had help found in 1971. Ray also served as a board member for AHSGR International. Ray's passion was tracing the family history back some 300 years. He was working on a book documenting his research when he died.

Dr. Raymond P. Koch died on September 20, 2010. He was passionate leader in the Volga German community and is greatly missed.