William attended public schools in Dönhof. He also learned the flour milling business, becoming assistant foreman and later general foreman of the mill.
In 1886, William decided to migrate to America. He traveled with his older brother, Johann (John), Johann's wife Anna and their young son, Johann. They departed from Bremen, Germany aboard the North German Lloyd steamship Ems. and arrived at Castle Garden in New York harbor on December 7, 1886. William remained in New York for about a month and then traveled westward to Denver, Colorado where he lived for about 8 months. There he met and married Anna Maria (Mary) Schmer on May 2, 1887. She was born May 1862 in Norka, Russia, the daughter Adam Schmer and Elisabeth Grün.

​Shortly after their marriage, William and Mary set out for Portland and arrived there in the fall of 1887. His brother John remained in Colorado for several years. He later moved his family to Portland where he worked as a grocer. 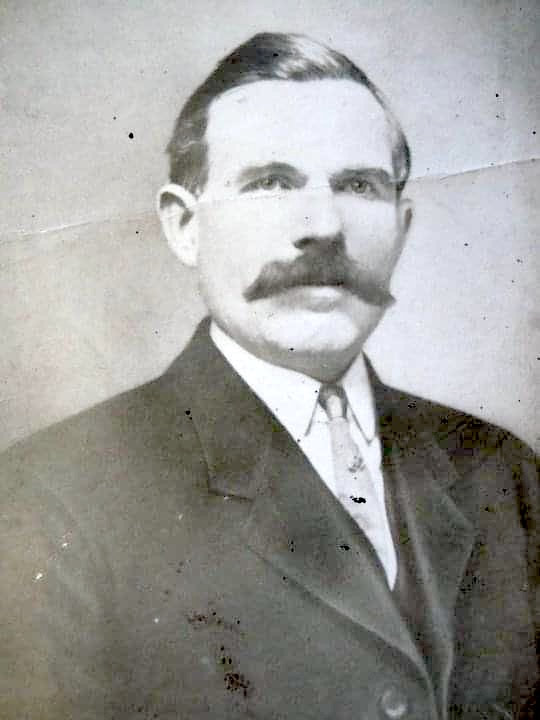 William and Mary became members of the Ebenezer German Congregational Church on March 18, 1900.

Soon after arrival in Portland, William began working for local paving contractors and also employed his milling experience for Portland Flouring Mills (owned by the notable William S. Ladd). By 1888, William made general contracting work his primary focus. His timing was excellent as the metropolitan area was growing rapidly. The cities of Albina and East Portland merged with the City of Portland in 1891 and construction work was plentiful. William was said to be the first in Portland to use hydraulic concrete which he employed on the steep grade of Russell Street in Albina. William became one of the organizers, a principal stockholder, secretary and treasurer of the Pacific Coast Westonmite Company, which introduced the "new and modern Westonmite paving", noted as "the most perfect paving devised yet".

From 1906 to 1908, William successfully managed a contract with the Burlington Northern Railroad to create a cut, up to 80 feet deep, that would run across the eastern plain of the St. Johns peninsula. The cut allowed for the construction of an at-grade rail connection between the Burlington Northern's Willamette River bridge (built 1906-1908) and the Columbia River rail bridge. The material excavated from the cut was used to fill low areas on the north end of the line as it approached the Columbia River. The rail line, all laid on hydraulic cement, continues in use to this day and is clearly visible on satellite maps. 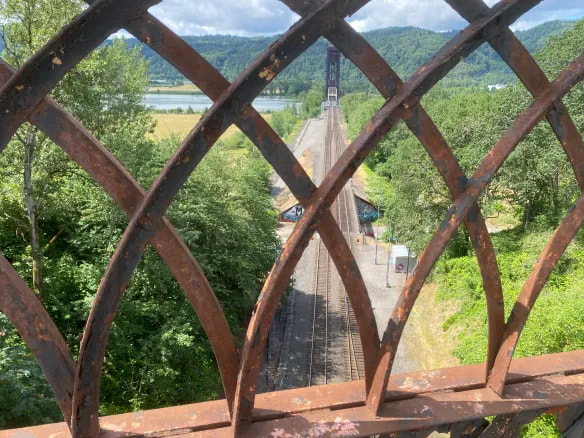 View looking southwest from the Willamette Blvd. bridge over the St. John's cut. The Willamette River rail bridge is shown in the distance.
William was also hired to do a large amount of bridge and road work in Clark County, Washington. Later, William was responsible for the construction of the Riverside sewer district, one of the largest projects in the Northwest at the time. Another of William's notable projects was building the concrete sewer system in Montavilla (1915-1916), the largest system in Portland at that time, employing 150 men. The $160,000 project was not without controversy as Lind was investigated for alleged defects in the system. He was eventually cleared of all charges. 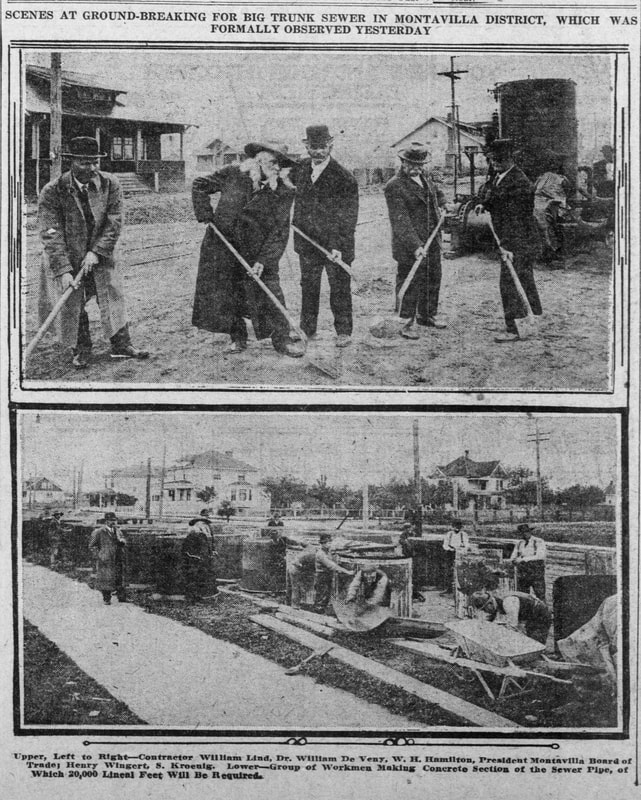 Photograph of the groundbreaking ceremony for the Montavilla sewer system in April 1915. William Lind is shown a the far left in both photos. Source: "The Sunday Oregonian", April 25, 1915. Source: Oregon Historical Newspapers.
In 1907, the Lind's built a beautiful home at 525 E 16th N. (now 2531 NE 16th Avenue). The William Lind House is now listed on the National Register of Historic Sites. William's general contracting business was headquartered in the Henry Building located at 309 SW 4th. 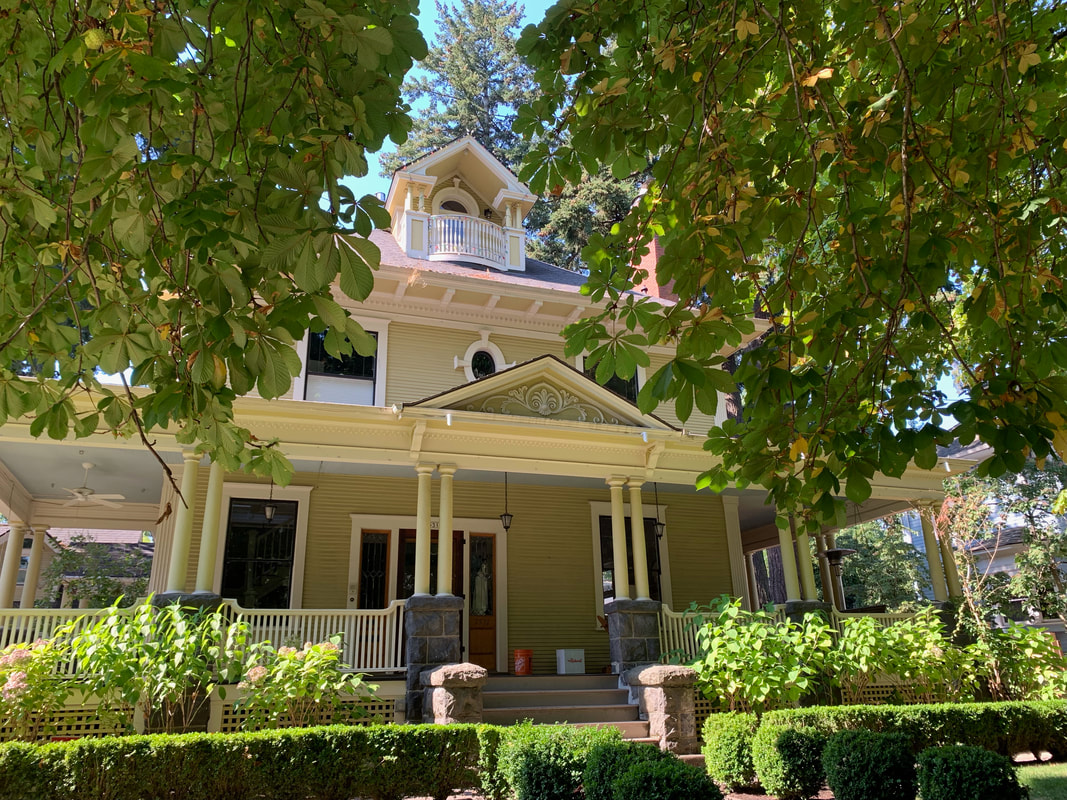 The William Lind House in 2022. Photograph courtesy of Kathleen Keller.
In 1914, William and Mary joined a group that founded the Zion German Congregational Church established by Rev. John Hopp. William became a member of the Hermannssöhne German mutual aid society. He enjoyed automobiling as a form of recreation.

William died on September 18, 1919 and was buried at the Rose City Cemetery. The following was written about William's life and published in an unknown source:

He resides in a beautiful home in Irvington, where, in the midst of his family and surrounded by his friends, he enjoys the fruits of many years of toil. He is one of the active and progressive men of western Oregon. He belongs distinctively to the type of men that "find a way or make it" wherever they are known. It would be difficult to conceive of a situation where such men would not succeed. Coming to America just as he was entering manhood, he wisely selected as his theater of operations a new country teeming with possibilities and responsive to the touch of energy and reading yielding its resources to the hand of man. His early dreams of freedom and prosperity have here largely been realized, and as head of a promising family, he is recognized as one of the envied citizens of an intelligent community. This position he has honestly attained through the old-fashioned application of industry and perseverance, and easily he bears his honors as one of the able representative employers of the city.

William's son, George William (born 1896), took over management of the general contracting business. He then passed control to his son George William, Jr. (born 1920) who continued the successful enterprise for many decades. 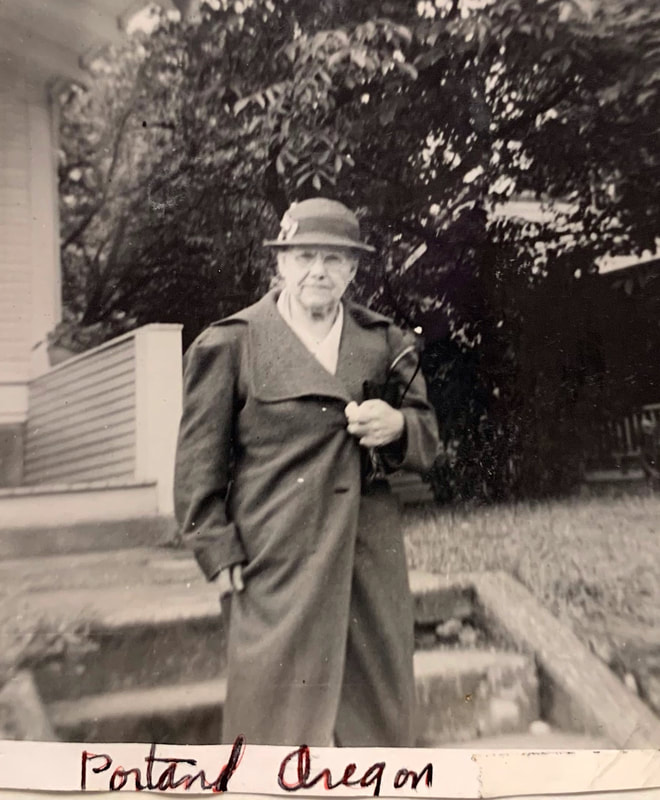 Mary Lind in 1939. Photograph courtesy of Kathleen Keller.
Mary lived many more years and died on May 1, 1960. She was buried next to William. 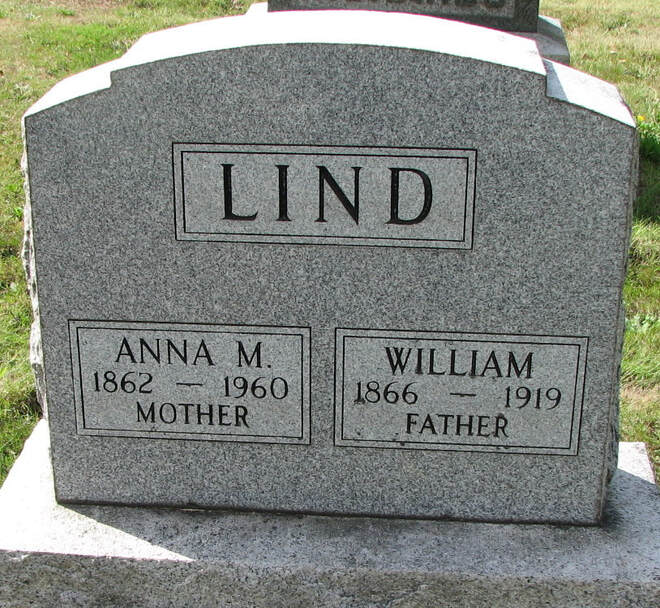 The headstone for Anna Marie and William Lind at the Rose City Cemetery in Portland. Source: Find-a-grave.com.
Read more about the life of William Lind in an article titled "The Montavilla sewer kerfuffle" by Patricia Sanders.

Keller, Kathleen. Photographs of William Lind, Mary Lind and William Lind's work crews. Also contributing to this biography is a copy of an article about William Lind's life from an unknown source that was type written by Kathleen's mother, Doris Mae Lind.