Weimer's Hardware and Furniture was located on 3934 N.E. Union Avenue (now MLK Blvd.) between Failing and Shaver. The store was across the street from Geist Dry Goods and Shoe Store.

Gottfried Weimer was born in Kraft, Russia on October 11, 1890. He immigrated to the United States after first arriving in the port of Winnipeg, Canada on November 24, 1914. He traveled directly to Portland where he settled in Albina. In 1917, Gottfried was living at 869 Rodney Avenue at the home of David and Katherine Kimmel (who were also from Kraft) and working as a cabinet maker at Nicolai Door and Sash in the Kenton area. 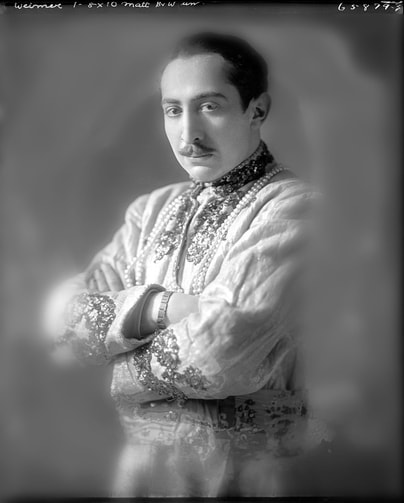 Portrait of Gottfried Weimer taken by the Bushnell Studio in Portland circa 1930. Weimer was known to perform the Russian Cossack dance and the costume worn in this photograph is similar to a traditional Cossack shirt. Digital scan of the original glass plate negative courtesy of Craig Fransen.
Gottfried married one of the Kimmel's daughters, Emelia, on September 8, 1917 and they continued living in the Kimmel household on Rodney Avenue along with a daughter, Helen. Emelia was born in the colony of Kraft, Russia on January 17, 1902.

Around 1922, Gottfried bought a dilapidated building on Union Avenue and opened a stove repair shop that also sold new and used stoves. Gottfried later opened a newly built furniture store at 3934 NE Union, and the family lived next door at 3946 NE Union.

Gottfried and Emelia had two sons; Elmer (Bud) and Lawrence. The entire family worked in different aspects of the business.
Conrad Brill, one of the members of the Volga German community who arrived in Portland in the 1920's, wrote the following about Gottfried Weimer in his memoirs titled Memories of Norka:

​Mr. Weimer was himself a poor immigrant, who repaired and re-blackened stoves for his fellow countrymen, after coming from Kraft. He made rounds from house to house. He had roomed and boarded with a family, whose daughter he then married. He bought an old tumble down place on Union Avenue where he set up a repair shop and dealt in new and used stoves. Later he would build new from ground up, with financial loans from fellow Germans, which were transacted with a handshake. He went on to become one of the most successful businessmen in our community, selling on the installment plan. His customers were mostly Volga Germans.

​Weimer’s new furniture store had a second floor ballroom that was used for dances by the German American Club. The ballroom was forced to close during the Second World War, as Conrad Brill explains:

​When Mr. Weimer built his hardware store, they built a large dance hall above it for communal dances. A group, including Mr. Weimer, Mr. Geist, Dr. Uhle and others formed a German American Club and there were many good times at Weimer’s dance hall. When WWII started these clubs were frowned on as much as the Japanese people's right to live on the West Coast. Dr. Uhle was a very outspoken man who got into several arguments at the hospital with one specific Jewish doctor. He was accused of being un-American for his outspoken feelings and the German American Club was named as un-American and closed up. Dr. Uhle was sent east as far as Chicago. The others explained to the authorities that they were German speaking people who actually were from Russia and not German nationals, so other than closing the club all went well for them.

Harold Kammerzell recalls that Weimer would perform the Russia Cossack dance, also known as Kazachok or Kozachok dance, in which the dancer squats, kicks his legs, and leaps through the air. Clearly Weimer had seen this dance performed many times in Russia and carried on the tradition in America.
Gottfried Weimer's son, Bud, took charge of the business after his father's death in October 1948 and managed it until riots broke out in Albina in the summer of 1969. That summer was the third in four years that had seen disturbances in the area. The troubles in June 1969 were extensive, violent, and lasted for several days.
​The Weimer building was damaged at the very outset of the troubles that began on June 14. When police responded to complaints about youth in the area throwing rocks and bottles, they arrived to find roughly 150 teenagers gathered, a fight between the youths and the police broke out. Trouble spread onto Union Avenue, and during the fight, several people were pulled from their vehicles by youths and beaten. One was a taxi driver, whose vehicle was “still in gear [and] rolled into the showroom window of Weimer’s Furniture Store at 3934 NE Union Ave.” (The Oregonian, June 15, 1969).
​ An article published in The Oregonian (June 17, 1969), titled “Police, Witness, Participants Offer Explanations for Albina Disorders”, reported the following incident:

​Two versions are being reported of the cause of disturbances that erupted in the Albina area over the weekend.

George Davis, night manager of Lidio’s Drive In Restaurant, 4011 NE Union St., [sic] said the troubles started when the officers used their clubs on two Negro girls they were attempting to arrest.

Kent Ford, who identifies himself as a captain in the Black Panthers,… arrested Saturday morning on a charge of inciting a riot, said police provoked the incident as an excuse for jailing Black Panthers and other Negro militants.

“The whole thing here is freedom, and the police don’t want us to have it,” said Ford….

“We want fascist pigs (police) out of the Albina district. We don’t need those pigs here,” Kent said.

Capt. [William] Taylor [commander of the Police Bureau] said Negro militants have been attempting to agitate trouble in the area… Shirt-sleeve weather and hot nights… also were given by Capt. Taylor as possible reasons setting off the disturbances.

​Another article titled ”Blacks Said Responsible to Entire Community,” was published in The Oregonian on June 17, 1969:

"Responsibility of blacks is not just to the ghetto, but to the total community,” black students at Portland State University were told Monday.

Patricia Roberts Harris, first American black woman to become an ambassador, spoke at a noon luncheon at Portland State to kickoff the Martin Luther King scholarship fund drive. She said she wanted to see more blacks in positions of major leadership, not just leadership in the ghetto.

“Whites take comfort when they can point to some of us successful blacks,” said Mrs. Harris. “But the truth of it is there are so few of us that it isn’t significant.”

Worse was yet to come, for Albina and for the Weimer building. Rioting and police confrontations continued on and off for several days, until a wave of fires broke out on the evening of June 17. The Weimer building was among those torched; The Oregonian reported that efforts to fight the fires were hampered by a fire hydrant whose water had been turned off (police were dispatched to guard hydrants in the area) and the beating of a fireman.

​The Alberta Furniture Store at 1905 NE Alberta St., and Weimer’s Furniture Co., 3838 NE Union Ave., were destroyed by what police described as “a better class of firebombs” than have been used in the four nights of unrest in Albina. Damage at each store was put at $200,000…. Thirty to 40 fire alarms were called during the night, and police reported that members of the Black Panther organization were maintaining a “firebomb depot” on NE Garfield Avenue.

​Attempts to fight fires were again hampered by assaults on fire hydrants and firefighters, and someone who shot a hole in a firehose.

The same article reported that several dozen young people picketed at City Hall to protest the arrest of the Black Panthers, writing that the “happy protestors, all white, carried signs about police brutality and references to ‘pigs’ (police). Few saw their marching and a lone policeman in a stopped squad car did not bother them.”

An article titled “Troubled Times in Albina" was published in The Oregonian on June 19th and reported on the deliberations of several Union Avenue business owners on whether to stay or leave the area. Bud Weimer reported that there was no way he would reopen Weimer’s, though he hoped to salvage the building enough that it could be used as a warehouse. After 47 years on the street, Weimer’s was out of business in Portland.

Bud moved the retail business to Tillamook, Oregon where he died on March 12, 1989.

In 2005, the long-empty “Weimer Warehouse” began undergoing renovation, and its transformation into the Heritage Building began. The Portland Development Commission (PDC) purchased the building in 1999, for $400,000, and in 2001 developers Eric Wentland and Jeana Woolley won the bid to redevelop the property. Renovation expanded the building from 18 to 30 thousand square feet, with ground-level commercial space and a variety of office spaces inside. The developers struggled to find financing to begin the renovation, and the PDC stepped up with a $2.4 million loan, with Albina Community Bank providing the remaining financing.