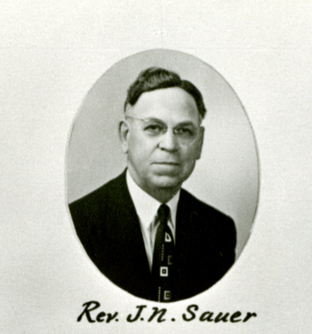 Rev. John N. Sauer followed seminary student Oliver Ketterling and served the Brethren Church from August of 1951 to August of 1963.

The Reverend Sauer was born on January 12, 1890 in Mannsburg, Bessarabia, Russia. He immigrated to Lind, Washington with his family in 1901 aboard the steamship Lahn and grew up in the Pacific Northwest. Before he was formally trained as a pastor, Sauer served the Zoar Church in Odessa, Washington and the Freudenfeld Church in Warden, Washington in 1918. He then attended the Redfield Seminary and graduated in 1920, after which he served as a circuit riding pastor in Burt, North Dakota. In 1925, Rev. Sauer moved to Idaho to serve congregations in Paul, Kimberly, Jerome and American Falls until 1928. Before his service in Portland, Pastor Sauer also served churches in Brush, Colorado; Fresno, California; the St. John Church in Lacrosse and a church in Colfax, Washington.

Rev. Sauer concluded 43 years in the ministry in August of 1963 after 12 years at the Brethren Church in Portland.

Rev. Sauer and his wife celebrated their 50th wedding anniversary in 1971 at the Zion Brethren Church (a consolidation of the Brethren and Zion Congregational churches).

Rev. John N. Sauer died on September 2, 1984 in Los Gatos, California at the age of 94. Following a memorial service at Rivercrest Congregational Community Church in Portland, he was entombed at Portland Memorial Mausoleum.