Stanley Earl Aschenbrenner was born in Spokane, Washington to Reverend Edward and Lydia Aschenbrenner. As a small child he lived in small towns across Oregon where his father served as a Methodist minister. Stan grew up admiring his uncle, Karl W. Aschenbrenner, who was a notable academic.

Graduating from Grants Pass High School in 1947, Stan was a rugged well-like football player and played the lead in a Gilbert and Sullivan operetta. An award-winning scholar, Stan also worked multiple jobs from age 14 on the railroads, in sawmills, and as a foreman in the hop fields to help finance his college education.

Stan attended Willamette University, were he first met and, 31 years later, married his wife, Jackie. At Willamette, he majored in philosophy, was elected Student Body President and was recognized as a Senior Scholar. 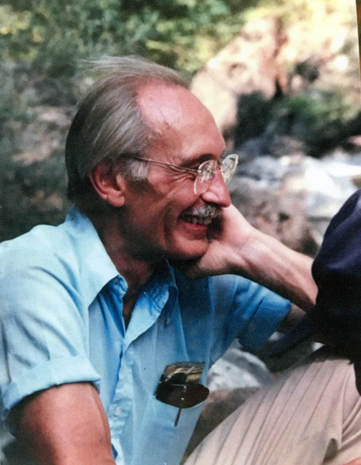 Portrait of Stan Aschenbrenner from his Celebration of Life program.
Stan began a graduate degree in Philosophy at the University of Oregon, until he was drafted. While in the Air Force in Biloxi, Mississippi, Stan worked on radar and acquired an interest in computers. Upon his discharge in 1956 he moved to St. Paul, Minnesota to run the technical documentation department for Control Data. Colleagues there remember him as a compassionate leader.

Despite his career success, his insatiable curiosity drew him back to academia. He earned his PhD in Anthropology from the University of Minnesota and taught Anthropology at the University of Minnesota-Duluth. He authored several books and earned a National Geographic grant. Stan became fluent in Greek, specialized in Greek archaeology, and led several archaeological digs. He purchased a home in the Greek village of Karpafora in 1973 where he spent summers and developed lifelong friendships.

Stan was tireless in his commitment to the common good. Issues for which he was passionate included equity, affordable housing and sustainability. After retiring and returning to Oregon in 1994, he helped complete more than 15 Habitat for Humanity homes, canvased for progressive political issues and candidates, and promoted sustainability, including his service on the Lake Oswego Natural Resources Advisory Board. He put his compassion into action as the Clackamas County representative to the Metropolitan Alliance for the Common Good, helped collect school supplies for Liberia, and served on the board of the Lake Oswego Transitional Shelter Ministry Board. He also organized teams and gleaned food from local stores to donate to those in need, despite the physical limitations age eventually imposed. Stan was a man of great integrity and compassion and took his commitments and convictions seriously.

Stan always had a to do list, wood working projects to complete, causes to support, books to study, and friends to keep in touch with. He was a loyal friend, tirelessly curious, and enduringly true to his convictions.

Stan modeled his life on this quote by John Wesley:

Adapted from the Celebration of Life program for Stanley Earl Aschenbrenner, dated September 29, 2018.