Rev. Kalmbach was followed by Rev. Theodore Strobel in 1947. 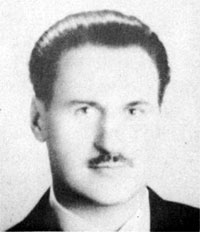 The Reverend Paul Kalmbach was born in Russia (a Russian German), came to America as a young lad of 16 years to settle in Calgary, Canada where he had relatives. He 1 at attended Redfield College Academy and then the seminary there. Still later he went to York College, in York, NE and was ordained a Congregational minister in 1925.  His first church was in Cheyenne, Wyoming where the parish consisted of two churches. The country church near Grover, Colorado had to be served every third Sunday.
Rev. Kalmbach married Amelia Louise Ament, a schoolteacher in 1925 while in Cheyenne.  They had a short stay in Wyoming since a call was received from the St. Matthew's church in Odessa, Washington, which he accepted.  It was there that two daughters were born: Loretta Elaine and Dorothy Lee.  The depression in the early thirties caused the family to seek better economic conditions and with regrets, Rev. Kalmbach was forced to move his family to a church in Hastings, Nebraska.  He loved the west so when a call came from Biola, California, he accepted.

After four years, Rev. Kalmbach received a call from Zion Congregational at Portland, Oregon and the family spent the World War II years in the City of Roses. Retiring from the ministry in 1947, Mr. Kalmbach became active in the real estate business and was quite successful.
He received word that his family had been destroyed in Russia during Stalin's regime. He had been responsible for keeping them alive for many years by sending a small stipend of his salary.

Mr. Kalmbach lost his faithful and beloved wife who had been ill for several years on March 13, 1969.  By then Portland had been their home for twenty‑eight years.

After his retirement, he chose to live with his daughter, Dorothy, a nurse in Seattle.  He turned those years into a worthwhile project by writing his memoirs and published (in 1977) the book entitled, An Angel on my Shoulder, a fascinating story of his life.  His survivors include the two daughters, Loretta, a schoolteacher who lives in Portland, Oregon and Dorothy of Seattle, six grandchildren and a host of friends.  One of his classmates at the seminary in Redfield remarked many years later that he had missed his calling - he should have been a comedian.  His experiences certainly prove that and his life is an example of what hard work and love can do.  He enjoyed his salmon fishing in the Northwest.
​
Note:  Marie Krieger of Portland, Oregon wrote this obituary.