New Haven Carriage & Auto Works was owned by John Wagner Jr., who was born June 27, 1880 in Brunnental, Russia. John was the son of Johannes Wagner and Katharina Batt who were among the earliest Volga German settlers in Portland.

John immigrated to the United States in 1906 and married Elizabeth ("Lizzie") Bauer.

John and his older brother George Wagner purchased the business from Frank Tannader, who lived in New Haven, Connecticut, thus the name of the company. The company furnished delivery vehicles to prominent Portland companies such as Meier & Frank, Maletis Inc., and Pacific Cocoa Cola Bottling.

John purchased George's interest in the business in 1927.

After John's death in May 1968, the business was run by his three sons: Charles, Edward, and Richard. The business was originally located in Southwest Portland and later moved to Southeast Portland. 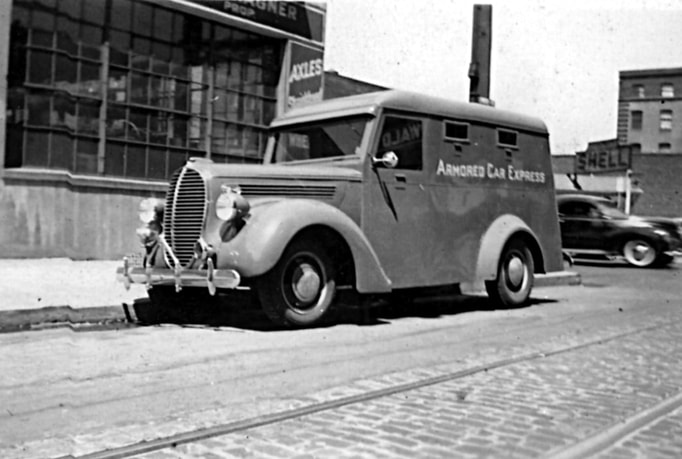 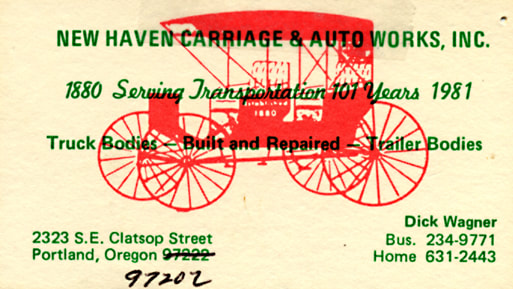 Courtesy of Walter Schreiber.
The following Oregonian article was written to celebrate the 100th anniversary of this business in 1980: ​​

of The Oregonian staff 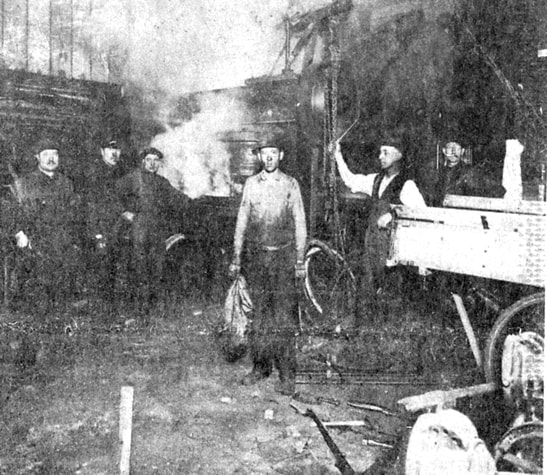 The business, which started out making horse-drawn carriages and now customizes truck bodies, will celebrate its 100th birthday July 4.

The date isn't the actual anniversary of the business founded in 1880 by Frank Tannader, a Swedish blacksmith from New Haven, Conn., No one today is certain just when Tannader opened up business at Northwest Fourth Ave­nue and Glisan Street.

“But if you're going to pick a date to celebrate, you might as well pick a good one," said Richard Wagner, company president.

With everyone geared up for the Fourth of July, July 3 seemed like a good time to hold an open house at the business location off McLoughlin Boule­vard to observe the July 4 “birthday.”

New Haven's business history is linked with that of other Oregon enterprises.

“The company built all the horse­-drawn wagons that Meier & Frank used to use at the turn of the century,” Wagner said. “Then when Meier & Frank went into trucks, we did that work, too. We still do all of Meier & Frank's customizing work.”

“Eighty-five percent of our business is return business - replacing and repairing equipment - rather than new customers,” said Wagner, 60, a native of Portland and a graduate of Jefferson High School.

Tannader, who started his business in New Haven; moved to Oregon with the big rush of population to the West Coast during the last half of the 19th century. In 1904, John Wagner, born in Russia of German parents, started work in the shop and by 1912 he and his brother George had acquired the business. John bought George out in 1927. Later, John's three sons, Carl, Edward and Richard, joined the business. Carl and Edward are deceased. Muth, who started as an apprentice body builder in 1945, advanced through the years to shop foreman and became co-owner in 1978.

“My father was a blacksmith,” Wagner said. “He came from a family of blacksmiths. In those days, the son always followed in the footsteps of their fathers.”

From 1880 until 1909, the company operated as a general blacksmith shop building and repairing horse-drawn wagons. The first truck bodies were constructed in 1909 and by 1914 the last wagon was built. In 1916, the firm moved to Northwest Fifth Avenue and Everett Street. It was located at Southeast 11th Avenue and Main Street from 1956 [note: this date should be 1958] to 1972, at which time it moved to its present site.

Open house hours will be from noon until 4 p.m., Wagner said.