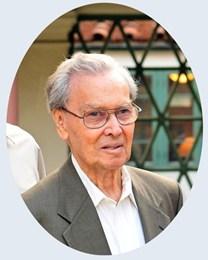 Student pastor Oliver Ketterling followed Rev. Brost and served the Brethren Church from September of 1949 to June of 1951. Ketterling served the congregation while attending seminary at Western Evangelical Seminary in Portland, Oregon.

Oliver was born September 7, 1923 and was raised on the family farm near Streeter, North Dakota. He graduated from Napoleon High School and Ellendale College with a teaching certificate. Later he attended and graduated from WestMar College, LeMars, Iowa, with a BA. Prior to moving to Portland in 1948, he married Annetta Schlenker of Gackle, North Dakota.

Following his graduation with an MA in pastoral studies he and Ann (and their two sons, Ronald and Barton who were born in Portland) returned to North Dakota to serve in the Evangelical United Brethren Church, North Dakota Conference. His first charge was at Linton North Dakota where he supervised building a church expansion while there and their third son, Robert was born. Oliver was then assigned to serve two churches, one in Hazen and one in Beulah, North Dakota. While there he supervised the building of a new church at Hazen. After serving there for five years, he and his family moved to another dual pastorate at Tappen, North Dakota, with the second church at Medina. A third church was added to his assignment the following year and he was assigned an assistant pastor, Clayton Schaeffer, to help with the preaching load. At this time, he also served as the Director of the Conference's Junior Camp for children. After eight years at Tappen, Oliver felt the Lord's call to move to California to pursue some additional education and begin teaching. They purchased their home in Glendora. Oliver attended Azusa Pacific University, and then taught at West Covina Christian School and later in the El Monte Public School System. Following his retirement from teaching, he worked with H&R Block for 15 years doing tax preparation. While there he earned his Enrolled Agent certification which demonstrated his proficiency in all areas of tax preparation.