Our church had Christmas programs with memorized "pieces". Only we walked to church in those days. The majority of our church members lived only a few blocks away. It wasn't until the late 1940s when WWII was over and more cars available for transportation that the city walking lessened, even for a few blocks. There was a surge in Sunday School growth as more children were born. A lot of the old people died and their daughters learned to drive.

Way back, we kids in Sunday School memorized "pieces", a poem or a story, given out a month before, to recite in German or English in front of the always packed church.  I don't think our Sunday School started pageants with costumes and different age singing groups until the 1950s. At the end of the program a red net stocking with the same contents as Rod described - orange, apple, hard candy - was given to each Sunday School child.  Later, one generous member donated a box of chocolates for each member of the senior choir. 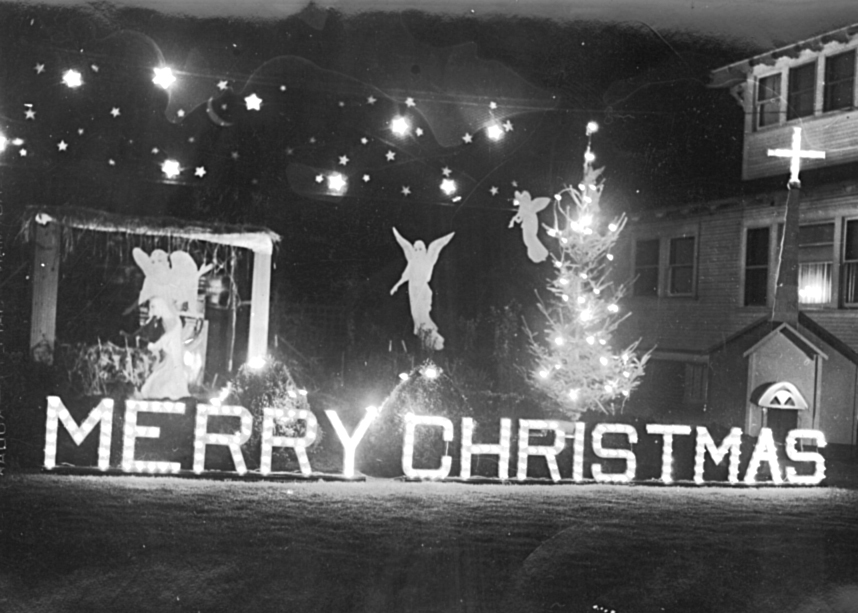 Until German was done away with in the church service, the Christmas hymns sung during the program alternated between English and German in my time.  Later, when all was in English, I remember the Christmas Eve when a new minister having a flash of inspiration looking at the old people in the congregation announced we'd all sing, Oh, du Fröhliche, Oh du Selige.  There was the usual rustling as the congregation stood up, then, surprising the little kids, tears came to the eyes of the old people as they sang.  Handkerchiefs suddenly appeared.

In Oregon you could obtain federal tree cutting permits. Just after WWII, several men in our family would get together on a December weekend and go up to a nearby mountain (federal land), chopping down one tree for each family.  The last time they went, their borrowed truck got stuck almost irretrievably in the snow.  When they finally were able to get out, there was a unanimous decision that each family could afford the $1 or $2 for a "boughten tree" from a neighborhood lot.

After Christmas Eve church service, we all gathered at a family member's home.  Gifts were exchanged.  When the family had increased, they changed to drawing names for gifts.  A favorite recipe potluck meal was always included.

Christmas Day featured another church service, but it was mostly attended by adults and few children.

Perhaps we city folk changed faster than people raised in the country.  My family is widely scattered.  The church building was eventually sold to another congregation and a new one for the church members built in the suburbs.  We celebrate Christmas quietly many states and years away.  Hopefully, churches somewhere still have the old Christmas traditions.  But then, I think I'd miss those old people I still remember who started the first traditions in a new church in a country far away from where they were born.

Story written by Eleanor Lake and published on this website with her permission.