Arnold George (Arnie) Weinmeister was born on March 23, 1923 in Rhein, Saskatchewan, Canada, the son of John George (John) and Susanna Weinmeister. In 1899, John Weinmeister immigrated to Canada with his parents from the Volga German colony of Dietel, Russia. In 1907, John married Susanna Werner who was also born in Dietel, Russia. 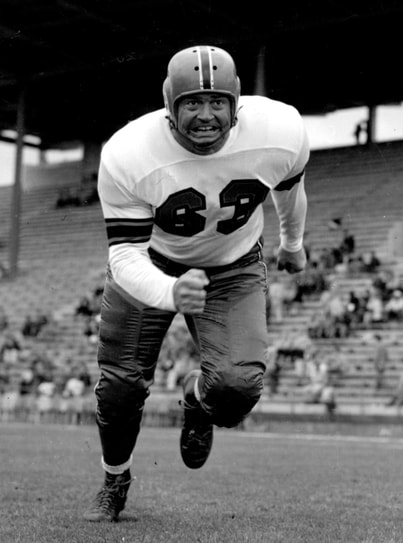 Arnie Weinmeister, No. 63, for the B.C. Lions. Photo taken on July 10, 1954. Source: Wikipedia (no use restrictions).
The Weinmeister family later moved to Portland, Oregon where Arnie attended Jefferson High School (Class of 1941) and was a two-time All-City tackle. He was inducted into the Portland Interscholastic League (PIL) Hall of Fame in 1987.

Weinmeister played end, fullback, and tackle during a 4-year tenure at the University of Washington which was interrupted by four years of service in the U.S. Army.

Weinmeister turned professional in 1948 and played defensive tackle for the New York Yankees in the All-America Football Conference until 1949, and for the National Football League New York Giants from 1950 to 1953. In his final season with the Giants, he served as team captain.

"Few players ever have been so dominant at their position in pro football than Arnie Weinmeister."

Weinmeister is also listed as one of The 50 Greatest Oregon Sports Figures by Sports Illustrated magazine.