The Honorable Vernon L. Schreiber, age 74, passed away due to complications following surgery on April 25, 2017.  He was born and raised in Portland, Oregon, where he graduated from Grant High School.  He received an appointment to the United States Merchant Marine Academy in Kings Point, New York.  After graduating from college and finding no jobs at sea, he went to Lewis and Clark Law School at night while working full time during the day.  He worked as a private practice attorney for 15 years in Clark County and served as a pro tem judge before becoming a Magistrate in Clark County District Court in 1987.  He was elected to the bench as a District Court Judge in 1998 where he was still working at the time of his death.  Altogether he spent 30 years on the bench. 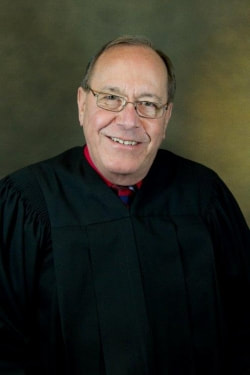 During his time on the bench, Judge Schreiber presided over Domestic Violence Court, Substance Abuse Court, Drug Court, Veterans Court and Mental Health Court.  He loved helping people turn their lives around.  Even in the most difficult times, he treated everyone in his courtroom with respect. He was always available to help out the other judges when needed.  Judge Schreiber really enjoyed working with the law enforcement community and being available for search warrants 24/7.  Having someone call or come by at 3 AM was never a problem for him.

In his personal life, he just wanted to be called Vern.  He enjoyed woodworking, photography, traveling, reading and spending time with his family.  Being a talker, he loved to visit with his friends at Starbucks.  Vern was known for wearing his Jerry Garcia ties and had an extensive collection.  In the last 20 years he enjoyed his travels to the Cook Islands, Hawaii, Thailand, Vietnam, Prague, and to New Orleans and Charleston here in the states.  Closer to home, he loved the Oregon Coast, especially Rockaway Beach.  He was a huge animal lover and over the years had dogs and cats.  He leaves behind four cats at home who will miss him.

His kind heart, ability to talk to anyone and his wisdom will be greatly missed by all who knew him.
Vernon is the son of Gottfried and Elizabeth (Döring) Schreiber from Norka, Russia.