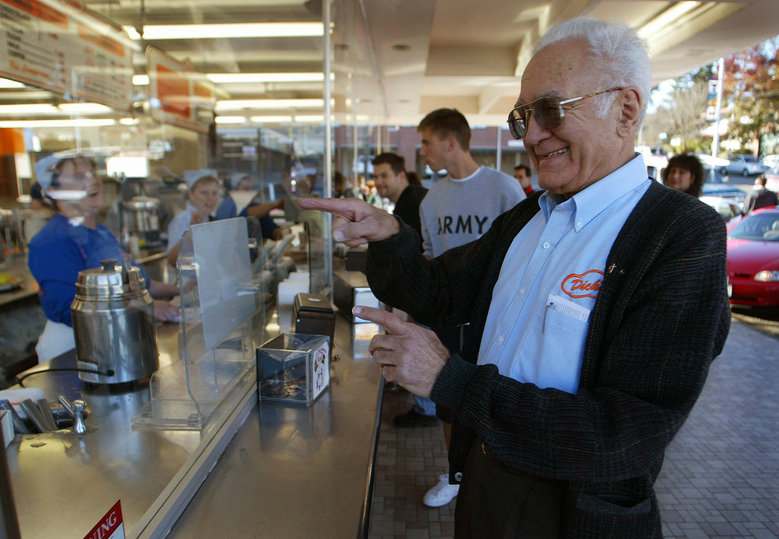 Dick Spady, co-founder of Dick’s Drive-In chain, pokes fun at some of the employees serving burgers at the original Dick’s in Wallingford on 45th in 2002. Source: Steve Ringman, The Seattle Times.
Spady spent his early years in Portland, Oregon, where he delivered copies of the Oregon Journal and also found a job sweeping a grocery store once a week for a dime. The grocery store job helped form his entrepreneurial spirit: A nickel of his wages would go towards movies in town, the other money was saved -- enough to buy an Emerson radio in the 1930s. He also worked as a telegraph operator for the Union Pacific Railroad, then served in the Navy in World War II,

After the war, Spady attended Oregon State University on the G.I. Bill and joined the Air Force ROTC. He was named Distinguished Military Graduate before his 1950 graduation.

Spady served as a commissary officer in the Korean War, a post which he credited with teaching him a great deal about how to run a restaurant. After serving in the tropics, he was shipped to Pearl Harbor, Hawaii, and it was there where Spady met H. Warren Ghormley, who later became one of his two business partners, forming Dick’s Drive-In restaurants. Spady later bought out both partners.

Spady opened the Wallingford restaurant on Jan. 28, 1954. A hamburger cost 19 cents, and from the very beginning, Dick’s was open until 2 a.m. for those in need of late-night sustenance.

Spady ultimately opened seven locations of what became a local institution. After Wallingford came Broadway (established 1955), Holman Road (1960), Lake City (1963) and Queen Anne (1974, and the only location with indoor seating).

A longtime fixture of Seattle life, Dick’s has been celebrated by artists such as Sir Mix-A-Lot, Macklemore and Blue Scholars. In 2012, it was declared America’s “Most Life-Changing Burger Joint” in an online Esquire poll, carrying 56 percent of the vote and besting hamburger heavyweights In-N-Out and Five Guys.

Part of what set Dick’s apart -- and one of the things Spady was most proud of -- was the benefits for employees. From the start, pay was always ahead of minimum wage. Employees working at least 24 hours a week receive full employer-paid medical insurance, and staff enrolled in college while working part-time receive $22,000 toward a four-year degree. Spady’s company also paid for community volunteer work.

In Seattle, the Spady family lived on Capitol Hill and then on Lake Sammamish. Mr. Spady was active in his church, and he was the recipient of numerous awards and honors, including an honorary Doctorate of Humanities from the University of Russia’s Open University of Education, “for contributions to Russian democracy and higher education.”

A 2012 Seattle mayoral proclamation for “Dick’s Drive-In Day” noted that the company boasted the lowest turnover rate in the industry, and that at the time, it had provided more than $1 million “to support local homeless charities, disaster-relief efforts around the world, and public-engagement efforts in Seattle, King County and now statewide.”

Spady received the Seattle Municipal League’s Business of the Year Award in 2005 and the Outstanding Philanthropic Small Business Award in 2000. The final responsibility of a successful business, he said, is building a sustainable community to help the common good.
​
Spady’s public efforts included sponsoring a 2007 initiative that led to his founding and funding of the Community Forums Network, a program to facilitate the involvement of regular citizens in public-policy decisions. His son, Jim Spady, said of the program in 2008, “We’re very excited. Dad’s been working on this for a long time. He loves this as much as he loves burgers, fries and shakes. That’s a lot.”

“It’s been a good life. I’m very fortunate,” Mr. Spady told The Seattle Times on his 90th birthday in October 2013 at the original Dick’s location in Wallingford. He celebrated by handing out birthday cake and signing autographs for fans grateful for decades of burgers and fries.

Dicks's son, Jim Spady, took on the presidency of Dick’s Drive-In, and the Spady family continues to own the company. Other than possibly opening more branches locally, they plan no changes.