Nicholas was conscripted into the Russian military to serve in the Russo-Japanese War. He served two years before gaining permission to leave to help support his family. Nicholas's brother Conrad immigrated to the United States in 1912. Nicholas stayed behind to help his parents manage their land. Nicholas could see that dramatic changes were coming to Russia and soon the European continent would be at war. Nicholas sought passports for the entire family and made arrangements for them to emigrate from Russia. 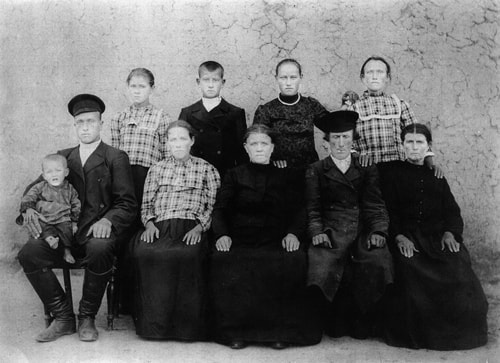 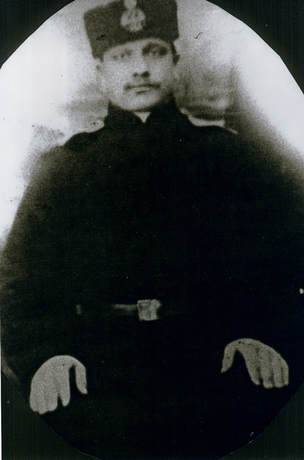 Nicholas Weber served in the Russian military during the Russo-Japanese War. Courtesy of Pat Hefflin.
The trip was complicated by the fact that Christina suffered from cataracts and the elder Conrad also had health problems. Due to their health problems, they were not allowed to board the ship. Nicholas worked tirelessly to overcome their problems and ensure that all the arrangements were made so they were able to board the ship. During the Atlantic crossing, they saw a smaller immigrant ship that had begun to sink. The passengers from this ship were rescused, but the family remained fearful about the remainder of their ocean voyage. Family stories tell that, Nicholas's sister, Catharina Maria, promised God that she would never dance again if their boat did not sink and she honored that promised the rest of her life.

The family sailed from Southhampton, England on August 28th aboard the steamship Ascania of the Cunard Line and arrived in Quebec, Canada on September 7, 1913. They traveled by train on the Grand Trunk Railroad from Quebec and entered the United States at Port Huron, Michigan on September 8, 1913. From Port Huron the family continued their journey by train to Portland, Oregon. The U.S. Border Crossing list states that Conrad and Catharina are going to the home of Conrad's daughter and son-in-law, Catherine Elizabeth (née Weber) and Heinrich Lehl, at 836 Mallory Ave. Another of Conrad's daughters from his first marriage, Anna Maria, married Philip Hohnstein and also resided in Portland.
​Christina gave birth to their first daughter, Pauline, on January 28, 1914 in Portland. Daughter Elizabeth followed on November 9, 1915, daughter Marie on February 17, 1919, and daughter Esther on February 14, 1921. 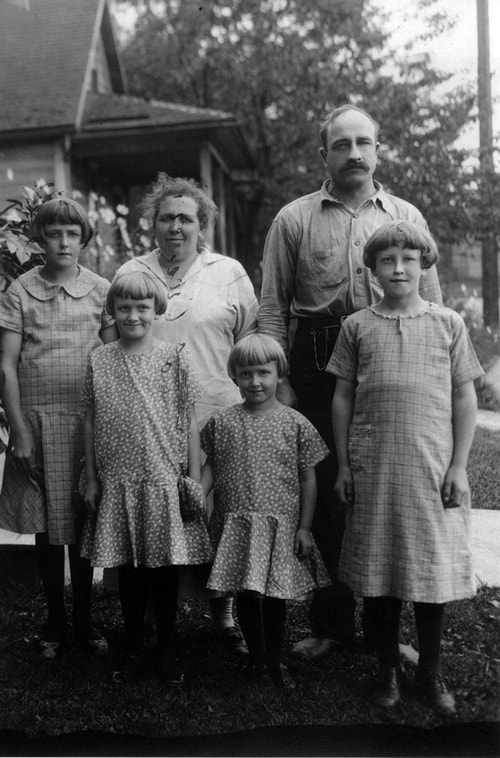 Nick and Christina Weber family in Portland, Oregon. Girls from left to right are: Pauline, Marie, Esther, Liz. Courtesy of Pat Hefflin.
Nick and his brother Conrad worked for the railroad as carpenters, then at the shipyards during World War I. Both men were exempt from the draft because they had families. For some period of time they would work a shift at Willamette Iron and Steel and then traveled to the shipyard in North Portland with their old Ford so they could work another shift. After World War I, the shipyard jobs ended and the railroads were no longer hiring. Nick and Conrad decided to purchase a garbage collection route for $1,500. The business included a wagon and two horses which were kept in the back yard near the barn. The horses knew the homes of each customers and stopped without Nick or Conrad getting on the wagon. Garbage was taken to dump sites at NE 33rd and Fremont and Interstate/Swan Island. Nick told the story of driving his horse and wagon team across the frozen Willamette River one particularly cold winter.

Family stories tell of Nick's fun loving nature. He enjoyed a good party and a drink, but never on Sunday when he taught Sunday School classes. Nick collected over $2,000 for his church.

One day, Nick and his brother Conrad decided they wanted to try flying in an airplane and got themselves a ride at the newly constructed Swan Island Airport.

Nick's children told how he helped many families and young boys who had no money and needed a job. One daughter said that she never knew how many people were coming for dinner each night.

In the 1930 U.S. Census (taken on April 7 and 8) the family is living at 760 Rodney Avenue. Nick's brother Conrad lived next door at 762 Rodney Avenue and his mother also resided with Conrad's family until her death later in 1930.
​
Christina Weber died on February 25, 1938 and Nick Weber died on April 19, 1943. Both are buried at the Rose City Cemetery in Portland.