Maria Schleuning, whose ancestors settled in the Volga German colony of Norka, has been a violinist with the Dallas Symphony since 1994, serving as the Artistic Director since 2009. 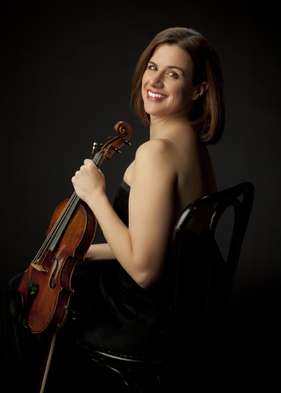 She is the daughter of Dr. Alexander and Patricia Schleuning of Portland, Oregon. She earned a master's from theJuilliard school where she studied with Joel Smirnoff. She has performed as a soloist with the Dallas Symphony, the Seattle Symphony, the Oregon Symphony, the Long Bay Symphony, the Columbia Symphony, and as alumni soloist for the 75th Anniversary of the Portland Youth Philharmonic.

In 2004 she performed the Barber Violin Concerto with the Greater Dallas Youth Orchestra on a tour of Eastern Europe. As a chamber musician, Ms. Schleuning has performed at Avery Fisher Hall, Alice Tully Hall, Carnegie Recital Hall, the Museum of Modern Art, Merkin Hall, and concerts with Villa Musica in Germany. She is a member of the Grammy-nominated Voices of Change and the Walden Piano Quartet, and has recorded with both ensembles.

Since 1993 she has been a faculty member at the Bowdoin International Music Festival in Maine, and has served in the same capacity at Idyllwild Arts in California since 2007.

Maria is married to Richard Giangiulio, principal trumpet with the Dallas Symphony.