A front page story in The Oregonian on October 5, 1938 recounts the story of Reed College physicists who made the old needle in a haystack problem look simple when they located $800 worth of radium in a mountain of garbage in 20 minutes flat. 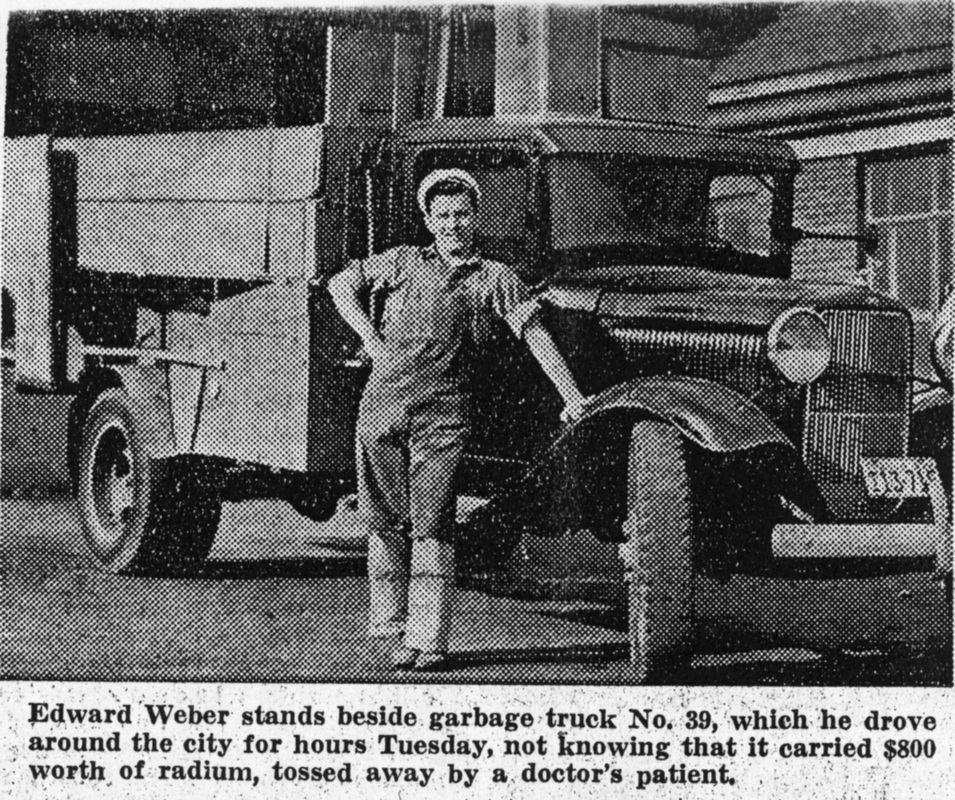 Dr. Thomas Ross had placed a radium plaque three-quarters of an inch square on a malignant infection of Mr. G. McDowell. Mr. McDowell  took the bandage plaque off after the prescribed hours and threw it in the garbage can. When he appeared at Dr. Ross's several days later without the radium plaque, a frantic search started.

Mrs. Elsie Higgs, daughter of Mr. McDowell, related that garbageman Edward (Ed) Weber had departed that day with their refuse.

Dr. Ross' assistants telephoned the city garbage department and learned that Weber was due at the Guild's Lake incinerator at noon. The doctors assistants also contacted the company that had insured the radium plaque as Dr. A.A. Knowlton and Dr. Marcus O'Day of the Reed College physics faculty for expert assistance.

Dr. Knowlton, two Reed students and a representative of the insurance company waited at the incinerator for hours and finally asked the police to broadcast a city-wide order to "find garbage truck No. 39."

Weber, still unaware of his cargo, reached the incinerator about 3 p.m.

Dr. Knowlton climbed into the truckload of garbage "with scientific zeal and detachment" and squinted through an electronic scope.

"It's in the front end," he announced.

The load was dumped and the garbage was segregated into piles.

"It's in this pile," Dr. Knowlton said, after some time. The student began filling boxes.

"There it is!" shouted Mrs. Riggs, who had worried more than the insurance adjuster. She dived into the pile and held the soiled plaque triumphantly.

No mention is made in the story about Ed Weber's reaction to this most unusual day as a garbage hauler.