​My Dad was John Deering (Johannes Döring). He and his family (father, mother, and two brothers) left Norka, Russia for the United States in June, 1913. Dad's father, Heinrich (Henry), was reluctant to make the move to America but the final decision was left to my Dad.  At the time of their departure, Dad was nineteen, his brother Peter was eight and his brother George was four. 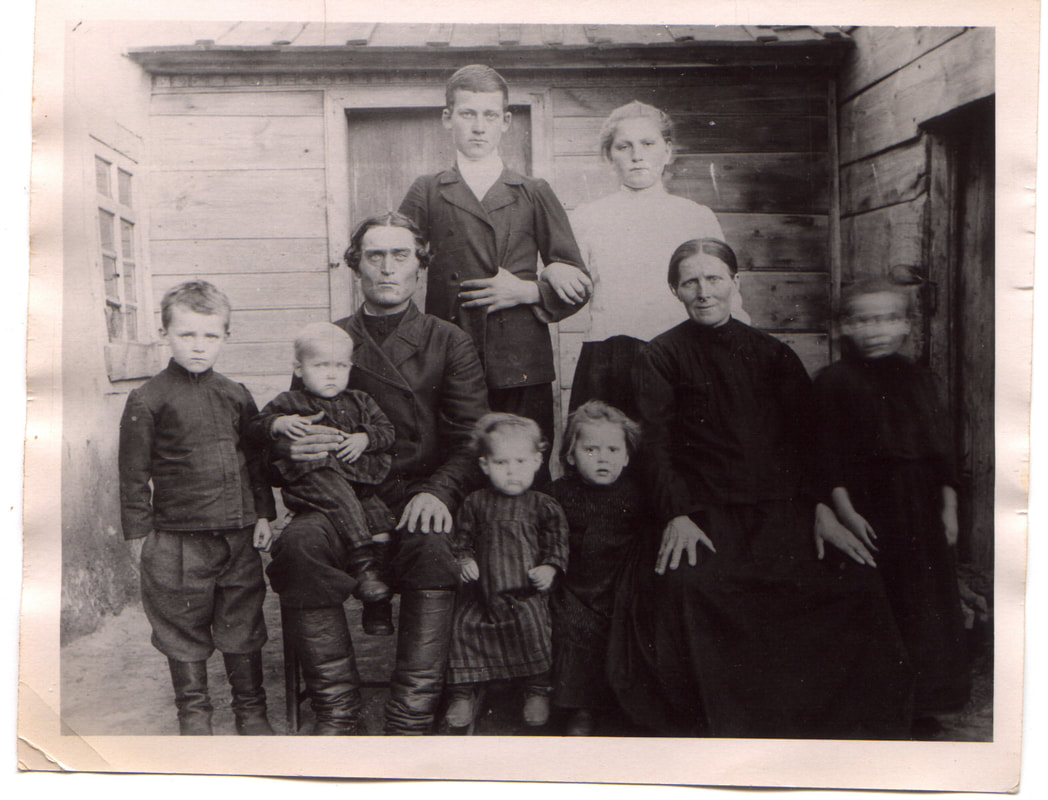 The Heinrich Döring (born 1873) and Anna Elizabeth Döring (née Klaus - born in 1870) family in Norka Russia circa 1912. Males left to right: Peter, George, Heinrich (father), Johannes. Woman on the right: Anna Elizabeth (mother), surrounded by four female cousins, names unknown.
They traveled on the steamship Dominion, first to Finland, then to Liverpool, and finally to Quebec, Canada. From Quebec they took a train to Portland via Port Huron and Chicago. During the trip, dad happened upon some Finnish people playing accordions, and he was very much impressed with the sounds this instrument produced. This explains why I took up the accordion! 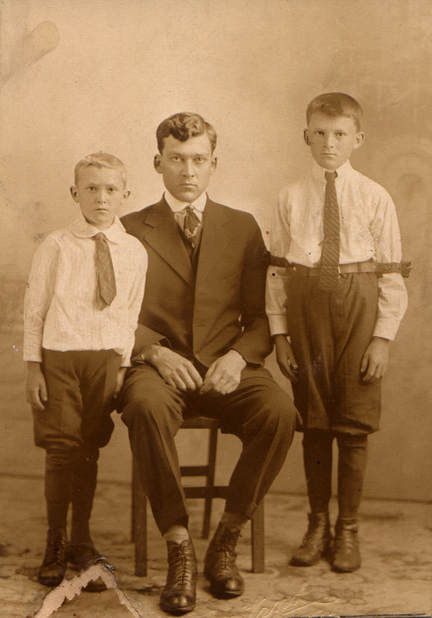 The Döring brothers in Portland, estimate date 1915; Left to right: George, Johannes, Peter.
During the train ride to Chicago, George was restless and noisy. A woman setting near to the family (an immigrant too) turned and slapped George. Dad, protecting his brother slapped the woman back, and the conductor threw him off the train! Because he did not know English, the conductor took pity, had him put on the next train, and he was able to get back together with his parents and brothers in Chicago.

Dad's maternal grandmother, Anna Maria Klaus (née Giebelhaus), and her sister were already in Portland, and they provided the new arrivals with a home to live in. Dad's father lived only nine months in the United States before he sickened and died at the age of 41.  When his father passed, dad became the sole supporter of the family. Initially, he worked in the brick yards during the day and went to school during the night to learn to speak and write English and to earn his U.S. citizenship papers. Over time he held several jobs and worked for several companies including Portland Cement and Portland Cordage. 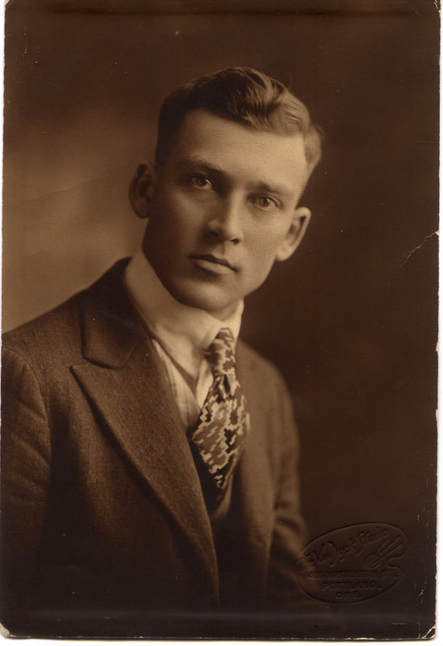 Portrait of Johannes Döring taken in Portland, 1920.
In 1919, Dad married my mother, Bernice Marietta King (from Lansing, Michigan), and in 1920, his mother (Anna Elizabeth) married Friedrich Rennich.  Rennich had a farm in Vancouver, Washington and at the time was living there with his two daughters Katherine and Emma.  Peter and George stayed with their mother and step-father Rennich living and working on the farm until they finished school.  I was born in 1921 and at some point prior to this time my mother and father rented Piggot's Castle. I spent my first three years of life in this castle and vividly remember among other things about our abode, scenes of the Portland landscape from the castle's turrets. 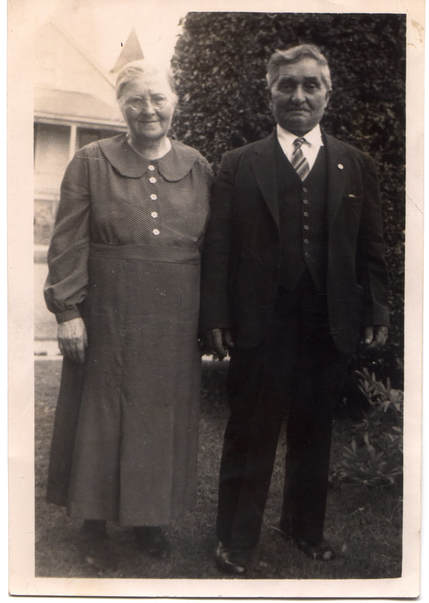 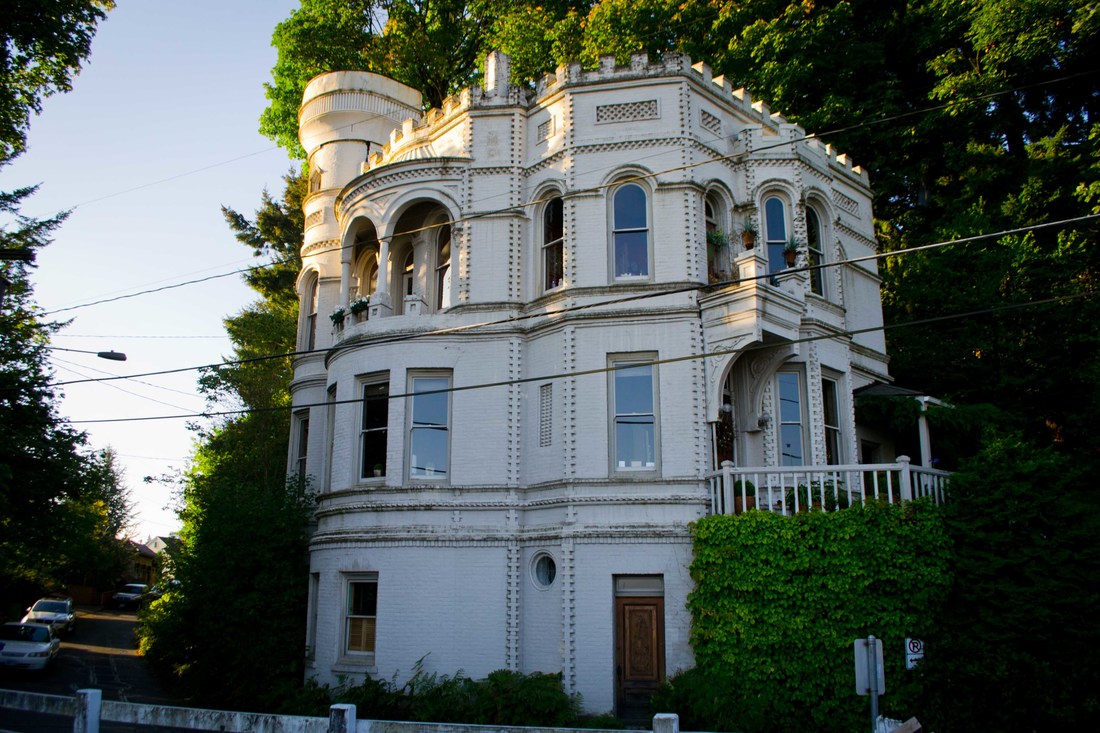 The Piggott Castle built in 1893 by Charles Piggott. Originally named Gleall Castle. Source: Wikipedia.com
In 1924 there apparently was an economic depression in the Portland area and dad lost his job at Portland Cordage. My mother's mother was living in Venice, California at the time and encouraged my parents to move to Los Angeles where there were jobs. They decided to make this move and we traveled to California via a cargo ship during the winter. I remember that there was snow and ice on the ground when we moved and that a sled was used to move our worldly belongings to the ship. I also remember that we encountered rough weather during the voyage. The shipment of lumber the ship was carrying was lost overboard and we were several days late in arriving at San Pedro.

Dad landed a job with Los Angeles Power and Light digging ditches. He did this kind of work until he obtained his citizenship papers in 1926 at which time he was promoted to "cable splicer". (At the time Los Angeles was placing all of their power connections underground. Dad was very proud of his citizenship, and being born on July 4th meant a lot to him.) He retired from LA Power after working for them for 35+ years. Peter and George remained in Portland. Peter married Esther Rickman and they had two boys. George married Pauline Lehl and they had two girls.  I understand that everyone called George "Doc" (I don't know why) and that he and Pauline operated the Milwaukee Sanitary Service. 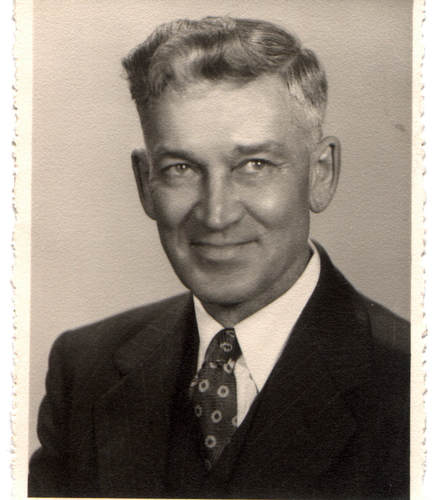 John Deering, 1950.
​Dad used to tell me about Norka as he knew it.  Here are a few things that I recall him telling me:

It was a very large community and life was very hard. The winters were cold and the community had to work in the spring and summer to prepare for the next winter.  The families depended on each other, and many things were done in common such as herding the animals on the steppes during the summer, and raising rye, wheat and oats, etc. Each family had their own home, and their own barns, animals, orchards, and garden plots. The church, Lutheran, was very important to the community; It was strict and dominated all aspects of life.

The rivers froze over during the winter and were used as highways. A common mode of travel on these highways was by horse and sleigh. Large hoops of bells were a part of the horse harnesses. Trips to Saratov were made at this time for special things like sugar, molasses, spices, cloth, some clothing, and to trade.

Schooling was limited to reading, writing and a little math, and German was the language that was taught. All children were expected to work with their parents so school was stopped in early spring and did not begin again until harvest was in, in the Fall. (Likewise, festivals, parties, and weddings were celebrated in the winter if weather permitted so as not to interfere with planting and harvesting.) School was held in a single room with wooden benches and wooden tables. The teachers were strict, and used switches for discipline. Part of their teaching was from the Bible. Dad obtained the equivalent of an eighth grade education.

The clothing people wore was very Russian. Boots were made of soft leather. Families would cure hides, tan them, and take them to a local shoe maker with an order of the kind and number of boots and shoes they wanted made. Dad's favorite was a soft, knee-high leather boot. One could also purchase heavy work boots or fur lined winter boots. Both men and women wore boots. Wool was carded, spun and knitted into sweaters, gloves, hats, socks, etc. Shirts and clothing of all kinds were made from linen and wool. This material was purchased or traded for. Winter was the time for replenishing clothing.

Feather beds were made for comfort and warmth. Grandmother Deering brought several with her to America. Uncle George and Aunt Pauline gave my husband and me pillows for a wedding present which were made from grandmother's feather bed.

Fruits and vegetables, such as apples, beets, squash, turnips and carrots were stored in a root cellar in large barrels. Cabbage was made into sauerkraut. Other things were pickled, smoked and put into crocks. A special sausage was made, smoked and hung in the attic. Part of the chimney was used for smoking the sausage bums. Dad's favorite treat was a chunk of sausage from the attic and an apple from the barrel.  (He liked them mellow.) – This he considered a feast. The family jokingly called the sausage "Russian Turkey". (I believe that Aunt Pauline's brothers were still making this sausage at their meat market in Portland in the mid 1980's.)  Their bread was like our sourdough bread, and a starter was kept going at all times.

Cooking was done with coal. Wood was very scarce and was used mainly for smoking all meats. Dad would say bacon would be the width of a hand, from little finger tip to thumb tip. He loved the crispy fat on all meats.

During winter cows, horses, chickens, geese and sheep were kept in large barns and sheds. In cold, cold weather, steam from the animals would pour out of the buildings when the doors were opened. The stalls were cleaned daily and the refuse was piled outside. In the spring this refuse was used for fertilizer and fuel. The fuel was prepared using large forms about two-foot square. They were packed tight with the manure and water, then dried in the sun and stored in a dry place. The fuel was used in a furnace which was fed from outside the house. Large adobe or mud type pipes were connected to the furnace and ran through the house. These pipes would be warm and in the coldest weather, the children's feather beds were placed on top of them for extra warmth. ​ 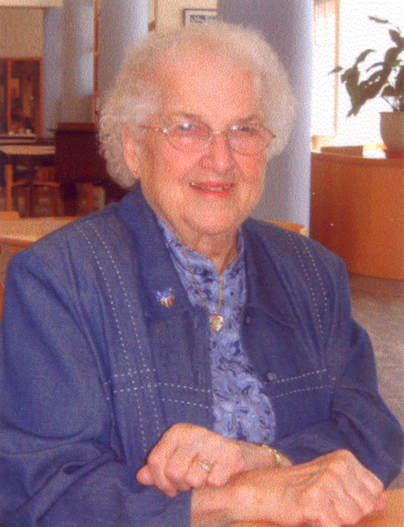