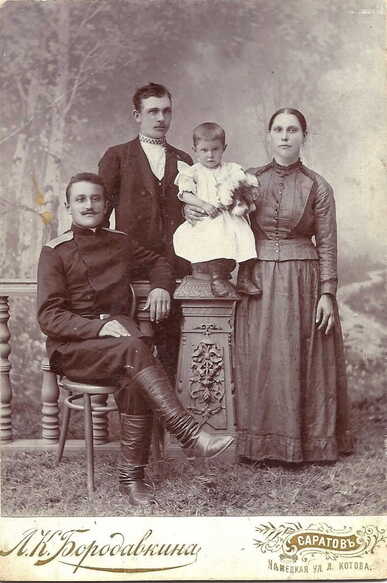 Photograph of Johannes and Magdalena Krieger, their young child, and a friend or relative wearing a Russian military uniform. The photograph was taken by a studio based in Saratov, Russia. Source: Ancestry.com.
The entire Krieger family departed from Norka on March 11, 1904 and arrived in New York on April 4, 1904 aboard the steamship Noordland. It appears that the family traveled directly to Portland.

At the time of the 1910 census, the Krieger family was living at 762 Rodney Avenue. John was no longer working. Philipp worked for the railroad and Henry worked at a furniture factory.

Magdalena died on October 24, 1922 and was also buried at the Rose City Cemetery.