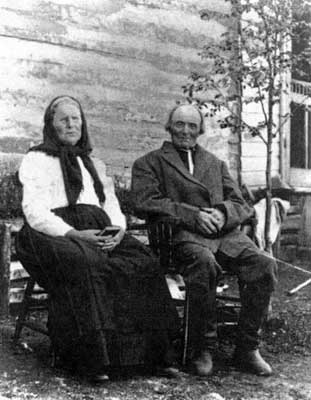 John, Mollie and Henry departed from Norka in 1892 and arrived in America in early 1893. The initially settled in Nebraska where a son John Jr., and daughter Elizabeth who were born. The family moved to Mississippi for a short time and John Jr. died there. The family story is that his high chair was knocked over by visiting cousins and he died as a result of the fall.

By 1903, the family had arrived in Portland, Oregon where three more children; Pauline, Flora and Louis were born. Pauline and Flora survived to adulthood. Baby Louis died at birth. According to family lore, Louis was the first baby that Pearson Mortuary took care of. John hired a taxi and held the small casket in his lap as they drove to the Rose City Cemetery where Louis was buried. 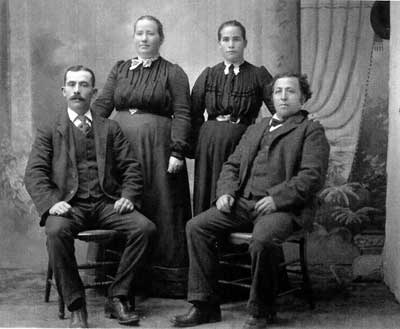 The Pfenning brothers from Norka. Johannes (John) and Heinrich (Henry) Pfenning, seated. Amalia (Mollie) Schwartz and Katherine Gerlach, standing. The photograph was probably taken in Lincoln, Nebraska after 1892. Courtesy of Marcia Lincoln Staunton.
The house that John and Mollie built is still standing on NE Grand Avenue between Failing and Shaver. Henry and Katherine stayed in Nebraska and raised a large family. Another family story says they came for a visit to Portland and she didn't like it here and made them move back to Nebraska.