Jim Beall was born in Hillsboro, Oregon, a descendant of Conrad and Elisabeth Derr, Volga German immigrants from Norka, Russia. Jim is the brother of Bob Beall and Gene Beall. 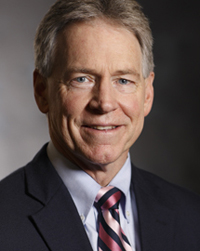 At Hillsboro High School (Hilhi), Jim was president of his class, quarterback of the football team and a starter on the basketball and baseball teams (Hilhi also won the State Championship in baseball his senior year, 1968). Jim also played on the 1966 State Champion football team.

Jim attended Oregon State University on a baseball scholarship, graduated in Liberal Arts in 1972, spent a year abroad and then attended law school at the University of Oregon.

​Jim is an attorney with 39 years of practice on (primarily) federal matters. He was born and raised in Oregon, but has spent a significant portion of his career in Washington, D.C. Following graduation from Oregon State and the University of Oregon School of Law, Jim began his legal career as a natural resource attorney at the U.S. Department of Interior. He migrated up to Capitol Hill where he served as Rep. Al Ullman’s legislative director and on the professional staff of the House Committee on Ways & Means, which Ullman chaired (Jim also has an LLM in tax law from Georgetown). Jim began his private practice in 1981, opening a Portland branch office for Garvey Schubert Adams & Barer. Seven years later, he opened a Washington, D.C. branch for Ball Janik & Novack, continuing his commute between Portland and D.C. Jim is excited about the creation of Summit Strategies, where he will continue his work on economic development, transportation, tax and natural resource matters. Jim remains a sorely-conflicted individual, wearing both his Beaver and Duck hats with pride, while maintaining his political independence as a former Republican and former Democrat. Fortunately, Jim’s three daughters manage (usually) to keep him fed, dressed and focused on his professional career.

In 2005, Jim received the “Best of the Bar” Award in Government Law from the Portland Business Journal, based on a peer survey of Portland’s legal community. He has also earned the AV® PreeminentTM Rating from MartindaleHubbell®, American Registry.

Jim has practiced in Washington, DC, since 1976. He has served as a natural resources attorney for the U.S. Department of the Interior, as Legislative Director for Representative Al Ullman, and on the professional staff of the U.S. House of Representatives Committee on Ways and Means. Mr. Beall has been in private practice since 1981.

Contributed by the Beall family