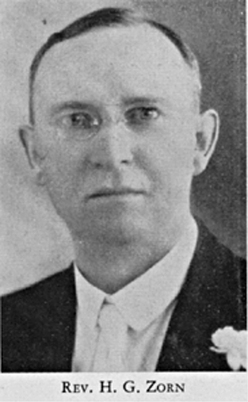 After his arrival in the U.S., Henry married Anna Metzler who was born on December 28, 1886 in Dobrinka, Russia. She was the daughter of Heinrich Metzler and Elisabeth Koch. The Metzler family became friends with Rev. George H. Graf and his wife during their time together in Chicago and Sheboygan. Anna died on April 9, 1918 in Scottsbluff, Nebraska.

Henry attended the Chicago Theological Seminary and served in the ministry for 21 years in seven states, including Oregon.

Henry married again to Emily B. Grobe who was born on October 12, 1889 at Inland, Nebraska.

Rev. Zorn served in Missoula, Montana before coming to Portland to serve the Second German Congregational Church in 1927. During his service, a new parsonage adjacent to the church was purchased and the church building was expanded. Due to a steep decline in membership, Rev. Zorn resigned in 1929.

Rev. Zorn died in Seattle, Washington on July 28, 1961 and was entombed at the Riverview Abbey in Portland. At the time of his death he and his wife lived at 5011 NE 15th in Portland.