Henry Wunsch (everyone called him Dixie) was born March 24, 1915, in Winnipeg, Manitoba, Canada. He was the youngest of seven children. His mother died in the flu epidemic when he was 3. Dixie was basically raised by an older sister. He moved to the United States with his father and older brother, and eventually ended up in Portland. He thought it was a beautiful city and decided to stay. In 1941, he married Katherine Weber. She preceded him in death on June 9, 1996. 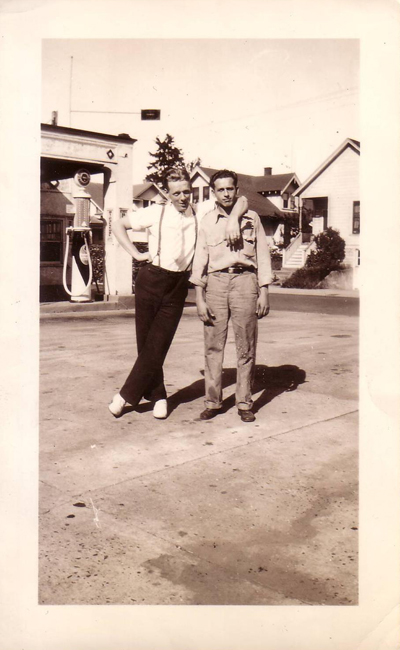 Henry "Dixie" Wunsch (right) and a friend at the service station where Dixie work. The service station was located on the northwest corner at NE 7th and Fremont. Photograph courtesy of Kris (Wunsch) Zelinka.
Dixie worked in his father’s business before starting his own business, Wunsch’s Sanitary Service. Dixie was a hard worker. But, he also liked to play. He loved baseball, music and dancing. He liked Lawrence Welk, dancing with his wife, whistling and singing. He was also a committed Christian and loved watching Billy Graham, reading his Bible and other Christian literature, and serving the Lord. He had a ministry of calling other senior citizens to encourage them and working on wheelchairs.

Dixie had a "can do" attitude. "Buck up" and "get over it" were the way he handled difficulties. He treated obstacles and hardships as learning experiences.

Dixie was a lifetime member of AHSGR, and a beloved member of the Oregon Chapter. He was also a member of Teamsters Local 220, Footprinters and Rivercrest Church. He loved his family and enjoyed getting together with all of them on Father’s day.

​Dixie died June 16, 2004, at the age of 89. He leaves two sons, Fred and Randy, a daughter, Kristine Zelinka, six grandchildren and one great-grandchild.