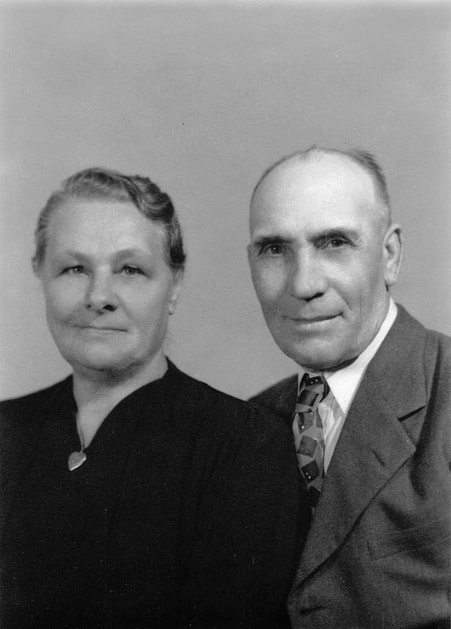 Christina and George Frueauf. Courtesy of Georgia Conway.
George and Christina knew that their future was at risk under Russian rule and chose to leave Russia and immigrate to the United States where other relatives had come before them. They departed from Bremen, Germany aboard the SS Bremen May 30, 1908 and arrived in New York June 8, 1908. With them were their sons Wilhelm and Johann Henry, George's father Carl Jacob and mother Elisabeth, George's brother Conrad and sister Amalia. Their destination was Loveland, Colorado.

From 1908 until about 1930, George farmed in Larimer and Weld counties raising sugar beets and also worked on the railroad. It took George more than seven years to pay off the debt to the relative who sponsored their passage to America. Four more children were born in Colorado, Lydia Elizabeth (1910-2001), Conrad Donald (1912-1985), Leona Mae (1915-1994), and Walter Emanuel (1918-2003). Christina worked as hard as George. She took care of the children, family garden, cooking, canning, the wash, cleaning the house and helped to spade the beet fields.

Between 1930 and 1935, the family moved to Portland, Oregon where George's brothers Conrad and William were living. By 1940, George and Christina moved to a farm in Boring, Clackamas, Oregon. It was too wet and cold for farming, so in the mid 1940's they moved to Yakima, Washington where George and daughter Lydia bought a small meat and grocery store, the Freauff Market. George cut the meat and made German sausage. It was located on Fair Avenue across from the Yakima Fairgrounds (now called The SunDome). George and Christina owned three lots behind the market. Lydia's house was behind the market. My grandparent's house was on the third lot behind Lydia's. When I visited my grandparents as child, I slept in two overstuffed chairs put together for a perfect cozy bed and my delight was getting a popsicle every day from Grandpa from the store. Their last move was to Sunnyside, Washington with daughter Lydia and sons Walter and Conrad and their wives living close by to take of them in their old age.
​
Christina passed June 1, 1973 and George passed October 3,1977. Both are buried in the Lower Memorial Garden, Sunnyside, Yakima, Washington.