​Johann Georg Rück was born on April 26, 1878 in the Volga German daughter colony of Neu-Hussenbach, Samara, Russia, also known as Gaschon. Johann Georg was the son of Georg Peter Rück (born April 24, 1850 in the colony of Merkel, Russia) and Katharina Barbara Keil (born September 13, 1854 in the colony of Anton, Russia).

Johann Georg married Anna Maria Meier (also Maier) on May 29, 1899 in a double wedding with Anna Maria's brother. Anna Maria was born on June 29, 1877 in Neu-Hussenbach, the daughter of Heinrich Jacob Meier (born about 1850 in the colony of Walter, Russia) and Sophia (born about 1850, surname and place of birth in Russia unknown). Their first child, a daughter named Amalia (Mollie), was born on May 17, 1901 in Neu-Hussenbach.

By 1902, Johann Georg and Anna Maria decided to begin a new life in America. Approvals from the village council and a Russian passport were obtained in advance. The parish pastor of Neu-Hussenbach administered their last communion rites on September 9, 1902.

In December 1902, Johann Georg, Anna Maria and Amalie departed from Neu-Hussenbach with Georg's younger brother, Georg Peter. The family traveled by ship to the the city of Saratov and then by train to Libau (now Liepāja, Latvia) where they boarded a steamship to Liverpool, England on December 12th. After reaching Liverpool, the Rück's departed for America on January 9, 1903 aboard the Canadian Beaver Line steamship Lake Champlain. On January 21, 1903, the Rück's arrived safely in St. John, New Brunswick, Canada. After a short stay in Winnipeg, the Rück's crossed the border by rail and entered into the United States on February 10, 1903 at Noyes, Minnesota.

Steamship Lake Champlain. Source: Ancestry.com
The Rück's first settled in the Walla Walla, Washington area, where a second daughter, Katharina Margaretha (Katherine), was born on April 27, 1903. George worked as a laborer laying railroad ties. In early 1904, Johann George (now George Rick) visited Portland along with an acquaintance from Walla Walla. He found there was a large and growing Volga German community and jobs were plentiful. Shortly thereafter, George and Anna Maria made a decision to relocate the family to Portland.

Georg Peter (now Peter Rick) remained in Walla Walla and married Anna Elizabeth Friese on November 14, 1907. They moved to Yakima in 1922 and operated a fruit ranch. After retiring they returned to Walla Walla.

After arriving in Portland, George worked at the Eastern & Western Lumber Company for six years. Mill jobs were physically demanding and required long hours of work. George was paid $1.75 for 10 hours of work planing lumber to specific dimensions. The mill was located on the west bank of the Willamette River at the foot of NW 21st Street (now 2500 NW Front Avenue), about 4 miles from where George lived east of Union Avenue (now MLK Blvd.). George walked to work and back to save the 5 cent fare required to ride the streetcars. 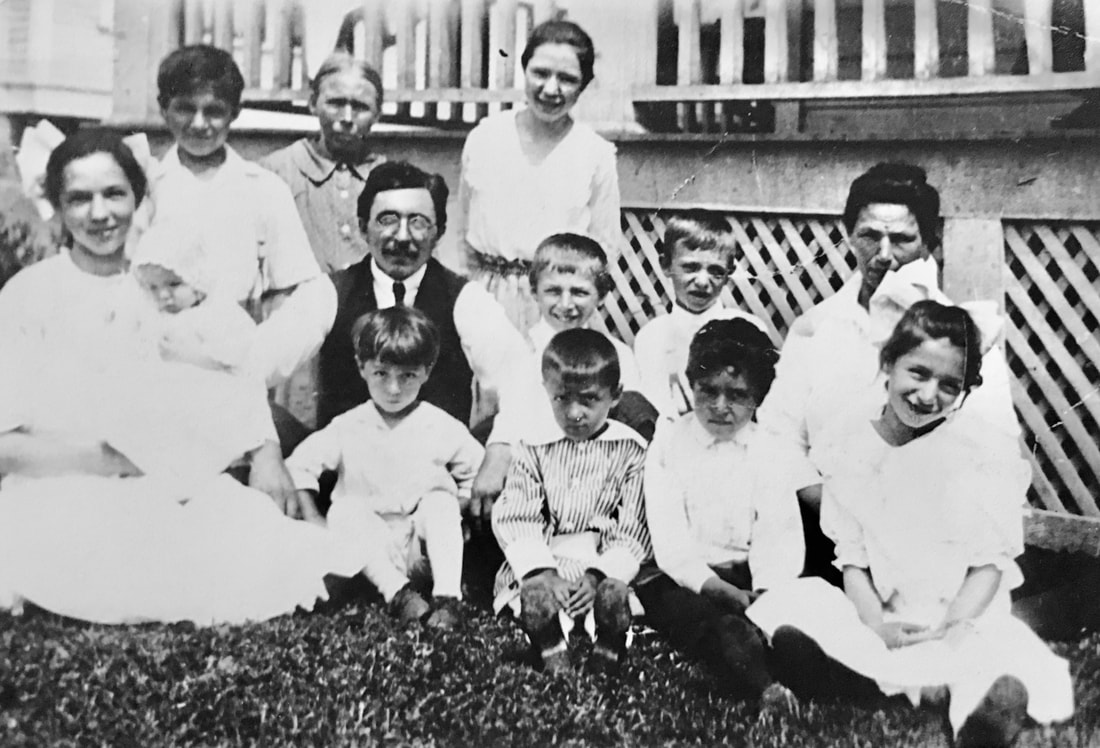 On June 15, 1908, George's mother Katharina arrived in New York City aboard the steamship Prince Friedrich Wilhelm which sailed from Bremen, Germany. Katharina soon joined her family in Portland. Sadly, Georg Peter Sr. died on January 21, 1909. He was buried at the Rose City Cemetery.

By 1910, George had quit his job at the mill and and used his savings to purchase a buttermilk wagon and a horse named "Old Nick". Mollie, Katherine and Carl helped George with deliveries on Saturday's. George used a scythe to cut hay for "Old Nick" in the new Laurelhurst development (formerly the Hazel Fern Farm owned by the Ladd Estate Company). At the time, the Portland City Directory shows that the Rueck family resided at 549 Failing Street (now 1225 NE Failing Street).

In 1914, the family name was changed from the phonetic spelling of Rick to the correct German to English transliteration of Rück to Rueck, where the "e" is inserted to represent the missing umlaut over the "u".

The Rueck family were members of the Ebenezer German Congregational Church led by Rev. John Hopp who lived near them in NE Portland.

By April 9, 1921, George had sold his garbage hauling business and the family moved to the community of Scholls in Washington County where they acquired a farm on Scholls River Road (now 13140 SW River Road, Hillsboro, Oregon). The Rueck's started with only 3 cows and began to grow wheat, oats, filberts and walnuts. In the early years, life on the farm was harder than life in Portland and family income dropped sharply. George worried that he had made a mistake selling his garbage hauling business.

George's mother, Katharina, died on December 10, 1921 in Scholls. She was buried at the Rose City Cemetery in Portland.

Over time and with much hard work, the farm became successful and the Rueck's continued living at this location for many decades. Ownership of the farm remains with the family to this day (May 2018). 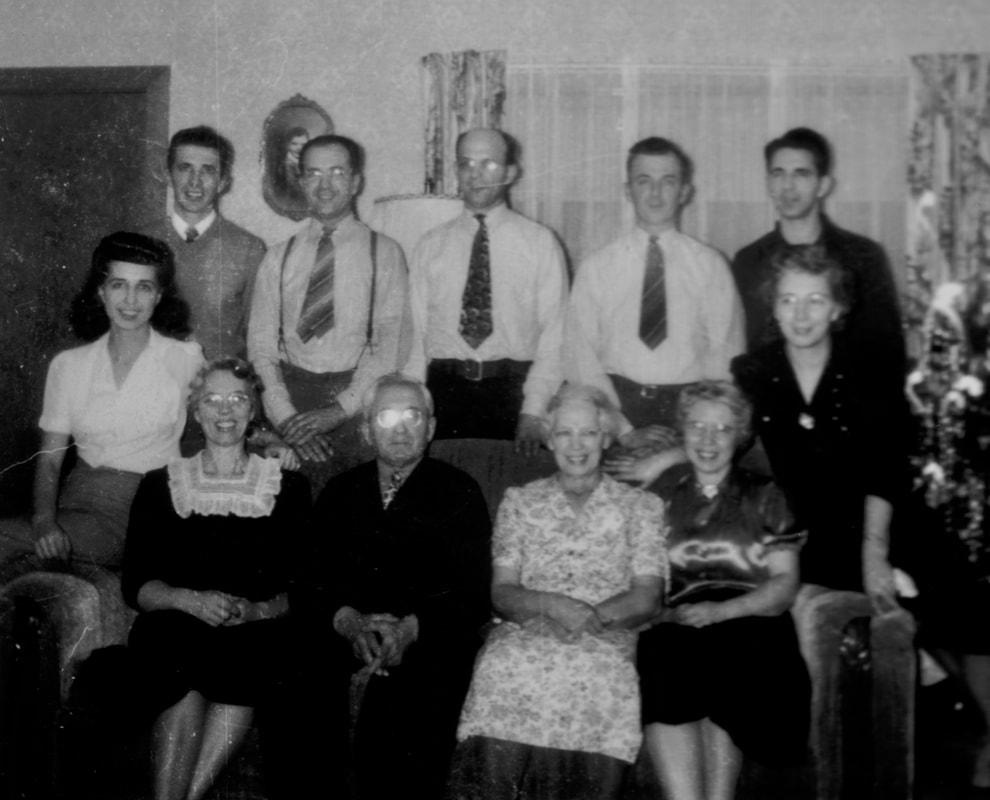 Photograph of George and Anna Rueck with their children in Scholls, Oregon about December 25, 1935. Back row standing from left to right: John, George, Jr., Sam, Carl, Ray. Front row seated from left to right: Flora, Katherine, George and Anna, Mollie. Photo on wall: Grandson, Donald Rueck. Photograph from the Katherine Rueck Family Albums Collection. Photographer unknown. Courtesy of Trina Kay McConnell.
George received heart breaking letters from family members in Russia during the famine years of the 1920's and 1930's. It is likely that George supported the Volga Relief Society which was founded in Portland. Although contact was lost after Stalin ordered the deportation of the entire Volga German population to Siberia and Central Asia in 1941, George eventually reconnected with branches of his family who were then living in Kazakhstan and Siberian Russia. 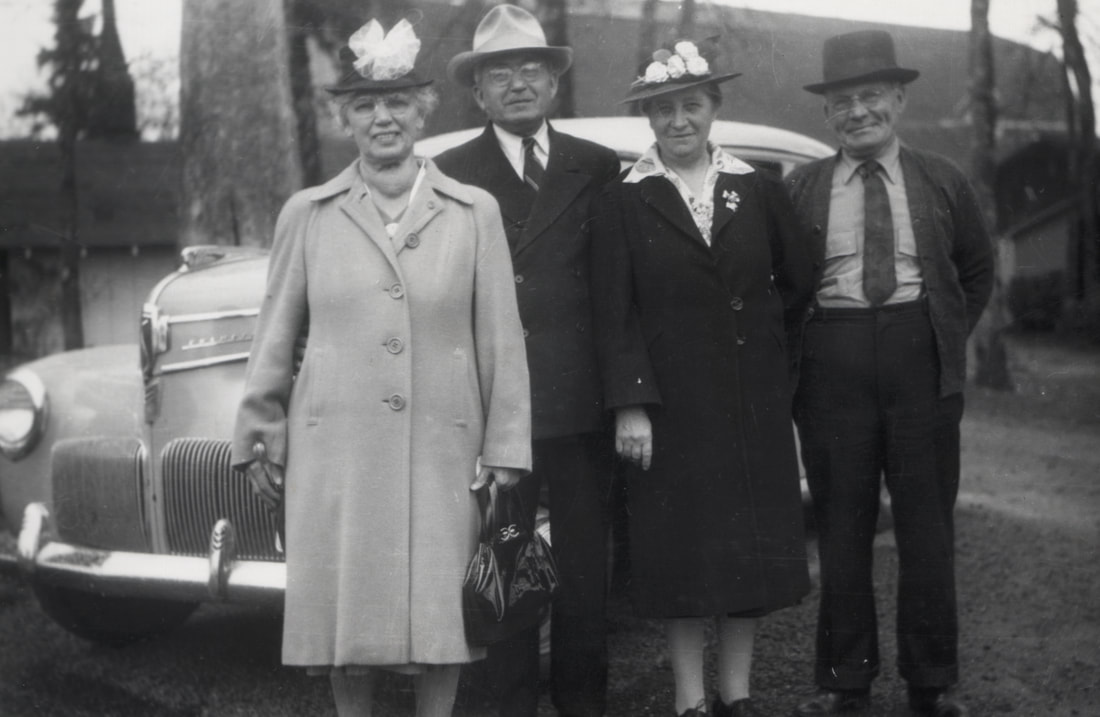 Photograph of the Rueck brothers and wives in Scholls, Oregon in the late 1930’s. From left to right Anna M. (née Maier) and George Rueck, Anna E. (née Friese) and Peter Rick. Photograph from the Katherine Rueck Family Albums Collection. Photographer unknown. Courtesy of Trina Kay McConnell.
On May 31, 1959, George and Anna Maria celebrated 60 years of marriage at an open house attended by about 36 family members and 75 friends.
Anna Maria died on April 19, 1962 at the farm in Scholls and was buried at the Finley-Sunset Hills Memorial Park Cemetery.

Through calculated risk taking and hard physical labor, George and Anna Maria were successful in their new homeland. Their foresight provided their children with all the advantages of a life in America. Many of the descendants of George and Anna Maria Rueck continue to live in Oregon to this day.

Rueck, George. Transcript of an interview with George conducted by Don Neal who was assisted by George's daughter, Katherine Rueck. The interview was recorded in the spring of 1968 at the Rueck farm.