Elmer C. Reider, a Portland flag merchant who was popularly known as the "Flag Man of Oregon," died Wednesday in a Portland hospital of complications arising from a coronary artery lesion. He was 64. 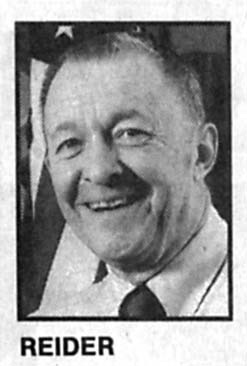 Elmer Reider. Source: The Oregonian.
A funeral will be at 11 a.m. Monday in the Portland Foursquare Church. Burial will be in Rose City Cemetery.

Renaming the company Elmer's Flag & Banner, he went on to build the business on Southeast Grand Avenue into what its vendors claim is the largest flag business in the Northwest. It has the largest flag showroom west of the Mississippi, according to his son, Michael Hale, who manages the store.

Bill Hammerbeck, manager of H.E. Edwards stock brokerage in the Lloyd Tower and a close friend of Mr. Reider's for the past 20 years, said “He's been a great guy and he represents the flag as far as I'm concerned.”

He said Mr. Reider was as dedicated to Christian principles as he was to patriotic ones. “He's a giver,” he said. “His Christian commitment really showed through in everything he did.”

Michael Hale said his father was “the kind of person who believed we needed to respect symbols of authority, including the flag. He loved to serve people,” he added. “He sold service.”

Mr. Reider stocked more than 9,000 varieties ties of flags, said his son, including thousands of American flags, pennants and decorative buntings in shapes and sizes that ranged from a 2-inch pin to a 12-by-18-foot behemoth.

He also carried the flags of more than 300 foreign countries, as well as magnetic signs, psychedelic banners and all manner of flag-related accessories.

Despite the colorful smorgasbord of national and cultural symbolism that surrounded him, his heart belonged strictly to the Stars and Stripes of the red, white and blue.

Dung a 1974 interview with The Oregonian, he proudly stated “Old Glory always seems to me to have no competition for all-around beauty.”

Warming to his subject, he added:  “I still get a tingle out of seeing our flag in a parade or at some special event.  It's a symbol of a great nation and I think it has a special meaning for every American.”

His knowledge of the lore of the American flag, which extended to its earliest beginnings during the American Revolution and how it got the name “Old Glory,” earned him the nickname, the “Flag Man of Oregon.”

He was named president of the Portland Americanization Council in 1974. During the 1980s, he also was involved with the American Naturalization Council, helping to swear in new U.S. citizens “He gave the new people flags,” his son said.

Mr. Reider was a member of the Portland Foursquare Church, the Christian Businessmen’s Club and the Eastside Commercial Club.

He served on the Northwest board of Wycliffe Bible Translators and had been a board member of Officers Alive and the Salvation Army's social services program.

Born May 26, 1927, in Portland, he was a lifelong resident of the city.  He attended Sabin Grade School and was a 1945 graduate of Jefferson High School.

The family suggests remembrances be contributions to the Christian Businessmen’s Club or to Luis Palau Ministries.

Elmer Reider was the son of Katherine "Blondie" Knippel and Carl Reider.