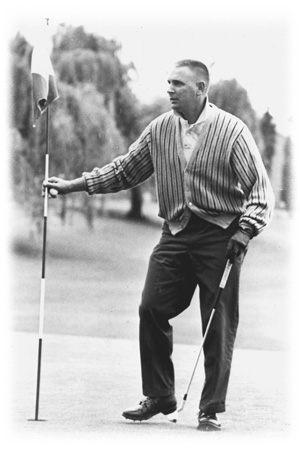 Don Krieger. Source: Pacific Northwest Golf Association website.
Krieger won the 1948 Oregon Junior title as a member of Broadmoor Golf Course in Portland. Krieger was one of the players who dominated the Oregon Amateur for 15 years beginning in the mid 1950s.

Krieger's career accomplishments include:
Krieger was inducted into the Pacific Northwest Golf Hall of Fame in 1993.

Don's family developed, owned and managed the Broadmoor Golf Course in Portland. The course dates to 1931 when his mother and five aunts converted their parents Rose City Dairy operation into a 18-hole public golf course. A friend named George Junor designed and supervised the layout. The course opened on Labor Day 1931 and was popular from the start. Play was heavy until the winter months arrived. The depression made it difficult for people to afford the thirty-cent greens fee. As a result, the sisters performed most of the duties themselves and turned the course into a destination for activities other than golf. Dances held in the clubhouse, pheasant hunts, sledding and tobogganing provided entertainment and additional income throughout the depression.

In 1948, the Columbia River burst it's banks and buried the course under fifteen feet of water and six feet of mud. Charlie Beauford, the greenskeeper at the time of the Vanport Flood, saved all of Broadmoor's greens by waiting for them to dry, scraping them clean, and replanting.