​Adam Leichner and Catherine Maria (née Justus) had three sons - Philip, George, and Conrad. They also had one daughter, Helen Christina. All were born in the colony of Huck in Saratov Province. All four of the children immigrated to the United States, but their parents did not leave Russia and may have been deceased when their children came over.

My family said that my great grandfather, Conrad, knew what was coming in Russia and felt they had to get out. He had been conscripted into the Russian Army and I have a large picture of him, in an oval frame, in his Russian uniform. Conrad's family came to the United States in 1907. Conrad's brother Philip was already in the United States and possibly encouraged him to come. 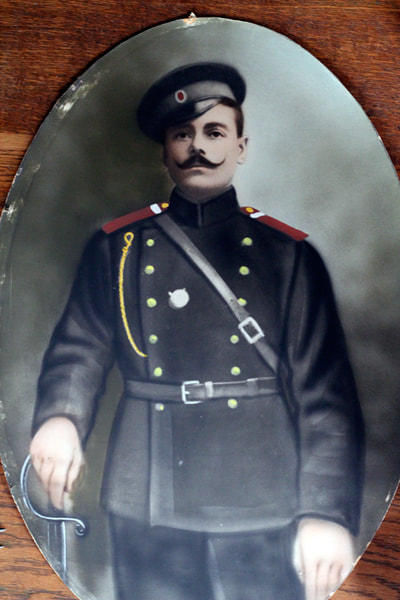 A hand colored photograph on cardboard of Conrad Leichner in his Russian army uniform. Courtesy of the Leichner family.
​My great grandfather also helped his in-laws to emigrate. Their names were Lorenz Luther and Catherine E. Lofing (Lofink), my great great grandparents. Lorenz was a watchman for the railroad for several years but then was stricken with dementia. They lived next door to Conrad and Margaret and brought a huge brass samovar from Russia with them. The samovar is still owned by a family member.
​Philip Leichner, the first of the children listed above, had 5 children. One of his sons was also named Philip. He is the one pictured in the photo with the garbage truck (see below). This side of the family had a large garbage hauling business and had a dump site in Vancouver until just a few years ago. There are a number of descendants from both Philip Leichner's, some still live in the Vancouver, Washington area. The first Philip came to the U.S. in 1903. 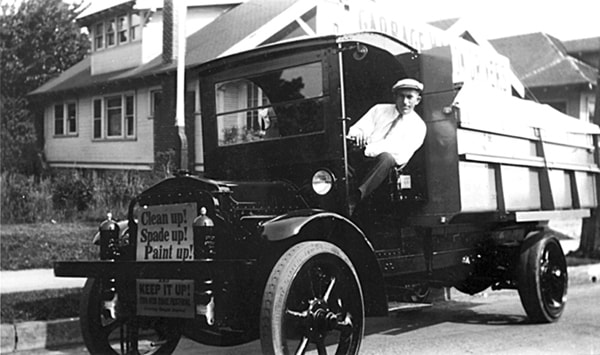 Philip Leichner with new garbage truck. Courtesy of Marie Trupp Krieger.
​My great grandfather, Conrad Leichner, was Philip's brother. Conrad was a builder and constructed a number of homes in Portland.

Conrad Leichner built homes for several Volga Germans: Henry Geist (1910), Mr. Hergert (1910), Conrad Yost (1913), George Hohnstein (1924), Peter Miller (1911), L. Schnell (1914), George Schreiber (1910), P. Schreiber (1910) and John Spady (1910). These names are from building permits that were drawn and recorded in The Oregonian Newspaper.
​My grandfather, John Leichner, also learned the construction trade from his dad and they built a number of places together. They built the family home at 775 E 14th Street, which is now just off NE Fremont Street in Portland. I know of another house they built just across the street from this one. They also built a huge barn way out Sandy Blvd. that was still standing until a few years ago. I have a barn that is 36 feet tall and 56 feet long, but the barn Conrad and John built would eclipse mine. My grandfather John took my grandmother, Vivian, to see this barn on their first date.
​I think it is interesting that my great grandfather spoke very little English and did not drive, yet had a thriving contractor/building business. All his calculations related to building were done on an abacus, which my grandmother gave me when my grandfather died in 1979.

A cousin of my grandfather, Marie Schreiber (née Niederhaus), once showed me some letters from Russia that were sent here during the great period of starvation in the 1920's. They begged for the family to send food and told of many friends and family members dying. The letter claimed, according to the translation, that some ate my great great grandfather. She also had receipts showing packages and money was sent. After this time they quit hearing from relatives in Huck. They supposedly were sent to Siberia.

My great grandparents and their family were original members of the Second German Congregational Church at NE 8th and Skidmore. I have a sad photo of the inside of this church and of my entire family. It was a funeral for Conrad and Margaret Leichner’s oldest son, also Conrad. He was killed after he grabbed onto a milk truck while on roller skates and collided with a telephone pole when the truck rounded a corner. I think he was about 12 years old. An old relative of mine, long ago, wrote all the names of the people in the photo on the back. It is a rather macabre photo with Conrad in an open casket with everyone, of course, looking very sad. It is the only photo of young Conrad. He is buried, as is the rest of the family, at the Rose City Cemetery. 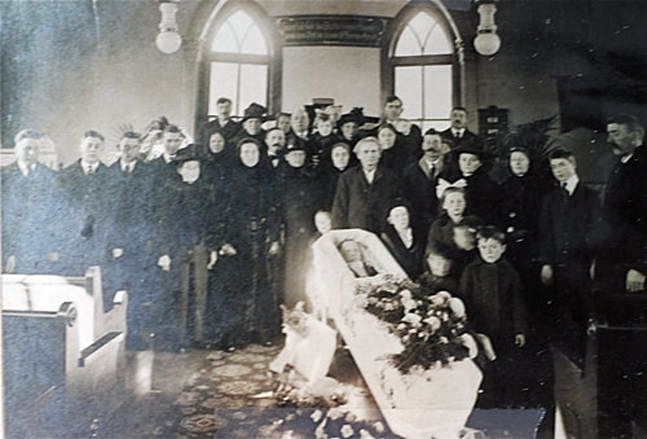 Funeral of Conrad Leichner, son of Conrad and Margaret Leichner. He died after grabbing on to a milk truck and then being crushed between a telephone pole and the truck. He lived for about a day after the accident and died from internal injuries. He is buried at Rose City Cemetery. This is the entire Leichner and Luther family along with some Niederhaus family members. My great great grandfather Lawrence Luther is immediately behind casket. Conrad Leichner is behind him and to his left. Margaret Leichner is to the left of Conrad. Elizabeth (Betty) Leichner, the girl with the bow, is in front of Margaret. Marie Leichner is to the right of Elizabeth. Phillip Leichner is standing right in front of Elizabeth (he is blurred). Alvin Leichner is standing right next to the casket and just in front of Phillip. John Leichner, my grandfather, is standing next to Alvin. The next child born to Margaret and Conrad Leichner would be be named Conrad Leichner. The man to the far right of the photo is George Leichner, Conrad's brother. Conrad and George's brother Phillip is also in attendance and their sister Helen Christina. Photograph and caption courtesy of Marc Trueb.